Imagine a state that offers stunning beaches, snow-capped mountains, and a multitude of lakes, streams, and rivers. That's exactly what you'll find in California. This is a state that you can truly build an entire vacation around. Not only that, but you will enjoy each and every moment of it. California presents year-round fishing so that no matter when you visit, you’ll find some fabulous opportunities.

Due to the diversity of the terrain it’s also appealing to all skill levels. You’ll find areas that keep the experts challenged, then those gentler streams and creeks that are perfect for learning new skills. To keep things simple, anglers tend to break the state up into the northern and the southern regions. Each of these regions is unique, and will offer its own types of conditions. California fish species include various types of trout, salmon, and the famed steelhead.

So let’s get started and examine what this incredible state has to offer in terms of fly fishing. 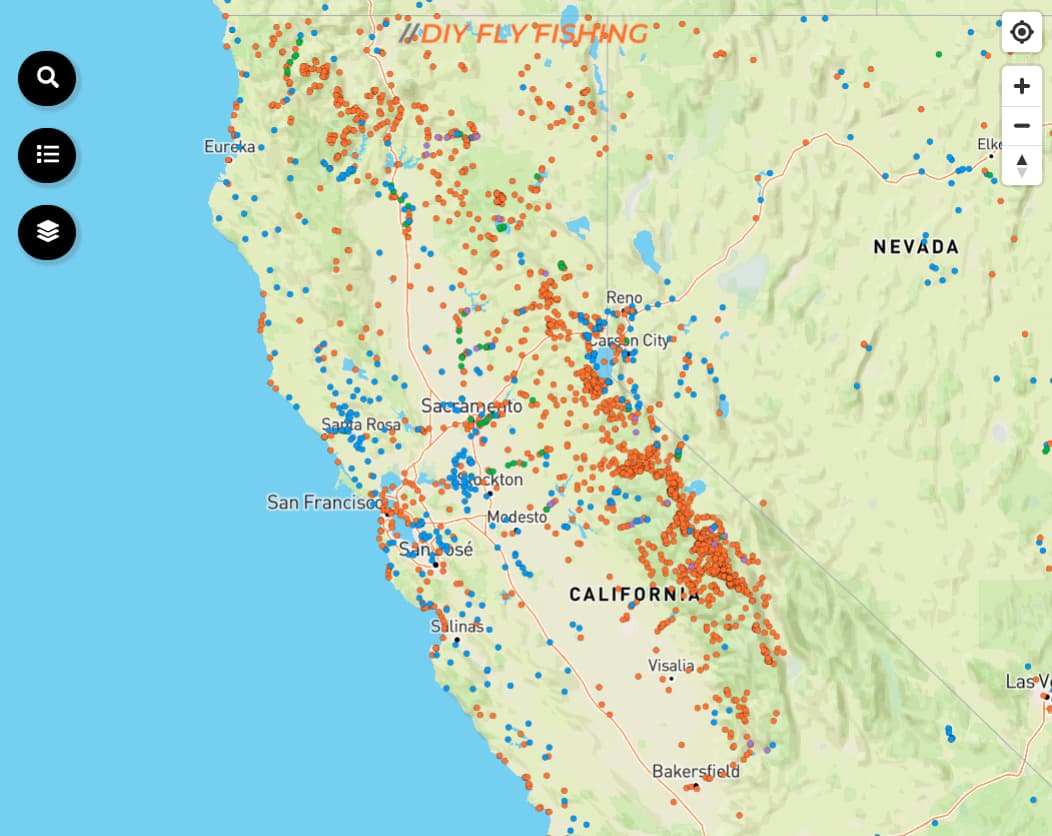 Best Places to Fish in California

California isn’t just exciting because of its wealth of movie stars, it’s also perfect for fly fishing. Both the north and south of the state offer their own unique waters, filled with a variety of species. Here’s a look at some of the top spots to fly fish in California.

The East Fork of the Carson River is a perfect example of a mountain river that is serene, beautiful, and ideal for fly fishing. This one is located near Markleeville and fishing is open all year-round. If you want to fish during the "prime" times, be sure to visit from May through October. Here you will be able to catch mountain whitefish, cutthroat, rainbow, brook, and brown trout. In the upper areas the river flows very fast and is quite narrow. You'll find pools, runs that are deep, plenty of riffles, and even some rapids to give you that extra variety. You can fish this one by shore, wading, or by boat.

This is actually a nature conservancy, as it is a trout fishery. McCloud River can be found near the city of Algoma and is known for its brook, brown, and rainbow trout. The skill level is rated at moderate for this river, and the fishing season runs from April until about midway through November. It’s incredible just how many other waters are stocked thanks to the McCloud River. The river is located in a canyon that is completely surrounded by thick, lush forests. It offers that serene peace and quiet that anglers tend to love.

Hat Creek is classed as trophy water for wild trout. There are sections of this creek that are incredibly challenging, while others are slower paced and more relaxed. The fish species here are brown and rainbow trout. Both these fish love the brush that lines the banks of the river, as it acts as the perfect hiding places for them. The season runs from April until about mid-November. The closet nearby city is Burney.

Owens River is located by Mammoth Lakes and is classed as a moderate skill level. It can be divided into a lower and upper portion, with each providing its own experience. You will be fishing for rainbow and brown trout in this river. The season runs from April until mid-November.

Hot Creek itself is a decent sized creek, but much of it is private. Don't let that stop you from visiting the public areas, as the trout are usually quite large. The well-known Hot Creek Ranch is located on a portion of this creek, which is one of the private areas. There is a lot of diversity along this creek as the water changes along with the scenery. Hot Creek is open year-round.

Piru Creek and Deep Creek are unique in that they are located just outside a major city. With that said they are both quiet and beautiful. Both can be found just one hour outside of Los Angeles, not far from the city of Castaic. They make for a great half or full-day fishing trip. The creeks are open year-round and you'll be fishing for trout. Here's one of the best parts, Piru Creek is an urban wild trout fishery. This means you are in for some fabulous fishing. The fishery was put in place by the California Department of Fish and Game, Cal Trout, and the Sierra Pacific Flyfishers. Obviously, your accommodation options are vast since you are so close to a major urban city.

This is a state that welcomes anglers all year-round in the northern and southern regions. There are fabulous opportunities to be found every month. If you’re the type that likes to “match the hatch”, as so many anglers do, you’re also in luck. There are hatches happening all year here.

As far as the temperature/climate goes, it varies quite a bit depending where you are in the state. You will find everything form a subarctic to desert climat﻿﻿e all in one state. The majority of the state has a Mediterranean climate. This means that winter is fairly mild but wet, while summer is hot and dry. Fog can often be found along the coast. The further inland you go in California, the warmer and dryer it gets in the summer. Winters aren't quite as cold inland, but they are wet. Obviously once you start heading into the mountain regions, the temperatures start to cool down. These regions experience all four seasons instead.

Because California is such a large and diverse state, it’s best to break it up into two regions when discussing the hatches. The north and south of Cali﻿﻿fornia experience different hatch seasons, so you will want to be aware of this before heading out. Here’s a look at the average hatch schedule.

Caddis Flies: These are found between the months of March through to the end of August. They are at their peak in April and May.

Mayfly: You'll find this one hatches throughout the year except for maybe May. The summer months are a bit more intense for these hatches.

Terrestrials: Typically, these will be hatching between June and October, with August being the peak month.

Green Rock Worm: These can be found between April and August.

Stoneflies: These can be found from January through May, but they are at their peak in March.

Stoneflies: These start up in February but are heaviest in March.

Nymphs: There are varieties of nymphs and at any point of the year one or more may be hatching. Months that see higher hatch numbers are May, June, October, and November.

Little Yellow May: These occur in June in full force and then taper off in July.

March Brown: You'll find these from February until early May. The month of March is when they are the heaviest.

If you are heading to one of the larger rivers, lakes, or streams in California, you can make use of nine and nine-and-a-half-foot fly rods. If the smaller fishing holes are more your style, be sure to opt for a shorter fly rod. If you do this, you’ll also need to adjust your weight so it stays in balance.

Within the state are places to fish from shore, wading, by float, and boat. You can take all of these into consideration as you plan out the gear you pack.

Of course, when it comes to the flies, matching the hatch is usually a good starting point. Besides that, you need to examine where you plan to fish, what time of year, and the type of species you will be catching. As is the case in any state, visiting a local fly shop can ensure you stock your tackle box with the best flies.

The state of California requires that all people who are 16 years of age and older have a valid fishing license. There are resident and non-resident sport fishing licenses available. You can purchase a one-year, 10-day, two-day, or one-day license. Some areas also require a permit. You can purchase the license and learn about the most current regulations through the California﻿﻿ Department of Fish and Wildlife.

Exploring the many fly fishing options in the state of California involves breaking it into the northern and southern regions. Neither should be missed, and both offer fishing year-round depending on where you go. The fact that you can visit an urban city like Los Angeles and still find fly fishing just one hour out of the city speaks volumes about this state. Choose between freshwater and saltwater, small out of the way creeks, or large lakes, there is no end to the beauty and fishing.