The Silver State is well known for its desert highways and imposing mountaintops, and even better for the lights and wild activity of Sin City. But if you’re seeking some western fly fishing action, don’t despair – the state actually has many scenic rivers and waterways to suit any angler’s desires. 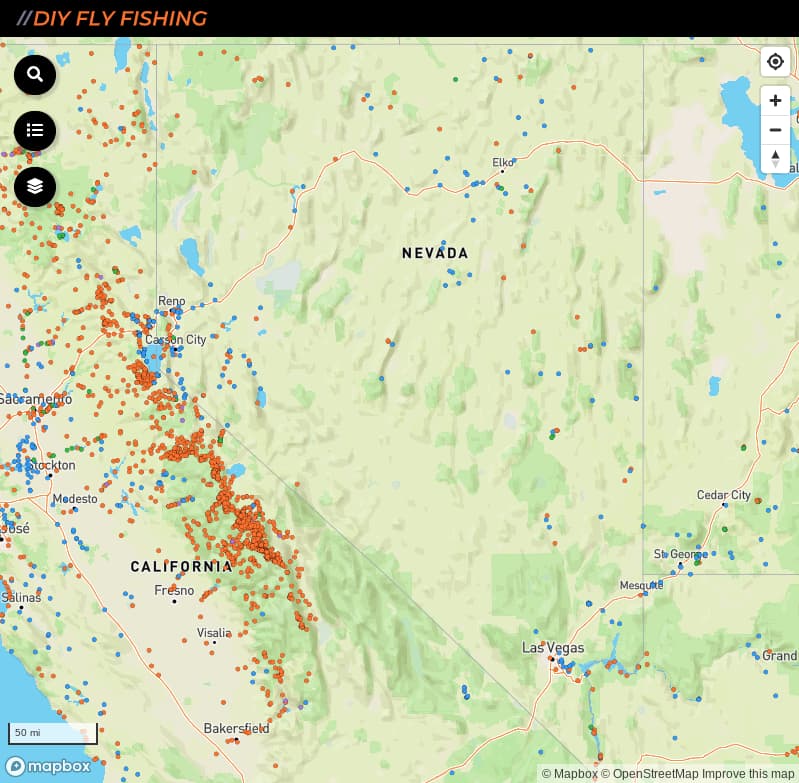 Best Places to Fish in Nevada

You might think you’d have a challenge even finding one or two places to cast your line in this driest of environs, however surprisingly, Nevada is home to 600 rivers and streams, and more than 200 lakes. This is just a handful of the favorites that are well known as both challenging and rewarding to the novice and veteran fly fisherman alike.

South Fork of the Humboldt River

This favorite fishing hole is located in the upper east quadrant of the state. The South Fork Dam divides the river into two parts, upper and lower, with the upper portion running seven miles up to Route 228 and the lower flowing about 12 miles downstream to the Hunter Banks Diversion Dam.

Though the river itself is not stocked, trout are plentiful due to migration up and downstream from the South Fork Reservoir which is stocked yearly. Game fish include rainbows, browns, bowcutts (a rainbow cutthroat hybrid), smallmouth bass, and channel catfish. Some large specimens have been caught here, up to 20 inches or more.

Upstream of the reservoir you may keep one trout and only use single, barbless hooks. Downstream there is a five trout limit. Access is available via the state park off Route 228 and from Bullion Road near Elko.

Originating in the Sierra Nevadas in California, the East Carson River flows from the state border, wending its way 21 miles before joining the Carson River West Fork. You’ll find rainbows and browns in this stocked, put-and-take waterway, with the best locations being Ruhenstroth Dam and Centerville Bridge in Gardnerville.

This urban fishery is a great place to take your children fishing. Public access is available at Ruhenstroth Dam, as well as at the bridge. There is a daily limit of five trout.

This impressive waterway begins at Lake Tahoe and continues for 110 miles before meeting up with Pyramid Lake, with 40 miles of the stretch lying in Nevada Department of Wildlife territory. The Truckee, which flows directly through downtown Reno, is a wildly popular local fishing spot, providing productive angling for rainbows, browns, and cutthroats. The river receives stock of rainbows in the 50,000 range between spring and fall.

While the Truckee River begins in California with plenty of riffles and pockets, after its cross over into Nevada the Truckee slows down and exhibits long runs and the occasional riffle. There is a Trophy Section just over the Nevada border that has been known to yield some 10+ pounders.

Public access is available at Mayberry Park, Crystal Peak Park, as well as points throughout Reno on West 4th Street. The limit is three game fish per day.

This put-and-take fishery is situated within Spring Valley State Park, on the southeastern side of the state. The waters are stocked annually, with rainbows, browns, and tigers (a cross between browns and brookies). The number of fish stocked typically ranges in the 40s of thousands, offering anglers ample opportunity fill their creel on a daily basis.

The other advantage of this reservoir is that there are two campgrounds available – one with 36 sites including tables and grills, and a spillover with six sites. The larger campground has three bathrooms, two of which have showers. Day use amenities include grills, picnic tables, a launch ramp, and even a fish cleaning station. The general statewide regulation of a five trout limit is active at this fishery.

Best Time to Fish in Nevada

Most fisheries offer year-round action in Nevada. One of the interesting things about the state, as opposed to most others, is that the majority of fisheries are open any time of the day or night – so you can pull up in the late evening, pitch your tent, and go ahead and cast away.

Fishing on the Humboldt River is best between March and June, and then in September through December.

The East Carson River is stocked with rainbows in March, April, June, and July, and with browns in the fall. Spring and late autumn are generally the most fruitful on these waters due to the lower water temperatures.

The Truckee typically experiences high flows from March to June, keeping anglers at bay, but in early summer and fall the fly fishing is very productive. Stocking occurs between March and September and runs around 50,000 10-inch sterile rainbows.

Eagle Valley is stocked from March through June and then again in the fall, so spring and autumn are generally the most productive but there is good fishing there year-round.

No fishing trip to Nevada would be complete without a trip to Great Basin National Park where you can fish for native Bonneville Cutthroat trout.

Find out all you need to plan your trip in our DIY Guide to Fly Fishing Great Basin National Park.

Standard trout gear should do for most of your fly fishing in Nevada. A 9-foot, 5-weight rod with a 9-foot leader and 4X tippet, accompanied by a floating weight-forward fly line should do fine.

Hatches in Nevada trout streams include a variety of mayflies, caddis flies,  stoneflies, and midges.  Dry flies and nymphs that best match the hatch will put the most fish in your net.  Streamers that imitate bait fish, sculpins and the like are also effective.  Stock up on a variety of patterns or stop in a local fly shop to see what is hatching.

Persons age 12 and up require a fishing license in the state of Nevada. For youth age 12-15 the cost is $13, and for those 16 and up it’s $29. Those age 65 and older may purchase a license for $13. Non-residents may purchase a fishing license for $21 for youth age 12-15 and $69 for those 16 and up. A trout stamp is also required for those wishing to fish for or take trout. This is available to both residents and non-residents for $10.

Your Adventure Awaits You

Nevada is a land of many contrasts – from the snow-capped mountain peaks to the lush valleys and sandy expanses, the state has much to offer in the way of just scenery alone.

But for anglers it also provides a wide variety of opportunities to get away from it all and lose yourself in the tumbling waters of a cold stream or the foliage-lined banks of a meandering river.