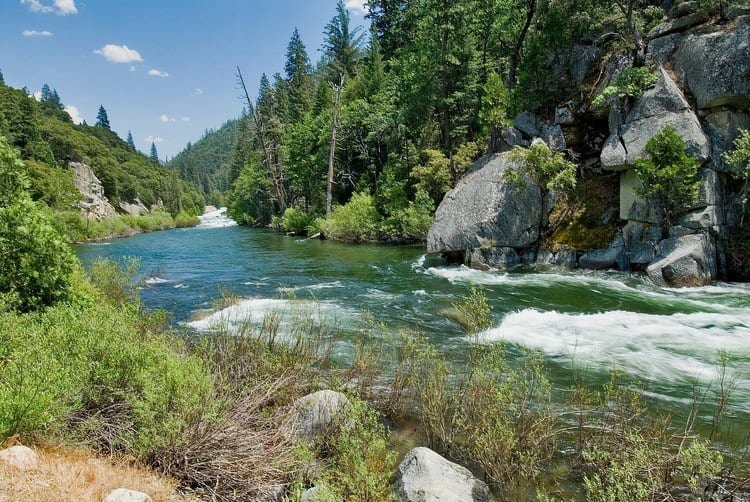 You’re not likely to find the largest fish in the South Fork of the Kings River in California. In fact, the trout in these waters typically fall somewhere in the six to eight inches range. But the River makes up for its lack of sizable fish with sheer quantity.

The South Fork is teeming with brown and rainbow trout, and is often cited as one of the best trout fisheries in the Sierras.

Of course, just because the waters are brimming with trout doesn’t mean it’s going to be a walk in the park.

Check out our guide so you can figure out exactly what makes the trout of the South Fork tick.

The South Fork of the Kings River in California is a 44.1 mile long tributary of the Kings River in Fresno County. It originates from Kings Canyon National Park and flows south, and then southwest. The River then flows into Paradise Valley, where it is joined by its tributary, Woods Creek. Below the Valley, the Fork flows into a narrow gorge, dropping over Mist Falls, a large and scenic waterfall. It then enters Kings Canyon and receives Bubbs Creek.

Passing through Cedar Grove, the Fork receives its largest tributary, Roaring River, before it reaches the deepest part of Kings Canyon. It is joined by Boulder Creek from the south, and joins the Middle Fork of the Kings River outside of Kings Canyon National Park in the Monarch Wilderness.

There are early records of Chinook salmon being found in the South Fork, and the River was once stocked with golden trout. However, according to the California Department of Fish and Game, the only fish you’ll find now in the South Fork are rainbow and brown trout, and the Sacramento suckers.  While the trout in these waters are typically small, larger catches have been documented here, and have measured up to 14 inches in length.

The section from the confluence of Copper Creek to Boyden Cave has a two trout limit. Above Cedar Grove, the flow slows down and the water is much calmer. This is a great place to catch brown trout, and it’s a good idea to look for fish in the pocket water.  Focus on deeper pools that are three to four feet deep, and look for micro eddies along the shore.

Access to the River will require a hike, and you can use the numerous trails, such as  Horseshoe Trail, to reach the South Fork (see map).

The South Fork of the Kings River is open year round, although the road to the River is typically closed after November 8 and doesn’t reopen until late March. In general, the Fork is fishable by the end of April, but if there are late periods of run off that year, the Fork might not be fishable until late June.

If you are visiting in April, you’ll want to concentrate on Golden Stoneflies, but in September, the spotted Caddis is the most important hatch.

A 9-foot 4-wt fly rod with floating line is perfect for fishing dry flies and small nymphs on the Kings River (South Fork). A tapered 9-foot leader, with tippet size 3X to 5X to match the flies you are throwing, is pretty standard.

Area fly shops, guides and websites that can provide the Kings River (South Fork) fly fishing report are listed below:

The nearest airport to the South Fork of the Kings River is the Fresno Yosemite International Airport. Keep in mind that you can travel to any major or municipal airport in Central California and arrive at your destination after a few hours of scenic driving.

The Sentinel Campground located in Kings Canyon National Park is an excellent choice if you are looking for a family friendly camping experience. They have a convenience store, clean bathrooms, and nearby shower and laundry facilities.

If you are interested in indoor lodging, the Days Inn in Fresno is the perfect place for the budget-minded fisherman. They offer affordable rates, a seasonal outdoor pool, and a restaurant.

The South Fork of the Kings River has a reputation as a quality wild trout fishery, and it’s not hard to see why. If you stick to the pocket water and match the hatch closely, you will be able to find success at these waters.

DIY Guide to Fly Fishing the Truckee River in California

DIY Guide to Fly Fishing the Cosumnes River in California