On the northern border of Sequoia National Park lies the majestic redwood and cedar groves of Kings Canyon National Park.

Covering over 460,000 acres, the park was established in 1890 as General Grant National Park. The third largest tree in the world, the General Grant Sequoia, is found in Giants Grove area of the park and is the reason the park originally bore his name.

The two parks combined encompass 1.5 million acres, and provide some of the most beautiful landscapes in the Eastern Sierras.

Shaped by glaciers, the many rivers and lakes of Kings Canyon are home to wild trout of every variety, including the rare California Golden Trout.

The higher altitude lakes are gorgeous and crystal clear due to insufficient plant life and low mineral nutrient content. There are some non-native trout species to be found in the these waters that are stocked by the California Department of Fish and Game each year.

The chief advantage to visiting the lakes lies not necessarily in the lake waters themselves, but in the tributaries that feed into and flow outward from the glacier-carved lakes and into surrounding wilderness.

Most of the major fishing areas are accessible from the two highways that wind their way through the park itself on the way to Sequoia or Yosemite, and to the south and west.

For the lakes, lake-fed streams, and the best fisheries on the major rivers in Kings Canyon, more than likely you will need to camp out at one of the lodges or campgrounds in the park before making the day-long hike out to the inner reaches of the wilderness in search of wild browns, rainbows, and cutthroats. 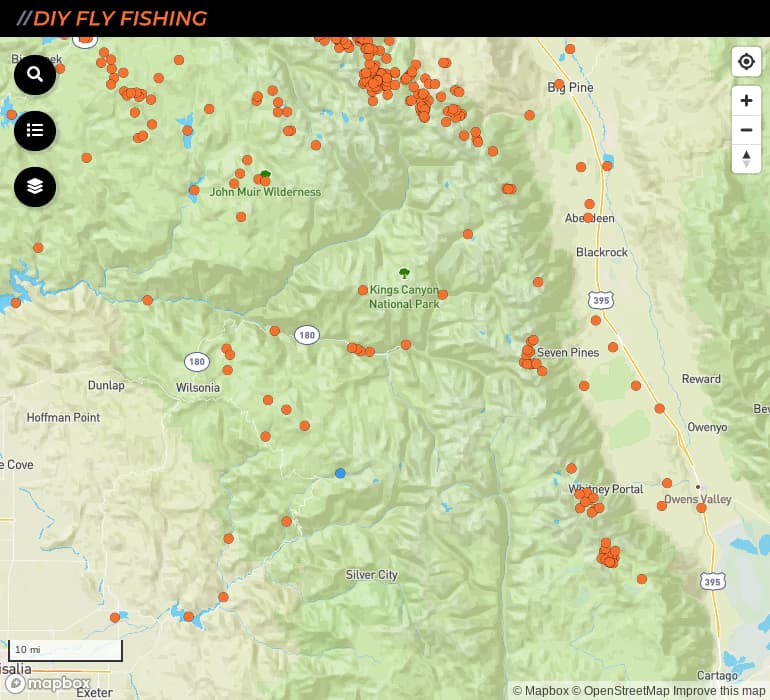 Many of the rivers, streams, and lakes in Kings Canyon are shared with Sequoia National Park to the south, but there are many fisheries inside the borders of Kings Canyon you must visit if you are in the area for some wild trout fly fishing. Here are our top recommended fly fishing locations for Kings Canyon National Park.

Accessible from Highway 180 out of Fresno, take the Trimmer Springs road all the way to Piedra, which lies below the Pine Flat Reservoir. There are three sections of the Kings that all provide a different type of fly fishing experience.

The Upper Fork of Kings River above Pine Flat Reservoir is designated as Wild Trout Water by the California Department of Fish and Game for the 20 miles of water between Boyden Cave and the confluence of the Middle and South Fork at Garnet’s Dike. This is where you go for those monster rainbows and cutthroats.

This stretch of mountain meadowland is easily the most beautiful high country in the Sierra Mountains.

To the south end of the valley is Evolution Lake and the John Muir Trail, both of which lie 25 miles from the nearest highway.

Plan on backpacking in along the John Muir Trail if you plan on fishing the streams and lake in Evolution Valley, as it is a multi-day trip on foot. Drive east from Fresno through Kaiser Pass until you reach the Florence Lake trailhead. Keep in mind that the pass can still be blocked by snow even in the early summer. Take the ferry across Florence Lake when you get there to save your feet and legs 4 miles of hiking.

It’s 16 miles from the south end of Florence Lake to Evolution Valley, so plan for a two day trip. Feel free to stop at other lakes and streams along the way, including Piute Creek. When you arrive at the south end of the valley itself, try your luck at Evolution Creek for golden trout, or head further up the valley to Evolution Lake and Sapphire Lake to see if the fish are active. All in all, Evolution Valley and the hike to reach it offers some amazing backcountry wild trout fishing.

Flowing through the northern end of Kings Canyon National Park, the San Joaquin River’s South Fork offers amazing freestone river fishing for 11 miles. Most anglers start at the Florence Lake Trailhead (see above for how to reach it), and then backpack to the river itself.

If you stick to the lower reaches of the river you might avoid an overnight trip, but like most fisheries in the west you are more likely to get better results the further you are willing to travel off the beaten path.

The San Joaquin South Fork is about a 7-8 mile hike from the Florence Lake ferry, and it runs near continuously all the way to the mouth of Goddard Canyon 10 miles away.

This is wild trout water, and while the fish may not be as big as the river monsters found elsewhere, they are feisty. Look for decent sized rainbows, browns, and cutthroats here.

At the foot of Mt. Clarence King nestled in the hanging valley are the waters of Lake 10315. The hike to reach this lake is intense, and often requires multiple days to backpack in and then out again. It’s also one of the best fisheries in the whole park, and you can catch some of the largest trout in Fresno County here.

The closest access to the trail is from Road’s End in Cedar Grove, and reaching Lake 10315 usually takes 5-6 days of backpacking under the best of conditions.

Follow Woods Creek from the John Muir Trail until you reach the Rae Lakes. From here, it is a rocky climb of 5,000 feet to reach this nearly hidden lake. If you can make the trip though, the fishing is well worth the effort.

If you plan to fish Kings Canyon National Park, the peak hatch season is usually from mid June until late August. There is a fairly significant February hatch of BWOs each year, though once weather warms up and runoff begins fishing conditions deteriorate rapidly.

Post runoff hatches start in March with March Browns, and even some larger caddis populations. Peak summer hatches are mostly golden stoneflies and large salmon flies. Fall brings a spotted caddis hatch to close out the final months of the year before winter snow and ice start to set in around November.

Be aware that visiting in the summer is peak tourist season at nearby Yosemite and Sequoia National Parks, so traffic in and around much of Kings Canyon National Park can get crowded, especially along the one and two lane roads that are common in more remote parts of the park.

You also need to make sure if you plan to backpack in or camp out in the park that you secure a permit for the duration of your visit from the visitors center in Cedar Grove. Spots fill up fast during the warm summer months, so do your best to get that permit as soon as the park will allow it.

Most anglers prefer a 9 foot rod with a 5-weight line, 9 foot leader, and a 5X tippet. The fish aren’t necessarily large in Kings Canyon National Park, but the fish populations tend to be prodigious.

Felt sole hip waders are a must for fishing the rivers and streams, and you may want a float tube for the lakes (provided of course you don’t mind hauling it in).

Bug spray and sunscreen are a must for clear weather, as the high altitude temperatures tend to feel cooler, but still leave you exposed to active bug populations and higher UV exposure.

Be sure to check the Sequoia National Park website for the latest fishing regulations.

The closest flights from across the US all connect to the Fresno/Yosemite International Airport, and scoring a cheap flight is usually just a matter of looking and booking at just the right time.

From the airport, it's roughly an hour drive to get to the Kings Canyon National Park western entrance. On the way there following Highway 180 East you will pass through several towns, cities, and municipalities where you can find lodging.

Hotels, motels, bed and breakfasts, ranches, RV parks, and many other options are available at reasonable rates depending on your taste and budget as well as what time of year you book your trip.

Be sure to book early if you are planning a spring or summer visit though, as accommodations fill up fast during summer tourist season, and the city of Selma plays hosts to visitors heading north and east to see Yosemite, Kings Canyon, and Sequoia National Parks. It also never hurts to check local listings for vacation rentals, as they sometimes offer off season bargains for anglers seeking a deal on their stay.

Last but not least, if you are looking to backpack in to the wilderness of Kings Canyon National Park, definitely look into booking a campground at one of the trail heads or staging areas. There are several campgrounds and other accommodations deep in the park that you can reserve and use as your base camp for day hike excursions and fly fishing trips.