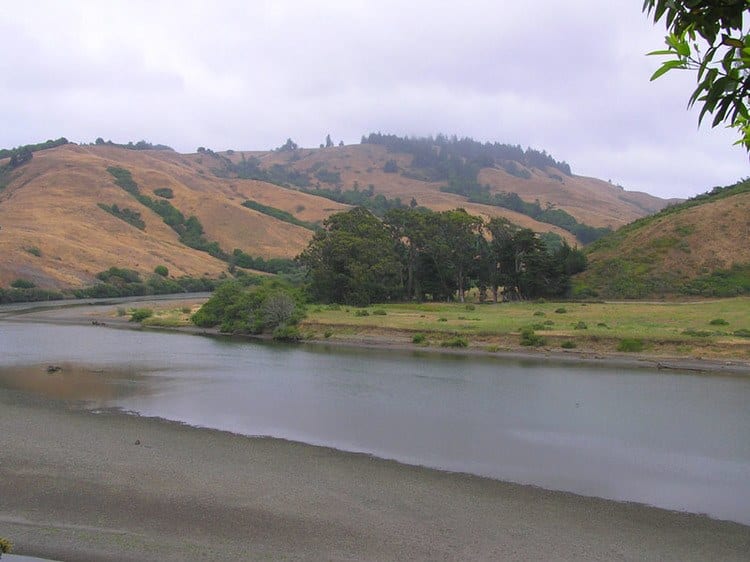 The Russian River was once a popular destination for fly fishermen, because of its impressive steelhead population. Sadly, the River has faced problems throughout the years, owing to flooding and chemical spills.

Fortunately, the River still has value as a fishery, due in large part to the activists, anglers, and nature enthusiasts dedicated to restoring and enjoying this beautiful stream.

As long as there are fish to be caught, you can be sure that there are anglers ready and willing to tackle this stream. If you are a daring angler always looking for a challenge, don’t worry, we’ve got you covered.

Be sure to check out our guide so you can learn exactly what makes the fish of the Russian River tick.

The Russian River is the second largest river in California, with a mainstem about 110 miles long. The River was originally known as Ashokawna and Bidapte, meaning “water of the east” and “big river” respectively by local Native American tribes. However, it gets its current name from Ivan Kuskov, a Russian explorer who visited the River in the early 19th century. Throughout history, the River has been known by many names, including Misallaako, Rio Ruso, Shabaikai, and Slavyanka.

The River begins at the Laughlin Range in Mendocino County. It then flows south through Redwood Valley, eventually joining the East Fork Russian River below Lake Mendocino. From there, the River continues flowing south through the Sanel Valley, before joining Big Sulphur Creek in Alexander Valley. East of Healdsburg, Maacama Creek joins the Russian, which makes a series of bends before turning west. The River passes Rio Nido and Guerneville and eventually flows into the Pacific Ocean. The River’s estuary is protected by the California Bays and Estuaries Policy.

The lower part of The Russian River is a popular destination for outdoor enthusiasts and boaters. The most popular time to visit the River is in the spring and summer, and for good reason: in the winter, the waters are much more dangerous, with swift currents and muddy waters making for treacherous conditions.

In the nineteenth century, the River was well-regarded as a fishery, with an explorer even documented that the waters contained sturgeon. While you are not likely to catch sturgeon anymore, you can still find steelhead, smallmouth bass, and shad.

Because of the River’s close proximity to Napa Valley, you can enjoy steelhead fishing during the day and be relaxing with a glass of wine by sundown.

Access to the Russian River is limited, due to private property along the river. There are a few public access points along the River (see map). The River is paralleled in some sections by State Route 116. The lower parts of the River are most popular among visitors.

Much of the River is accessible to wade fisherman, but this approach can be limited in some areas. Many anglers tackle this River by canoe or drift boat, which is the best approach for reaches of the river with limited wade access.

The best time to catch steelhead is typically in January and February, although this largely depends on how much rainfall the area has seen in the preceding months.

In May and June you will see the shad, which respond well to brightly colored flies on sink tip lines .

In the warmer summer months, smallmouth bass are active and can be caught with nymphs and streamers. The smallies can run four to five pounds and are a lot of fun to catch.

A single-handed 9-foot six- to 8-weight rod with either a sink tip or shooting head. For two-handed rods, a Scandi tip on a floating line is recommended for swinging flies on the Russian River.

Area fly shops, guides and websites that can provide a Russian River fly fishing report are listed below:

The nearest airport to the Russian River in California is the Charles M. Schulz – Sonoma County Airport, while the closest international airport is the Oakland International Airport.

You can also enjoy the River’s proximity to Napa Valley by including a wine tasting or shopping trip in your travel plans. You can visit the Napa Valley website to check out other attractions in the area.

The Russian River RV Campground is situated on the banks of the River, and also located minutes away from local wineries. Vineyard Valley Inn is a great option if you are looking for indoor accommodations. They offer cozy spaces with mini fridges and permit pets in the rooms.

The Russian River has greatly improved through the efforts of dedicated wildlife lovers. Enjoy the fruits of their labor – and maybe some wine too – by visiting the Russian River.

DIY Guide to Fly Fishing the Mokelumne River in California