In the western hills of rural Virginia lies the Shenandoah Valley and the serene Shenandoah National Park.

Few places in the continental United States can compare to the beauty of Shenandoah, and few fisheries offer such large and generous catches for anglers as the streams and rivers of Shenandoah National Park.

The park itself is east of Interstate 81 between Staunton and Harrisonburg, covering over 300 square miles of mountains, forest land, and freestone mountain streams.

Anglers flock to Shenandoah’s many fisheries each year in search of their large brook trout population, but there are more than a few rainbows and browns to be had in quantity depending on where you go in the park.

The park's Fisheries Management Plan has two objectives: to preserve and perpetuate native brook trout as a key component of the park's aquatic ecosystems; and to allow for recreational fishing on those park streams that consistently produce adequate numbers of brook trout for maintaining population stability

Fishing season is year round for trout, though certain areas of the park may be inaccessible following heavy snowfall.

The fish aren’t the only reason to visit Shenandoah though: the Skyline Drive through the Blue Mountains, Grand Caverns in the town of Grottoes, Mount Sydney and Mount Crawford are all well worth the visit if only for the view.

The park attracts thousands of tourists and outdoor adventurers throughout the year, but Shenandoah National Park is large enough it ’s never too difficult to find a quiet spot to fish if you are willing to drive around or hike a bit to find a quiet fishing spot all to yourself.

In terms of must-visit fisheries in the eastern United States, Shenandoah definitely ranks in the top places for wild brook trout. You’d be hard pressed to find more beautiful country to see on a fishing trip, too. 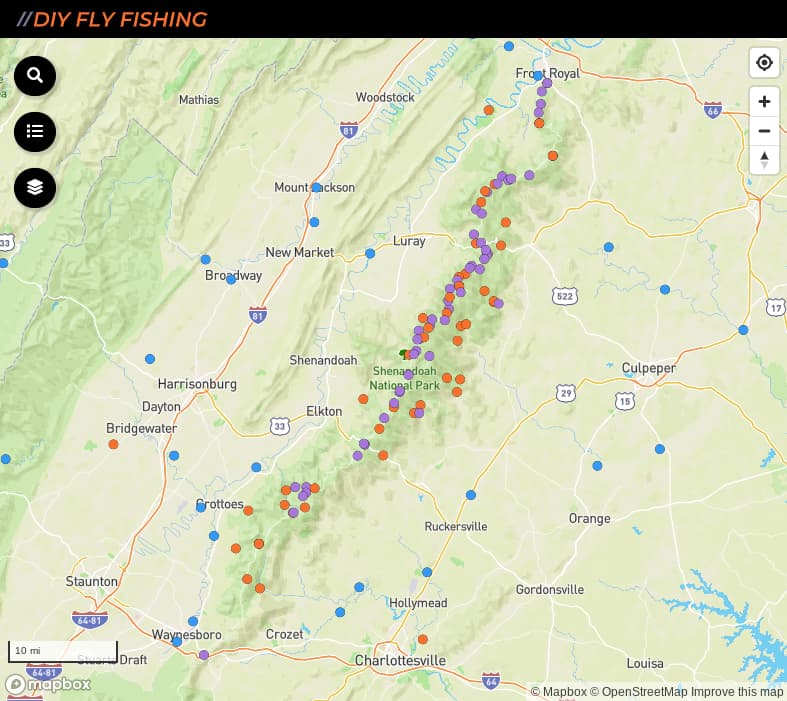 Here’s a rundown of the top fisheries in Shenandoah every angler needs to visit when fly fishing in the mid-Atlantic region of the US.

Small-stream anglers in the know are familiar with this headwater fishery in the mountains of Shenandoah National Park. The Rapidan River runs through the Hoover wilderness here, and has some of the best hatches in the entire park.

The area takes its name from President Herbert Hoover, the man credited with its discovery and responsible for establishing the presidential retreat called Rapidan Camp. The camp is located where Mill Prong and Laurel Prong combine to form the Rapidan River.

It’s only 75 miles from Washington DC, and provides ideal fishing conditions for brook and brown trout. The state has done a fantastic job of keeping this fishery wild, and few anglers pay Hoover’s Wilderness a visit even during peak season.

The Rapidan is accessible from the Skyline Drive parking areas with a short hike along well marked trails, and from the lower park boundary with a few miles of uphill hiking to reach the river. Anglers willing to fight the weekend traffic during peak tourism season are likely to be rewarded with many brookies that haven’t seen a hook and line all year.

Brookies on the Rapidan by Stephan Jutz

Possibly the best fishery in the entire park, Big Run can be accessed via clearly marked trails off of Skyline Drive. Park at Doyle’s River trailhead east of the Skyline near mile marker 81.

You can also take the Big Run Loop Trail from the Big Run Overlook to the Big Run Portal Trail a couple miles down from the Overlook. You will want to make your way down to Rocky Mountain Run for the best fishing.

Alternatively, you can get to Big Run from the Brown Mountain Overlook at mile marker 77 on the Skyline. From here, it’s less than a mile to Rocky Mountain Run Trail, and less than three miles to Big Run itself.

Some sections of the stream are catch and release only, so be sure to bring a detailed map of the area and check it carefully before taking any fish from the water.

Possibly the most beautiful fishery in the entire park, Pocosin River can best be reached from the Pocosin Cabin parking area between mile marker 59 and 60 off the Skyline Drive.

You will need to hike the Pocosin Fire Road to Pocosin Hollow Trail. Make a left here, and you will be at the stream itself.

If you prefer to approach from the bottom of the mountain here, just take Route 667 from 230 through the town of Kinderhook.

You can park in the wide grassy area where the Pocosin River meets the Conway, though you need to hike until you reach the park before you start fishing to ensure you are on public land.

This stream is peppered with waterfalls and classic all-American vistas that are a balm for the soul even if you don’t catch a single fish. No worries about landing a catch though, as this stream is packed with trout and easy to reach from Limberlost east of Skyline drive by mile marker 43.

Take the Old Rag Fire Road to the White Oak Canyon Trail, then make a right to reach the stream access near the bottom of the mountain.

The lower reach is best accessed from Route 600 west of Syria. Park close to the stream here and follow the White Oak Canyon Trail.

The best season for trout fly fishing is definitely between March and May. The hatches for the area are richest during this time of year pretty much everywhere in the park, but most especially on the smaller, out-of-the-way streams.

Earlier in the season is best since the Quill Gordon and Dark Blue Quill mayflies hatch in massive numbers this time of year. Make sure the water temperature at your favorite fishing spot holds highs of 40 degrees for at least a few days in a row to ensure the brook trout are jumping at the mayfly hatches.

Keep in mind that the larger the watershed, the longer it takes to warm up sufficiently in the springtime.

The next big hatch you don’t want to miss is April to July for the Little Yellow Stoneflies population boom. The water is well up to temperature for active brook, brown, and rainbows, and are all in the throes of the summer feeding frenzy.

The fall and winter may offer some minor midge hatches, but fishing in Shenandoah in the cold doesn’t yield results even close to fishing in the spring and summer when the big hatches are in full swing.

In the spring between March and April, you will want to have some Mr. Rapidan or Quill Gordon in #16, as well as some #16 Blue Quill.

April to May, the hatch shifts a bit, and March Brown #14 and Mr. Rapidan #14 will be the flies of choice.

May also brings the Grey Fox and Ginger Quill in #14, but these are not nearly as massive as the March Brown hatches.

June and July, terrestrials become the order of the day, and hopper and ant patterns keep the trout biting.

The best all around fly for peak season though are Little Yellow Stonefly patterns. A #16 Sulphur imitation will usually also do the trick. These fish well all season long.

A 9-foot 3- or 4-wt fly rod with floating line is perfect for fishing dry flies and small nymphs on the larger streams in the Park.  For the smaller, bushy streams you'll want a smaller rod, 6-1/2 to 7-1/2 feet long. A tapered 9-foot leader, with tippet size 3X to 5X to match the flies you are throwing, is pretty standard.

There are only a few area fly shops and blogs that I know of that publish Shenandoah National Park fishing reports. A few to check out are listed below.

Consult the Shenandoah National Park fishing regulations for the latest information and list of fisheries designated as catch-and-release or open for harvest.

The two closest airports to Shenandoah are the Shenandoah Valley Regional Airport and the Charlottesville Albemarle Airport, both of which within a 30 minute drive of the park itself. Alternatively, you could fly into Washington DC at Dulles if you don’t mind the 1-2 hour drive from the city.

Regarding accommodations, there are many traditional motels and hotels in Staunton and Bridgewater, and Charlottesville and Harrisonburg both offer high end and budget accommodations to suit any taste and wallet.

Campsites maintained by the National Park Service are available within the park, and there are many RV parks and campgrounds available for rent nearby.

Looking for more places to fish? Visit our DIY Guide to the Best Fly Fishing in Virginia.