The Lehigh River was featured in Eastern Fly Fishing (Volume 7, Number 6, November/December 2011) in an article by Beau Beasley aptly named, "Lehigh River, PA - Understanding an Underated Fishery". And underated it is.

The Lehigh River flows for over 100 miles through Pennsylvania and serves as the largest tributary to the Delaware River.

Trout fishing on the Lehigh River consist of 20 miles of small, easy-to-wade water flowing through a series of glacial bogs and marshes surrounded by scenic state forest near Goulsboro, Pennsylvania, and a 35 mile stretch below the Francis E. Walter Dam from Whitehaven to Walnutport. 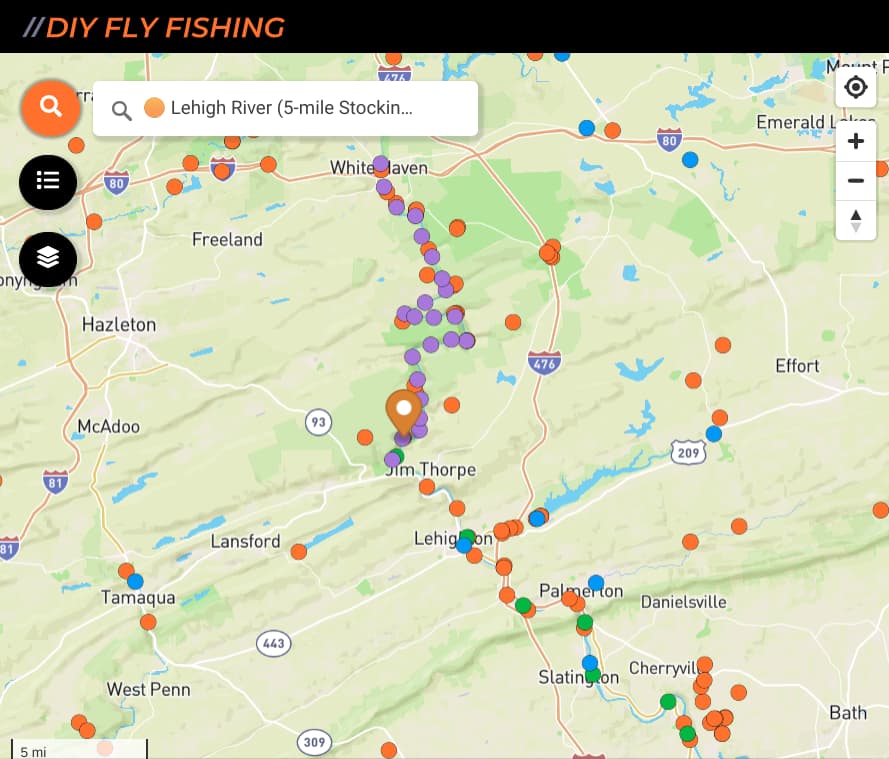 The dam, built in 1961 by the U.S. Army Corps of Engineers, is managed primarily for flood control and whitewater rafting and as a result the lower Lehigh River see significant fluctuations in temperature and depth. Both take a toll on the wild trout and aquatic insect population.

Despite this, the river contains a robust population of wild browns and rainbows, that is augmented by a number of private organizations that stock the river, most notably the Lehigh River Stocking Association. In addition to trout, the Lehigh River also contains a healthy population of smallmouth bass that fight like hell and are a blast to catch.

The Lehigh River is a formidable river filled with slick bowling ball sized boulders and is treacherous to wade in some locations and darn near impossible to wade in others. Caution is advised. With that in mind, there are ample locations along the river from Whitehaven to Walnutport that provide access to the wade fisherman.

The Lehigh Coldwater Fishery Alliance put together a nice map detailing the location of wade access points and fishing tips for each location that is incorporated into the map above.

The Lehigh River is well known for whitewater rafting through the Lehigh Gorge but there are also a number of excellent float trips that are well suited to fishing, in particular from Jim Thorpe to Walnutport.

The Wildlands Conservancy has put together an excellent guide to floating the Lehigh River called the Lehigh River Water Trail that details boat ramp locations, river reach maps and detailed descriptions of major rapids (these are particularly handy when us fisherman are trying to avoid them).

This information is included in the map above. Click on the map icons for more information and river mileage to the next boat ramp for planning float trips.

There are three USGS stream gauges on the Lehigh River from the Francis E. Walter Dam downstream to Walnutport, the river reach of most interest to trout fisherman. As you can see in the graphs below, the river picks up volume from a number of tributaries along the way. USGS stream gauges are marked with a dark green icon on the map above.

The Lehigh fishes best at 200 to 300 cfs up near the dam and up to 750 cfs as you head downstream toward Lehighton and Walnutport. 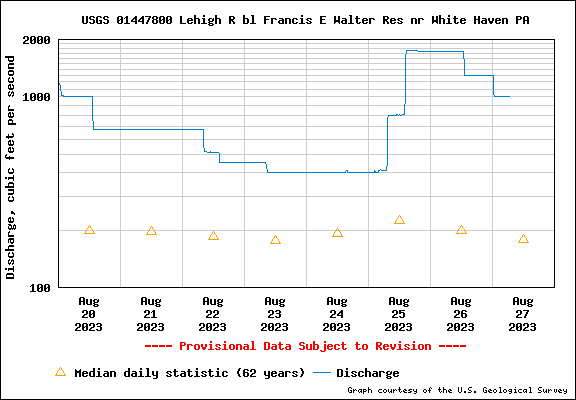 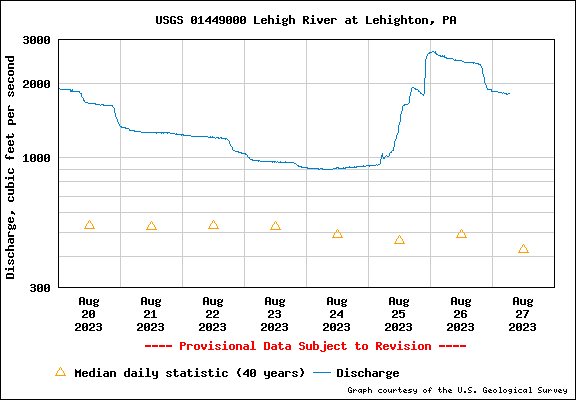 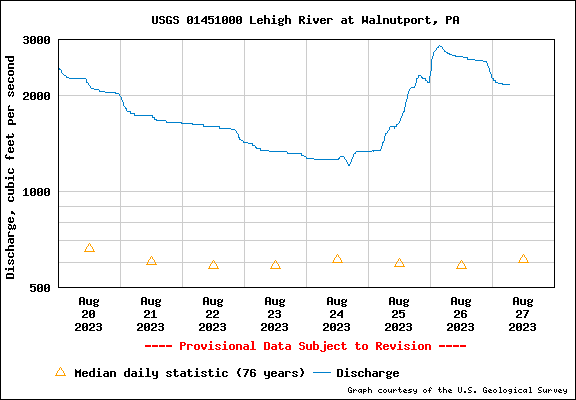 As noted above, flows on the Lehigh River below White Haven are controlled by the Francis E. Walter Dam. White water releases typically put the fishing off and these days are best avoided. If you do fish, go early before the wave of water and boaters arrives. If you study the USGS stream gauge data (see above) during a white water release you will be able to predicted when water levels will start to increase in the location you wish to fish.

Below are excerpts of the U.S. Army Corps of Engineers Francis E. Water Reservoir Recreation Operations Plan. You can read the full plan here.

The plan, developed in partnership with Pennsylvania Fish and Boat Commission, and the Department of Conservation and Natural Resources, lists dates and release amounts for whitewater and fisheries releases for the recreation seasons. Water will again be allocated to ensure whitewater releases from July to late August and fisheries releases from July to early September. Seasonal precipitation and water accumulation will be used for releases later in the season (late August through mid-October).
The Army Corps typically will conduct a total of 22 fishing releases and 24 whitewater release dates (four of which are dependent on additional precipitation along with fisheries enhancement releases on all other days during the recreation season). All dates are dependent on hydrologic conditions and the absence of the need for flood control operations.

The 2021 whitewater release schedule includes 24 dates (4 of which are dependent on sufficient water storage and not including final October weekend).

** The October weekend release is intended to provide a means of releasing any excess water that may have accumulated during the recreation season.

This is the last added increment for the recreation plan. Fisheries releases through the season will be assured before the final weekend (9-10 October) release will be considered. This release is intended to release all excess water.

Note: You want to avoid fishing on Whitewater Release Days!

* Release will be set to match inflow with a target release up to 400 cfs. Inflow will not be augmented by use of storage to satisfy the 400 cfs target.

It is also important to note that once the water level in the reservoir reaches the target pool height for the recreation season, water is released to match outflow with inflow. So if there is a large rainfall event double check the stream gauges before you head out even if there is not a whitewater release planned.

The Lehigh Coldwater Fishery Alliance put together a handy flow and wade chart for the Lehigh River. Use the USGS flow gauge data and wade chart to determine when it is safe to wade or float the river. Heed the warnings in the chart. The Mighty Lehigh is extremely dangerous at high flows! 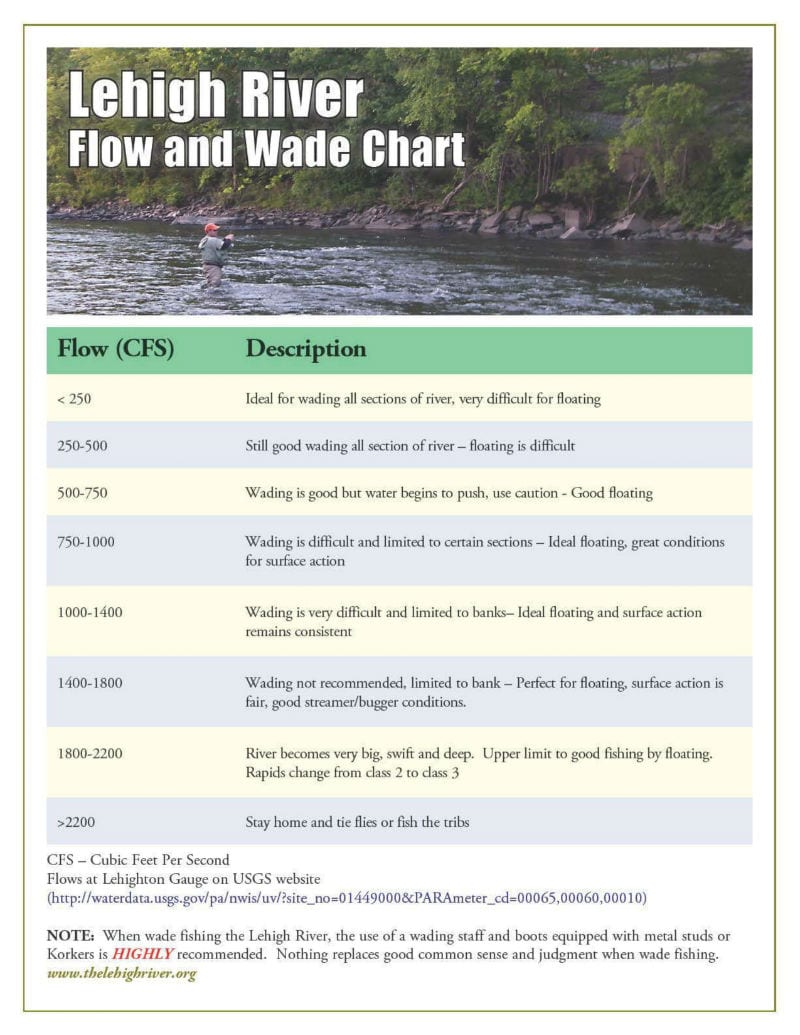 The Lehigh supports an impressive variety of mayflies, caddisflies and stoneflies.

Little Black Stoneflies begin in early-April and can hatch in tremendous numbers. The end of April will see Little Black Caddis, Grannoms and Hendricksons, along with a number of Caddis species.

May and June are "Prime Time" on the Lehigh and the March Brown, Grey Fox, Sulphur and Caddis hatches can be phenomenol. Hatches of Blue Wing Olives, Light Cahills and Isonychias begin in earnst in June.

As summer begins, Caddis still hatch in good numbers along with small Blue Wing Olives, Isonychias and summer Stenonemas (Sulphurs). Mornings can produce good hatches of Tricos in the Lehighton to Bowmanstown stretch.

Come fall Isonychias and evening hatches of Sulphurs can be outstanding. Caddis and Blue Wing Olives will be the flies the fish will key on as late fall approaches. Fishing with streamers and Wooly Buggers can be quite productive during this time of year as well. In fact, Wooly Buggers and streamers fished with a sinking line will produce fish all year long.

The LRSA has published one of the better hatch charts for the Lehigh River (reproduced below). 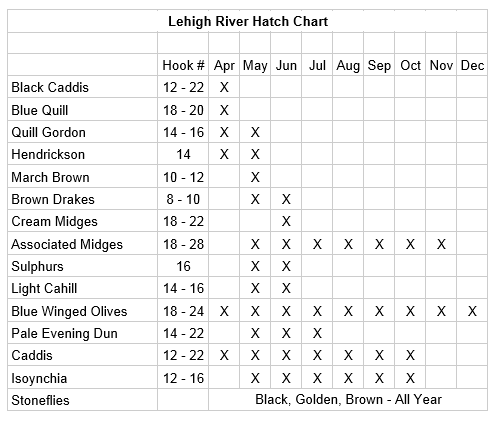 If you haven't fished the Lehigh River give it a chance the next time you are in the area - you just might be surprised at how well it fishes.

DIY Guide to Fly Fishing the Allegheny River in Pennsylvania