Named as one of Pennsylvania’s 25 Must See State Parks by the Pennsylvania Department of Conservation and Natural Resources, Hickory Run State Park is sure to leave an impression.

Hickory Run is teeming with wild brown and brook trout. The stream is well-protected from the sun by an overhead canopy of trees, so you’ll stay cool even if you are fishing during the hottest summer months.

So pack your waders and rods! Paradise awaits.

Hickory Run is a small tributary of the Lehigh River flows for about five miles through Hickory State Park. Located in the Pocono Mountains in Pennsylvania, Hickory Run has long been a favorite spot for anglers.

Hickory Run is a PA Class A wild trout stream with a first-rate brook and brown trout population. The stream has a catch and release section that is about 1.6 miles long and consists of mostly riffles and runs, with some smaller pools.

The upper part of the creek is very tightly enclosed, so you might have some trouble making casts there. But the lower section of Hickory Run is about 25 feet in width, so there is plenty of room to spread out. Pennsylvania Route 534 crosses the stream above the Catch and Release section.

Hickory Run State Park also offers plenty of activities outside of fly fishing, including ice skating, seasonal hunting, and hiking. Hawk Falls is another popular site, along with the boulder field, which is the largest boulder field in the Appalachian region.

With easy access and plenty of trout to catch, Hickory Run State Park is almost a required entry on any fly fisherman’s bucket list. 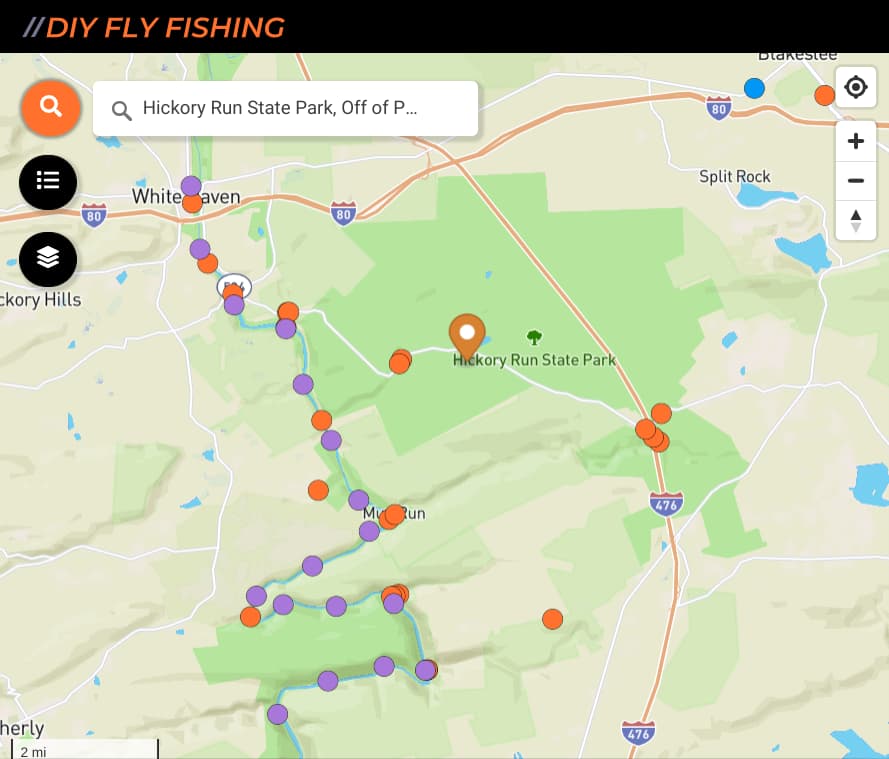 Gaining access to Hickory Run is a breeze, as the park has many clearly marked signs and parking areas. From I-80, take Exit 274 at the Hickory Run State Park Exit, and then drive east on PA 534 for six miles.

There's a trail that follows the stream from Rt 534 downstream to the confluence with the Lehigh River.

There are also several other Class A trout streams in Hickory Run State Park that are worth a visit including Black Creek (aka Hayes Creek), Mud Run and Hawk Run (see map).

While the overhead canopy of trees is sure to keep you cool in the summer, fly fishing can be challenging during this time. The water level lowers, and is extra clear during this season, so the trout have more time to inspect your imitations. But a good presentation can solve any problem!

Dry fly fishing at Hickory Run is excellent in the spring and fall. You’ll also have luck if you use terrestrial imitations in the summer.

Regarding fly patterns, here is a list of some of the best flies for Hickory Run:

A 9-foot 4-wt fly rod with floating line is perfect for fishing dry flies and small nymphs on Hickory Run.  A tapered 9-foot leader, with tippet size 4X to 6X to match the flies you are throwing, is pretty standard.

Pennsylvania requires all anglers 16 and older to have a standard fishing license, and a special permit for trout fishing, which can be obtained online or in most sporting goods stores in the state.

You can’t beat camping at Hickory Run State Park. You’ll get the best rates if you decide to visit offseason. However, if you would rather sleep with a roof over your head, The Econo Lodge & Suites offers reasonable rates and free breakfast. The Country Place Inn and Suites is another good option, with close proximity to the park and free WiFi.

Discover your new favorite fishing spot. But remember, you heard it here first!

Looking for more places to fish? Visit our DIY Guide to the Best Fly Fishing in Pennsylvania.

DIY Guide to Fly Fishing the Allegheny River in Pennsylvania