As one of the premier fly fishing destinations in the world, the Crater Lake National Park region in Oregon offers some of the finest trout streams and lakes in the lower forty-eight states.

The park takes its name from the massive crater of Mount Mazama, an active 12,000-foot volcano that erupted approximately 8,000 years ago. After the violence of the eruption, most of the magma within the volcano was expelled, and the mountain itself collapsed into a massive crater-shaped sinkhole known as a caldera.

Today, the Mazama caldera is half filled with water and is known as Crater Lake. Within the nearly 2,000 foot depths (the 8th deepest lake in the world), there are a plethora of non-native rainbow trout and Kokanee salmon that grow fat and lazy due to the lack of any natural predators in their environment.

None of the species of fish are native to the lake, and are actually considered an invasive species of the lake’s ecosystem. For this reason, fishing is not only allowed at Crater Lake National Park, but strongly encouraged.

Crater Lake National Park is something of an anglers' paradise, and not just for the no limit fishing at Crater Lake or the artificial flies and lures only rule.

Subsequent stocking of the local rivers and streams near Crater Lake during the 20th century has resulted in a mass population boom of trout in the surrounding area, so be prepared to hit the trails and follow some rivers and streams in search of those trophy browns, rainbows, and cutthroats.

Fly fishing enthusiasts interested in salmon can also try their luck at landing big Kokanee (Sockeye) salmon that swim the waters of the other rivers and streams above and below the crater.

There is a lot to love about Crater Lake National Park: the natural beauty, the snow capped mountain peaks, and the crystal clear blue waters reflecting the clear skies above. It’s a little slice of heaven on earth, and a truly excellent fly fishing destination for anglers of every taste and skill level. 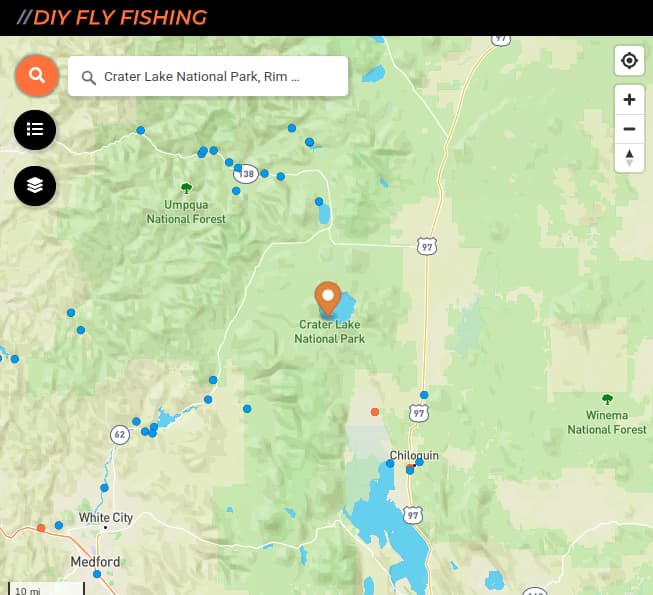 There are few places where you can just pick a body of water and try your luck, but Crater Lake National Park is one of them. Here’s the top fishing spots near the park to try your luck.

If fishing the deepest lake in the U.S. is on your bucket list, then fishing Crater Lake is a must.  Rainbow trout and Kokanee Salmon cruise the shoreline of this 1,900-foot deep cauldron and are easy to catch in the spring.

Access to the Crater Lake, however, is a bit challenging.  The only way in and out is a strenuous hike down the Cleatwood Cove Trail, a 2.2-mile round trip.

A quarter-mile of rocky shore line awaits at the trails' end where you can cast for cruising trout and salmon.  Unfortunately, wading and floating the lake is not allowed.

If you'd like to explore more of the Lake head for Wizard Island.  The park runs daily boat tours from Cleatwood Cove out to the island.  Tours run in the morning and return in the afternoon.  Reservations are required.

A little north of Crater Lake, Diamond Lake boasts a massive population of rainbow trout, some of which get big and fat on the local fly populations The insect population here provides hatches of the first order, though it also spawns its fair share of mosquitoes.

In recent years the fly population was largely devoured by invasive tui chub baitfish, but these have since been eradicated thanks to the efforts of the Oregon Department of Fish and Wildlife.

For this reason, bait fishing is expressly forbidden on Diamond Lake, making it an ideal location for fly fishing. To get there, you are looking at about an hour and a half drive from Klamath Falls, which makes it roughly two hours from the cities of Bend and Eugene, Oregon.

Something of a legend among fly fisherman, the North Umpqua River runs north and west of Crater Lake National Park. World-class steelhead fishing is available here.

Rainbow trout and cutthroat trout are also plentiful here, and in the spring fly fisherman can even try their luck at landing some Chinook and Coho salmon that roam these waters.

To access the river, just follow the North Umpqua Highway West from Crater Lake, and stop at a pull-off or parking area that seems convenient.

Bisected by the Lost Creek Reservoir Dam, this river is stocked annually with hatchery-raised rainbows that are suitable for keeping and eating. This stretch of water is also a great place to teach friends or family the art of fly fishing with a relative guarantee of successfully landing a trout.

The best place to land some big rainbows is below the dam along the Rogue. The hatchery raised trout have a tendency to strike at just about anything. Access to the Rogue River and riverside trails is possible all along Highway 62 headed west and south from Crater Lake.

Near the Newberry Crater east of La Pine are two volcano crater lakes that are flush with rainbows, browns, and kokanee salmon.

Water temperatures are low due to the elevation, and a smart angler can easily catch large trophy trout in the lake with little effort. If you decide to try East Lake, you may even have a chance to land and Atlantic salmon or two.

The lakes of Newberry Crater are easily two of the best fishing bodies of water in Crater Lake National Park. Head south of Bend on Highway 97, then take Highway 21 East to reach the Newberry Crater.

If you’re looking for a fight with some wily wild trout, the Deschutes and Fall Rivers are the place to go. Wild red band rainbow trout are some of the scrappiest fish near the park, and there are some large brown trout ripe for the taking if the red bands prove too much for you.

To get to the Deschutes by Crane Prairie Reservoir, head west of Sunriver on Conklin, then keep following NF-40 west til you reach the reservoir. From here, head north on the Highway 46 until you see the Deschutes River on your right.

The caddis hatches in the summer make it the best possible time to visit Crater Lake National Park and its many fisheries.

Stoneflies in May and egg patterns in the spring also offer great opportunities for landing some hungry trout.

Late summer at Crater Lake National Park brings the BWOs and PMDs, and if you can access the park despite the snowfall in the winter time you will find the wintering trout are hungry for midges.

Bear in mind when you plan your trip that Crater Lake is a popular tourist destination season year round, so be sure to book early if you want to stay at the campgrounds or RV parks that are scattered throughout the park.

Typically, May is a good season to visit since it is just after runoff and thaw, but before most people are ready to venture out into the park for fishing, boating, or camping.

Due to the elevation it might be a bit chilly, but you stand a better chance of not fighting traffic and crowds visiting earlier as opposed to later in the warm seasons of the year.

Experts recommend packing a 9 or a 10-foot fly rod for fishing in and around Crater Lake National Park. You'll want at least a 5-weight, if not a 6-weight rod. A 9-foot rod is best for the faster action on the rivers, and a 10-foot rod is better for lake shore fly fishing.

Pack good quality waders as well even if you plan to visit in the summer, as the high elevation of most of the lakes and streams can make for some cold water conditions well into the summer months. Additionally, makes sure your waders have felt soles to better preserve the streams and river beds.

Another concern you need to be aware of is the massive mosquito population in the spring. As fantastic a breeding ground as Crater Lake National Park is for flies, it also produces a prodigious amount of mosquitoes. Be sure you’ve got some powerful bug spray to keep the pests from biting while you are fishing, as they can swarm pretty thick in places.

Here are some recommended flies that have proven effective for fishing in the Crater Lake National Park region:

Special regulations that apply to fishing in and near Crater Lake National Park include:

The cities of Bend and Eugene Oregon are on the eastern and western borders of the park. Flights are into Medford (75 miles from the park) or Portland (250 miles away).

If you fly into Medford, you are only an hours drive from the airport to the park (ideal for campers), and if you decide to stay in Eugene or Bend, you are roughly an hour and a half from the center of the park, and about an 45--60 minutes from most of the popular rivers and streams.

As far as accommodations are concerned, there is the Sunriver Resort in the park itself, and both Eugene and Bend have many traditional accommodations that are guaranteed to suit any budget and taste.

Additionally, there are many local places to rent RVs and RV sharing services, allowing you to fly in, rent your accommodations for your stay, and drive them right into the park.

Within the park you will find several RV park locations (complete with utility hookups) within a short hiking distance or biking distance of many of the popular rivers, streams, and reservoirs.

Another great way to save money on a stay is to browse local vacation rentals in and around the Eugene and Bend areas. Sometimes local renters offer some great deals on stays during certain times of year.