North Cascades National Park and Recreation Complex is a vast swath of old growth forest and mountain waterways. Covering half a million acres of Washington state, North Cascades is the ultimate combination package for anglers and sportsman alike.

Even the names of the peaks in the area are dramatic: Mount Terror, Mount Challenger, Mount Fury, Desolation Peak, Mount Despair, and even Phantom Peak. The mountain ranges in the area are often referred to as the American Alps, as they are snow covered year round.

An aerial tour of the North Cascades National Park in the Washington, USA

The North Cascades region is home to mass populations of game fish: there are large rainbow trout, cutthroat trout, lake trout, steelhead, char and five different species of salmon that cruise the rivers, streams, and lakes.

Over the years since the park was incorporated in 1968 by President Lyndon Baines Johnson, it has becomes something of a legendary fishery among bait and fly fisherman alike. An angler could spend a lifetime fishing all the tributaries, streams, and lakes.

Access to the park itself is fairly easy year round, though there are closed sections during runoff and in winter. Given its proximity to Seattle and Everett Washington, making multiple trips to the various sections of the park is also easy.

North Cascades National Park and Recreation Area is a sportsman’s paradise, and this makes it a great place for families to fly fish together or each go their separate ways for the day hiking, swimming, biking or boating.

Summer in the region may be peak tourist season, but the roads are well maintained and even peak season traffic isn’t intolerable. Regardless of when you plan to go, North Cascades is a must-visit location that belongs on every angler’s bucket list. 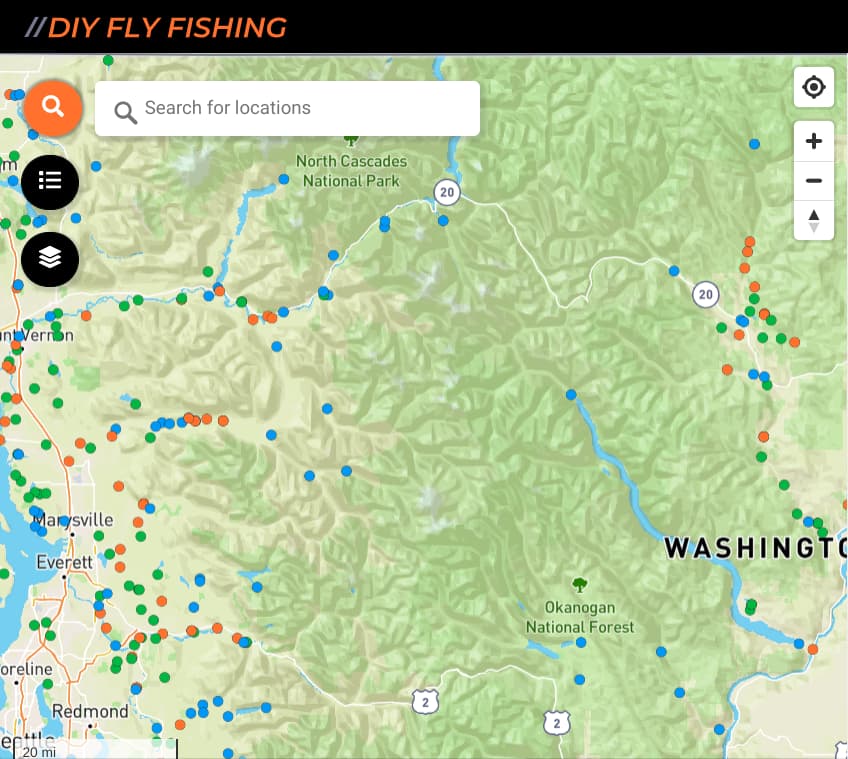 The glacier fed lakes, rivers, and streams of North Cascades make it one of the best fisheries in the Pacific Northwest. Between the large trout population, salmon and steelhead runs, and the bull and lake trout populations, you will find it difficult NOT to land some gorgeous fish while visiting the park.

To give you an edge on landing that long-sought fishing trophy, here are the best places to fly fish in North Cascades National Park:

Restoration efforts are underway on the Skagit River to improve spawning habit for Chinook salmon and wild steelhead with the hopes of returning the Skagit to it's former glory.

Flowing from North Cascades all the way to Puget Sound, the Skagit is named for the local Native American people who have lived along its banks for millennia.

The Skagit is best known for the winter steelhead runs, as well as the chum, coho, and pink salmon that fight their way upriver to their North Cascades spawning grounds.

As with many salmon run rivers, the trout follow the salmon as they swim upstream from the Pacific to lay their eggs further inland.

Cutthroat, rainbows, browns, and eastern brook trout all feed on salmon eggs during rush, and you can easily land your limit of trout during salmon runs with egg patterns.

The Skagit is accessible from multiple points along Highway 20 as you drive through the park. Like most rivers in the park, the Skagit is glacier fed and provides excellent conditions for the local trout. 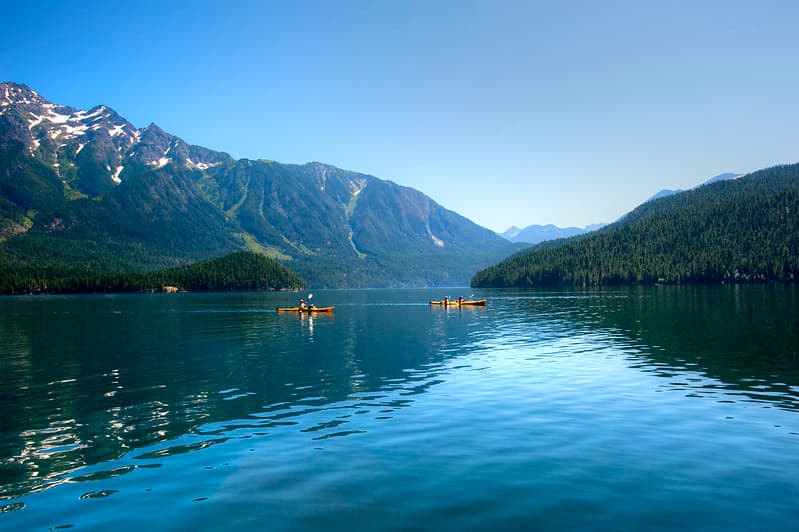 One of the longest man-made lakes in the Pacific northwest, Ross Lake was created as a reservoir for the Ross Dam in 1949.

Access to the lake is only possible via Hozomeen, and there is little in the way of large boat traffic on Ross Lake. It’s a popular spot for hikers and anglers though, and there are many trails that lead through the surrounding forest and along the lakeshore.

Kayaks and other small watercraft can easily make the trip across the water to the small islands that dot the lake, or you can take a boat in lieu of hiking the lakeshore and give your legs a rest.

Ross Lake is best for lake trout and rainbows, but if you fish up by Hozomeen or May Creek you may land some brookies or cutthroats. 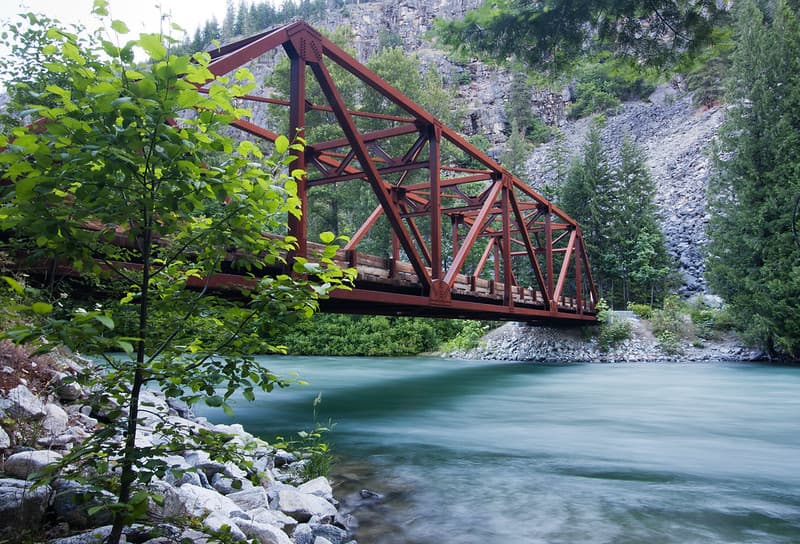 Harlequin Bridge over the Stehekin River. Photo by Andy Simonds

A glacier fed river that has frigid, oxygen-rich waters year round, the Stehekin runs all the way from the heart of North Cascades all the way down to Lake Chelan.

To get to the river, you can drive yourself along Stehekin road or hike the many riverside trails along the banks. The park also offers a shuttle bus that runs along Stehekin Road if hiking or driving aren’t your thing.

Best spots along the Stehekin are Harlequin Campground or near Buckner Hole (a short hike from the Buckner Orchard). Most anglers see larger populations of rainbows and native cutthroats on the Stehekin. 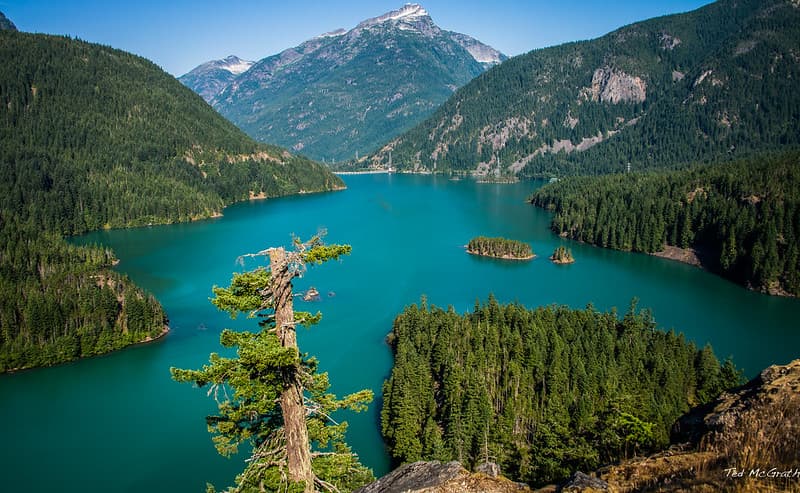 Diablo Lake in North Cascades National Park offers lakeside camping, a developed boat ramp and easy access. The emerald waters of the lake are prime habitat for rainbow trout that will readily take a dry fly. Photo by Ted McGrath

A pair of reservoir lakes formed by dams, you can reach both Diablo and Gorge Lakes via Highway 20.

The glacial runoff that feeds the lakes give both their emerald hue, and boating on the still waters is easy whether you go with motorized or self-powered watercraft.

The eastern end of Gorge Lake near the town of Diablo fishes well, as do the waters near Colonial Creek Campground.

Colonial Creek offers a boat ramp, fish cleaning station, and a fully accessible fishing deck that makes this area for family fishing trips. Rainbows and lake trout are common here, as are bullheads and the occasional Kokanee salmon.

The earliest hatches of the year in North Cascades are definitely the mayflies starting in March and running through late May. Around the beginning of April until October there are massive hatches of Longhorn Sedge caddis flies, and these are when the feeding frenzy begins for the cutthroats, rainbows, and bull trout.

Thanks to the glacier fed waters of the area, there isn’t a bad time to visit between April and October. Make sure you check the local hatch charts for aquatic insects in northern Washington when you start packing your flies to be on the safe side.

Additionally, June, July, and August are peak tourist season for families and college students who travel to North Cascades National Park and Recreation Area in droves. 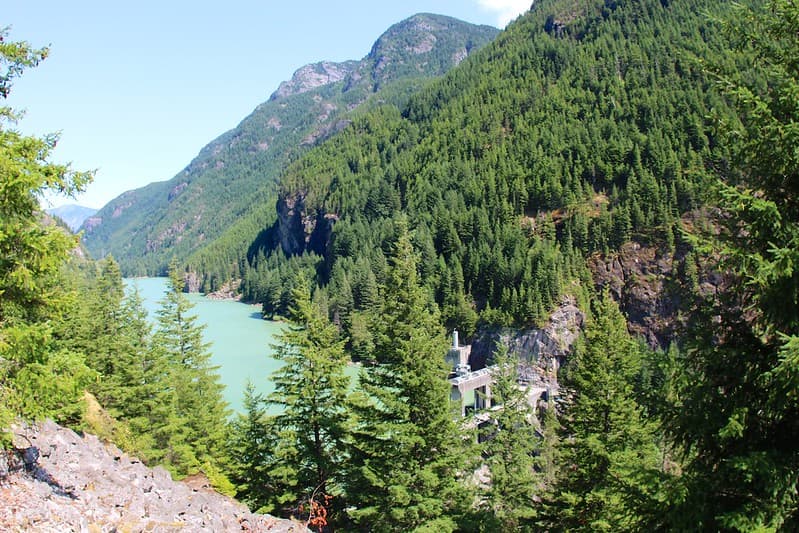 Gorge Lake in North Cascades National Park is narrow and steep-walled that more closely reassembles a river the lower reaches.  Rainbow trout and char are the main attractions for fly anglers who find success slowly trolling streamer patterns from a float tube. Photo by daveyin

Campers, hikers, rafters, kayakers, and all other manner of outdoor tourists are going to be thick as the caddis fly hatches, and you need to plan accordingly if that’s when you plan on flying or driving in.

You may find that parking near one of the lakes and then hiking up or downstream to your desired fishing destination is easier than trying to find pull-off parking along Highway 20.

If you abhor crowds, the winter offers plenty of excellent fishing as well, although you will want to stick to midges this time of year since the other hatches are largely dormant and the fish are far less hungry and active.

There is plenty of room to spread out in North Cascades, so a good 10-foot rod in a 5-6 weight line should be more than sufficient if you are there for trout.

Hip waders are a must for stream and lake shore fishing, though you may want to opt for insulated waders even in the summertime due to the glacial runoff that keeps the water icy cold all year long.

Mosquitoes can get intense in the late spring and throughout the summer, so bug spray is a must, as is some sunscreen for brighter days.

As for flies, there are many patterns most anglers find effective.

Here are some recommended flies that have proven effective for fishing in the North Cascades National Park region:

There are a number of area fly shops and guide services that can provide an update on current fishing conditions in and around North Cascades National Park. A few to check out are listed below.

Special regulations that apply to fishing in and near North Cascades National Park include:

The advantage of flying into Bellingham? It’s about 30 miles closer than Seattle, so you can cut about 30-40 minutes off your drive time to the towns just outside the park. Bellingham is also closer to the Canadian border, and it’s not too difficult to pay a quick visit to Vancouver while you are in the area (an hour and 20 minutes northwest.)

As far as accommodations are concerned, there are plenty of places to choose from if you follow the i-5 south towards Burlington and Mt. Vernon.  There are many lodges and resorts on the outskirts of both the eastern and western borders of the park, and there are plenty of campgrounds and cabins within the park itself that can be reserved for a stay.