DIY Guide to the Best Fly Fishing in New York

If you're looking for a state that is rich in fish, and offers all kinds of streams, lakes, and rivers, then maybe it's time to think about New York State. Often, what comes to mind when we think of New York is the city, of course, with all its bustling excitement, entertainment, and action. And while you can certainly find that in New York City, there is so much more to the state than just that.

New York is a mecca for fly fishing enthusiasts, thanks to the Catskills and Adirondacks. In fact, some say New York offers the best fishing east of the Rocky Mountains. That's not a bad title to be given. These areas in particular are known for their clear streams and lakes, which are ideal for trout. Common fish species include trout, bass, northern pike, salmon, walleye, and muskies.

So, now that you’ve been convinced that the state has plenty to offer, it’s time to take a look at its top destinations. 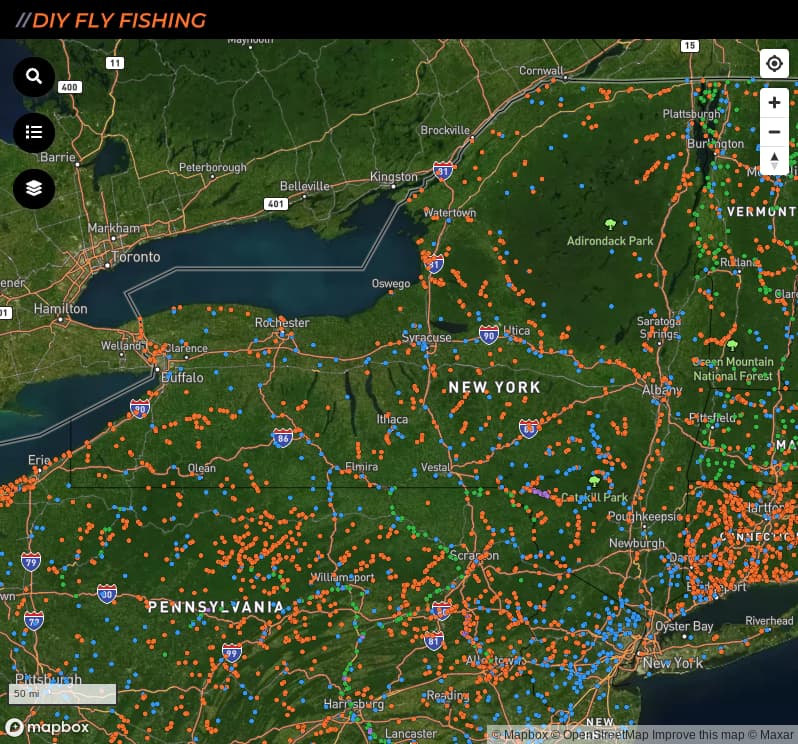 Taking a look at New York, you may be surprised to hear that it offers 70,000 miles worth of streams, rivers, ponds, and lakes. We're talking about over 7,500 ponds and lakes alone to choose from. It's no wonder that it's such a popular destination for anglers looking for a challenge and some fun. As well, thanks to the fact you can find both saltwater and freshwater, the state offers a whopping 165 species of fish. As a fly fisher, you’re probably most interested in the trout, and there is no shortage of them to be found.

New York is a pretty big state and it helps to break down the fishing by region. Listed below are some of the hot spots by region.

The Esopus Creek is a part of the Catskills and makes for a fabulous place for anyone looking to fish for brown, wild, and rainbow trout. You'll find a massive quantity of them here, thanks to the fact they are migrating upstream. This migration happens during their spawning, and they are coming from the Ashokan Reservoir. There are four main parts of the Esopus, with most anglers preferring the low area at Stony Clove Creek.

The creek is quite wide in this section and there are plenty of trout to be found averaging about nine to 12 inches in length. It's recommended that you don't wade in the stream as it can be rather tricky. As well, this stream tends to get pretty busy in the summer because tubers love to make their way along the stream. This means that fall and spring are the best times to visit.

The AuSable River, West Branch is an ideal place to fish for trout starting in about mid-May all the way through until mid-October. There are two sections of the river that are open year-round, but take note that these are catch and release areas only. Plus, it is dependent on the weather that you are able to fish. This river is located within the Adirondack Mountains, which means you're in for some great natural beauty. The trout here are of moderate size, ranging from 10-17 inches. The river features different sections, with some running faster and more aggressively than others. This makes for some challenging conditions. But it may be that’s exactly what you’re hoping for.

If it's wild trout you're after, it's hard to beat what the Delaware River has to offer. Here, the water runs cold and there are a massive amount of insects, which means perfect conditions for trout. In fact, this river has been a popular spot for fly fishing since the 1870s, so clearly it's got a reputation.

While this one isn't stocked, you'll have no problem catching brown and rainbow trout. Anglers boast about not just the conditions but also how fabulous the quality of the trout is here. A large portion of the river is open to the public for fishing, however, there are some sections that are private. Just be sure that you're aware of the land you're on and that it is okay for you to be there.

Located in the Catskills, the Neversink River is another stream that is not to be missed when you come for a fishing trip. This river can be found in New York's southeastern region. While this river may look quite stunning, as it is very narrow and long, anglers describe it as "volatile". You're in for a real challenge when you hit up the Neversink. Unfortunately, there is a large portion of the river that is private, but not to worry. There are some public areas that are well worth the visit.

Typically, you can find wild brown trout and wild brook trout. The fish tend to be about eight to 12 inches in length. This river tends to stay cold, even in the middle of summer, which means the trout are always around. It’s also known for some pretty good hatches, which helps the conditions in a big way. It should be noted that the Neversink's hatches tend to be a few weeks behind many of the other streams and rivers in this region.

Picking the best season or time of year to fish can make a huge impact in the quality and quantity of fish you're catching. As a general rule in New York State, June through the end of September is really the best time for trout fishing. This coincides with the hatches that are taking place in great numbers at this time of year.

What some anglers find frustrating is the amount of bugs that are out during this time of year, such as mosquitoes. They can get quite annoying. If you'd rather avoid them, but still enjoy fishing during this season, opt for September since the temperatures will be starting to cool off. Now, if the mosquitoes and bugs don’t bother you, then summer is a great time for catching fish. Keep in mind that you’ll want to wear plenty of sun protection and dress for the weather, which can get quite hot and even muggy.

If you plan on fishing in the Adirondacks, Catskills, or other regions in the state, then it's important to note that during the months of April and May the water is still at a high level and quite cold, which means there isn't much in terms of hatches. The hatches really start up in mid to late May and then last until fall starts to set in along with the cold. This signals the end of the heavy hatches.

When it comes to the ideal equipment for fly fishing in the streams in New York, there isn't an exact science to it. Typically it's best to customize your equipment to match up with the size of the fish you plan to catch.

You don't want a fishing rod that is less than 4.5 feet in length, and probably no more than 8.5 feet in length. It is suggested that you look for lightweight rods that also offer light spinning. If the area you are fishing in has lots of low hanging trees and brushes, shorter rods are much easier to handle, so you won't be getting caught in them. At the same time, anglers tend to really enjoy being able to cast in long distances, which requires a longer fishing rod.

There are many opportunities for wading, so be sure to bring along your chest height waders.

When it comes to your flies, opt for dry flies such as light cahill, adams, and pale evening dun. You can also use streamers in sizes eight through 10, nymphs in sizes 10, 12, and 14, and even some wet flies if you like.

Anyone who is 16 years of age and older will need a fishing license in order to fish in the state. There are annual, seven, and one day licenses available for both residents and non-residents. Keep in mind that there are special license requirements for "border waters". These are waters that border other states or provinces in the country of Canada. For this reason, you’ll need to do a bit of planning ahead of time to ensure you have the right license. The license and permits are available through the New York State Department of Environmental Conservation.

Picking New York State as your fly fishing destination means you’ve got some wonderful and challenging regions to enjoy fishing in. Both the Catskills and Adirondack are known across the country as superb places for fly fishing. The conditions are just right for all kinds of different trout species to flourish. When planning your trip to either of these regions or other areas in the state, you may want to try to aim for spring or fall. You won’t have to contend with mosquitos and other pests, the temperatures aren’t quite as hot, and the fish will be active and ready for the taking.

Looking for more places to fish?  Check out our DIY Guide to the Best Fly Fishing in America.