Fishkill Creek is nestled in Dutchess County, New York and is one of the many tributaries that feed into the Hudson River. It winds its way through idyllic lakes and several local parks, and provides excellent trout fishing along the way.

The Creek’s beauty has attracted national attention. The Creek remains the focus of conservation efforts dedicated to maintaining the fishery’s aesthetic value and keeping the many wildlife species who call the stream home safe. A visit to Fishkill Creek can be a delight for anglers of all skill levels.

A glimpse of Fishkill Creek in Beacon, New York during the winter.

Fishkill Creek is a 33.5 mile long tributary of Hudson River, making it the Hudson’s second longest tributary. The Iroquois tribe originally called the stream “Tioronda,” meaning “Little stream that flows into big water.” The Dutch settlers in the area later redubbed the Creek “Vis Kill,” meaning “Fish Creek” due to the abundance of trout in its waters. The name was later anglicized to become Fishkill Creek.

Fishkill Creek rises north of Clove and parallels Clove Valley Road, before turning west and picking up several tributaries. Crossing Bruzgul Road, the Creek enters Tymor Park, which is Union Vale’s major community center. It then flows through Beekman, and is impounded into an unnamed lake near Green Haven Correctional Facility. The Creek then flows westward, through East Fishkill, and scoops up its longest tributary, Spout Creek. It flows under Interstate 84 and resumes its southwest course along the slopes of Fishkill Ridge. It then flows over Tioronda Dam, before emptying into the Hudson.

There are 13 dams along the Creek, as the Fishkill has long been a center of industry. The upper sections are stocked with brown trout. The Creek is an important spawning environment for alewife, white perch, blueback herring, tomcod, and striped bass. The Creek also holds a significant amount of wild brook trout. Additionally, the stream’s rich environment contains a few endangered or threatened species, including the bog turtle and wild hydrangea.

The stream was the focus of controversy in 2002, when the nearby IBM facility began dumping pollutants into the Creek, as a result of a new type of chip manufacturing. In 2004, IBM settled a lawsuit brought on by local residents who claimed the pollutants led to an increase in cancer risk. Since then, great efforts have been made by the Fishkill Creek Watershed Committee, in partnership with the Dutchess County Environmental Management Council, to better protect the stream’s natural resources 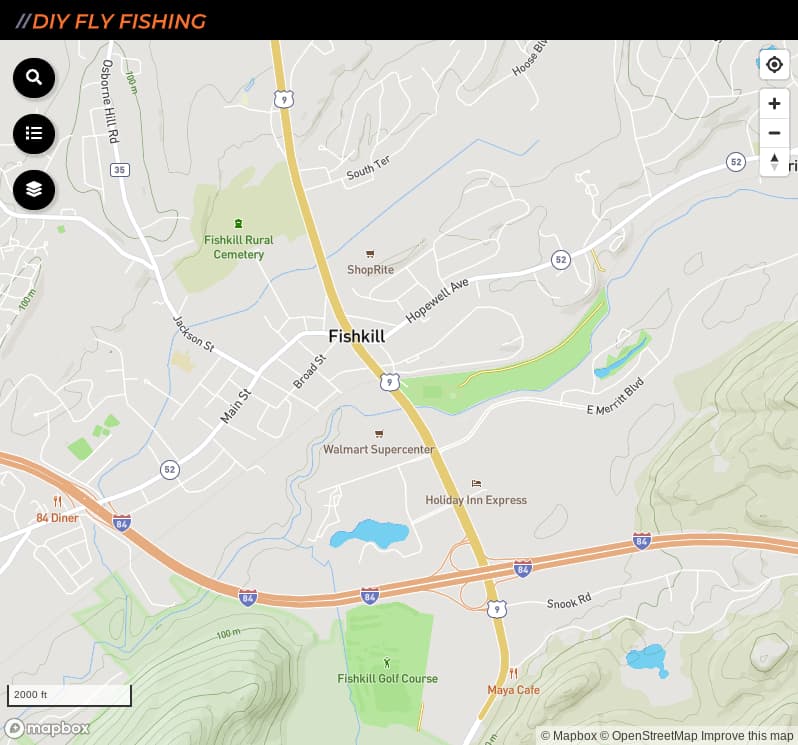 The upper sections provide the best fishing, as the area is stocked with brown trout. Roadside access is available along Route 82, which parallels the stream for much of its length.

The best time to visit Fishkill Creek is in the spring due to the aquatic insect hatches and the stocking of the stream by the state. Fall is also an excellent time to visit, as that is when the brown trout spawn.

A 9-foot 5-wt fly rod with floating line is perfect for fishing dry flies and small nymphs on Fishkill Creek. A tapered 9-foot leader, with tippet size 3X to 5X to match the flies you are throwing, is pretty standard.

Area fly shops, guides and websites that can provide a Fishkill Creek fly fishing report and update on current conditions are listed below:

The state of New York requires that all people who are 16 years of age and older have a valid fishing license. There are resident and non-resident sport fishing licenses available.

You can purchase a New York State fishing license and learn about the most current regulations through the New York State Department of Environmental Conservation.

The closest international airports to Fishkill Creek in New York are LaGuardia and JFK International Airport. There are many other valuable fisheries in the Catskill Region that you will want to make time to explore during your visit to New York.

Sylvan Lake Beach Park offers a secluded getaway in Dutchess County, New York. Located in Hopewell Junction, the Park provides an excellent view of the scenic Hudson Valley. Malouf’s Mountain provides a more unique camping experience, as it is only accessible by hike. But you’ll be rewarded for your efforts if you make the journey. Family owned and family run, the site allows you to get away from city life and unwind in a beautiful wooded setting.

Looking for more places to fish? Check out our DIY Guide to the Best Fly Fishing in New York