DIY Guide to Fly Fishing the Maple River in Michigan

According to the Michigan Dept. of Natural Resources, the Maple River is part of the Cheboygan River Watershed and is located in the Northern part of Michigan's lower peninsula.

The Maple River's mainstream starts at the confluence of the East and West branch and eventually makes it way to Burt Lake.

The Maple River is primarily known for its large wild trout population that is ideal for fly fishing.

Overview of the Maple River in Michigan

It is secluded and shaded by towering pines, bluffs, and hardwoods, and this is the best habitat for the brook, rainbow, and brown trout. The Maple also receives a small run of steelhead (lake-run rainbow trout) from Burt Lake every spring.

The Maple River's mainstream starts at the location of the former Maple River dam (Lake Kathleen) that was removed in 2021.  From there the river flows for about 7 miles south through a riparian forest to Burt Lake.

The Maple River carries a heavy sand bedload that helps form a natural delta near its mouth and Lake Burt.

According to the Michigan Department of Natural Resources, the Maple River watershed has 168 square miles in area and is heavily influenced by glacier deposits.

The east and west branches have vast amounts of coarse-textured glacial till in gravel and lacustrine sand. The sizeable coarse material in the underlying geology enhances water movement and keeps the river cold enough for the trout.

The main stem of the Maple River used to be heavily influenced by the Maple River Dam. There were years when the warming effect from the impoundment resulted in a 5 degrees Fahrenheit increase in the water temperatures. This changed the classification for the river from a cold stream to a cold-transitional trout stream.  Trout fishing on the main steam should improve now that the dam has been removed.

All this to say, the Maple River is one of the better small trout streams in Norther Michigan, in particular for native brook trout. 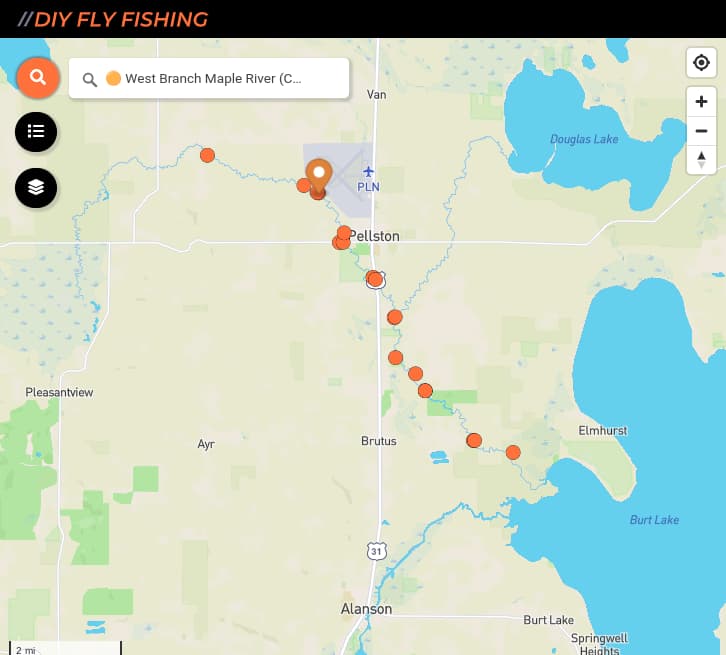 The west branch of the Maple River runs very cold year-round and is an excellent brook trout fishery.  The east branch tends to be warmer and is better known for pike fishing.  Rumor has it that some very large brown trout also hang out in the east branch.

Going downstream of the two branches' confluence at the former Lake Kathleen, you will find more warm water species commingling with brown and rainbow trout.

According to the Maple River SFR Status of the Fishery Resource Report, the trout population is doing well based on the current population estimates and the Brutus Woodlands. It is said that the brown trout dominate the fish community in biomass as well as in numerical abundance.

The Maple River supports a large population of both brown and rainbow trout. The fish will live a portion of their lives in Burt lake and later return to Maple River at different times of the year for feeding, spawning, and thermal refuge.

The number of fish on the river dispels the myth that shallow water at the river's mouth prevents the migrating fish from returning to the Maple River. It is also important to note that recent habitat improvement efforts around Brutus Road station appear to positively affect the trout population.

Where you decide to go fishing on the Maple River will depend on which species of trout you wish to get.

You can get directions to Maple River fishing access points using the DIY Fly Fishing Map.

Some of the best times of the year to go fishing in the Maple River are May through September, and late September through October.

The Maple produces heavy hatches of mayflies including Hendricksons, brown drakes, isonychia, and sulpurs throughout the spring and fall.  Caddis and stoneflies are also prevalent in the River.

Terrestrials are added to the menu in the summer.

Be sure to check the stream conditions before heading out to fish the Maple River. Unfortunately, there is not a USGS stream gauge on the Maple, which normally provide a good indication of current conditions.

Best bet is to contact a local fly shop to get an update on conditions.  Better yet, stop in and pick up some locally tied flies.

Best Flies for the Maple River

Here is list of general fly pattern recommendations for the Maple River:

A 7-1/2-foot 3-wt fly rod with matching fly reel and floating line is perfect for fishing dry flies and small nymphs in the upper reaches of the Maple River. On the main stem, a 9-foot 5-wt fly rod is the way to go.

A tapered 9-foot leader, with tippet size 4X to 6X to match the flies you are throwing, is pretty standard.

The fish in the Maple are not selective but they are spooky.  If you are not getting hits, step down your tippet size and try and be a bit more stealthy!

Area fly shops, guides and websites that can provide a Maple River fly fishing report and update on current conditions are listed below:

The closest airport to the area is Cheboygan County Airport, but anglers can also come in through Pellston Airport or Leo E Goetz County Airport.

Most anglers head to the area by driving, which makes for a fun road trip and tour of northern Michigan.

You can make stopovers along the way for gas or snacks. Hotels and lodgings are plentiful, but there are also cabins for rent on private properties.

DIY Guide to Fly Fishing the Coldwater River in Michigan

DIY Guide to Fly Fishing the Chocolay River in Michigan

DIY Guide to Fly Fishing the Carp River in Michigan

DIY Guide to Fly Fishing the Pine River in Michigan