DIY Guide to Fly Fishing the Grand River in Michigan

For anglers who want to fish near a bustling city, there’s nowhere better than Michigan’s Grand River. It starts a little south of Lansing and then goes north before moving to the west to go through places like Portland, Ionia, and Lowell. The river then heads through Grand Rapids until it stops and enters Lake Michigan at Grand Haven.

If you want to experience the largest river in Michigan, this is where you should be. It’s home to a variety of warm-water fish, like pike, bass, walleye, and panfish, as well as lake-run brown trout, Coho and Chinook salmon, steelhead, and more.

Centerpin Steelhead fishing on the Grand River in Michigan

The Grand River has a major part in the history of Michigan. It was once called O-wash-ta-nong, which means “far away water,” and was a crucial transportation route in the lower peninsula for settlers and explorers when coming into the state at the start of the 1800s.

The river has also played a part in creating the boundaries of Michigan when the Native Americans gave up the land south of the river other than a handful of reservations.

In addition, the Grand River’s name is used on a section of U.S. Highway 16. This area is known as Grand River Avenue and runs from Detroit to Grand Rapids; it was an early route from Detroit into Chicago.

The largest city in Michigan, Grand Rapids, also gets its name from the strong waters flowing from the Grand River. The city is situated right next to the river banks and most of the water for the area comes from the Grand itself.

The longest river in the state is the Grand River, which runs more than 250 miles through nine different cities. It goes through Grand Haven, Grand Rapids, Lowell, Ionia, Portland, Grand Ledge, Lansing, Eaton Rapids, and Jackson before emptying into Lake Michigan.

This magnificent river has a variety of tributaries which also offer the excitement of fly fishing. They include Rogue River, Red Cedar River, Thornapple River, Looking Glass River, and Flat River. It offers an urban fly fishing experience that can’t be found elsewhere in Michigan.

Anglers interested in fishing the Grand River have a ton of options. The river runs right through Grand Rapids so it’s more accessible than many of the other streams in the state.

The Sixth Street Dam in Grand Rapids is the best spot to catch steelhead, salmon and lake-run brown trout on the Grand River.  These fish run up the river from Lake Michigan and tend to stack up below the dam.

The Grand River slows and widens considerably downstream from Grand Rapids to Grand Haven.  This river reach is predominantly a warm water fishery that favors pike, largemouth bass, and panfish.

The are number of boat launches along this stretch that provide easy access (see map above).

The upper Grand River between Lansing and Grand Rapids is best for smallmouth.

The 12-mile stretch from Charlotte Highway to Thompson field routinely produces smallies in the 12- to 17-inch range. Access is limited and challenging. You can float this waist-deep section as well as wade.

You can get directions to all access points and boat ramps on the Grand River with the DIY Fly Fishing Map.

Most anglers find that May through September are the best times to fish the Grand River in Michigan. However, you can also do some excellent fly fishing from the end of September through October after the water starts to cool down. Saying that, fish can be caught in this river at all times of the year.

Of course, the right time to fish the Grand is going to vary based on which fish you want to catch.

The best time to find salmon is going to be from early September through late October.

Chinook salmon start entering the river in late August when the weather starts to cool down.  Coho salmon follow the kings a few weeks later.

The Grand River sees runs of fall steelhead, spring steelhead and even some Skamania (summer) steelhead.

Fall steelhead typically begin running in late September or early October following the Coho salmon run. Peak season for fall steelhead is the month of November. Some of these fish will, however, remain in the river providing opportunities for winter steelhead fishing.

Spring steelhead begin migrating up river in early march to spawn, dropping back to the late in late April or early May.

Skamania steelhead begin running in late May and may remain in the river until early summer.

Football shaped lake-run brown trout are right on the tails of the King and Coho salmon to feast on the eggs they leave behind. Peak season for lake-run browns is the month of October.

Unlike some Michigan rivers, the Grand has a wide variety of fish. You can find smallmouth bass throughout most of the year. You’ll also run across sunfish, bull gills, perch, and crappie if you head out to the bayous.

If you’re searching for walleye, those are also available from spring through winter. However, you will often have a better time catching them in seasons where the temperatures aren’t too cool. So try the second half of spring, summer, and the beginning of all fall for the best results.

Be sure to check the stream conditions before heading out to fish the Grand River. The USGS stream gauge at Grand Rapids, MI provide a good indication of current conditions. 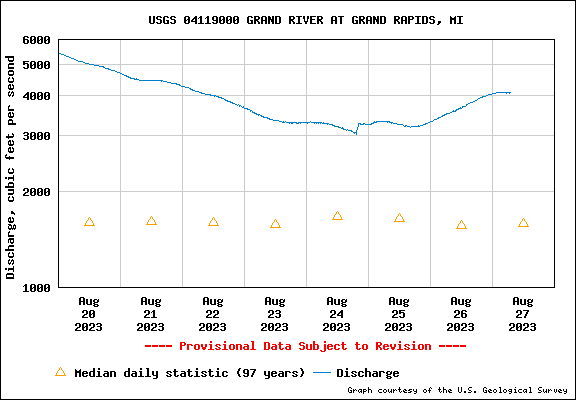 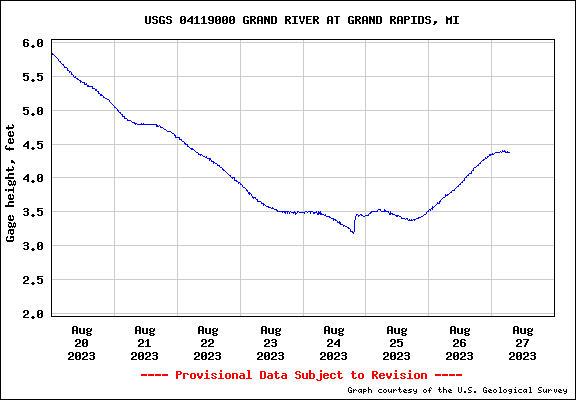 If you are fly fishing for salmon or steelhead, some of the best flies you can use are streamers, large nymphs and egg patterns. Salmon, steelhead and brown trout feed heavily on alewives when out in the lake.  Flies that resemble these baitfish are effective.

Given the size of the Grand River a number of different fly fishing methods have become popular.  You can chuck-and-duck nymphs and egg patterns with an indicator, strip streamers, or even swing flies with a traditional Spey rod.  The method you choose will dictate the flies you use.

Those interested in catching fish other than salmon or steelhead will want to bring along freshwater flies based on the species you want to catch.

For instance, streamers are effective for Smallmouth bass, as are crayfish patterns.  If you like topwater action, smallies are hard pressed to past up a good damselfly imitiation.

If you like to swing flies, RiverBum offers a great selection of classic steelhead flies that will catch fish anywhere. Set includes 30 high quality, hand-tied flies (see list below) and durable fly box.

If you prefer to dead drift flies, BASSDASH offers a great selection of some of the most effective egg flies and attractor patterns. Set includes 57 flies (see list below) and high-grade double-sided fly box.

A 9-foot 7-wt or 8-wt fly rod and matching fly reel with floating line is perfect for fishing for salmon, steelhead and smallmouth bass on the Grand River.

Heading out to do some steelhead or salmon fishing and need an affordable fly rod, reel and line to get started?

Look no further than the Orvis Encounter Fly Rod Outfit.  An 8 Wt. setup that is perfect as a first big-game outfit or backup travel rod.

Area fly shops, guides and websites that can provide a Grand River fly fishing report and update on current conditions are listed below:

The easiest way to get to the Grand River is by a flight into Gerald R. Ford International Airport, which drops you off at Grand Rapids. However, renting a vehicle is a matter of preference since some areas of the river are urban and require no transportation.

Due to the proximity to several cities, there are many lodging options, both hotels and campgrounds. You’ll also have many choices in terms of picking up tackle and other supplies.

DIY Guide to Fly Fishing the Chocolay River in Michigan

DIY Guide to Fly Fishing the Boyne River in Michigan

DIY Guide to Fly Fishing the Indian River in Michigan