DIY Guide to Fly Fishing the Baldwin River in Michigan

Michigan is well-known for having more than 12,000 inland lakes and so many rivers that counting them all could be impossible. However, the Baldwin River is a stream that many anglers frequent, perhaps partially due to its location near the Pere Marquette River. It’s a beautiful place for all sorts of outdoor activities, including excellent fly fishing for brook trout, brown trout and spring steelhead.

With so much great fishing water, attractive natural features, and plenty of parks, it’s no surprise that anglers come in droves to visit the state. Maybe the Baldwin River isn’t as popular as some of the larger streams, but it still has plenty to offer.

Baldwin, Michigan is best known as a destination for fly fishing the nearby Pere Marquette River. Don't, however, overlook the great fishing opportunities in the Baldwin River itself.

As might be expected, the Baldwin River winds its way through the town of Baldwin. This river runs over 25 miles out of the Baldwin-Luther Swamp eventually discharging to the Pere Marquette River.   Tributaries to the Baldwin include Cole and Sanborn Creeks that are both excellent trout fisheries as well.

Birthplace of Brown Trout in US

Baldwin flows in a southern direction until hitting Cherry Valley Township. It then moves southwest to reach Baldwin, which is where it joins Sanborn Creek. One of the most notable things about the Baldwin River is that it was the first place where brown trout were introduced into United States waters back in 1884.

The upper reaches of the Baldwin are best for brook trout.  Heading downstream to the confluence with Cole Creek the river slows and gets deeper.  Here brown trout are predominant and grow to impressive size.

Trout are the most common fish to catch in these waters, but the Baldwin also sees an excellent run of spring steelhead that runs up from the PM.

The waters are clear and pristine, while the surrounding area lets you really enjoy the natural beauty of Michigan. While fly fishing on this river might take a little work, it’s somewhere you will want to visit at some point. 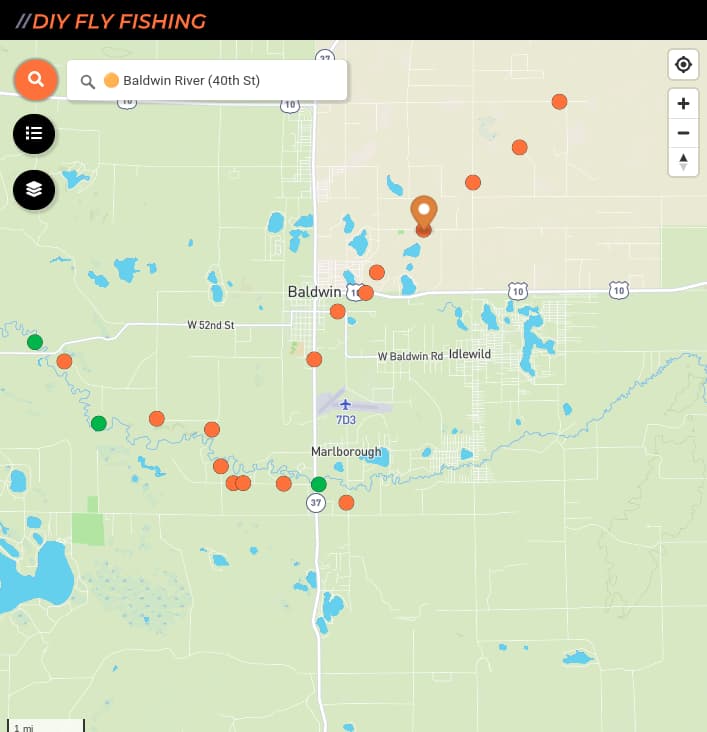 Several roadside pull-offs provide relatively easy access to the Baldwin River.  Following the river from the north to the south the river is accessible at:

The upper reaches above 24th street are best for brook trout.  The River gets  wider and deeper below the confluence with Cole Creek where you will find more brown trout.

Spring and summer tend to be the best time to fish for trout in the Baldwin River. Throughout these two first two seasons of the year, the temperatures are ideal for fly fishing. You’ll also find various hatches through the year, with stoneflies in all seasons, caddis and mayflies starting in April, and terrestrials in June and beyond.

In most cases, fly fishing is best in the later morning hours through early afternoon. However, plenty of people also head out around 4 p.m. to catch fish after work. As a result, the stream is the less fished in the later evening and all the way through until morning.

Steelhead start running up the Baldwin in April and are available well into May.

Michigan can get quite cold in the winter months. If you are going to be fishing in late fall or the winter, make sure you dress in warm clothing.

Be sure to check the stream conditions before heading out to fish the Baldwin River. The USGS stream gauge on the Pere Marquette at Scottville, MI provide a good indication of current conditions in the area. 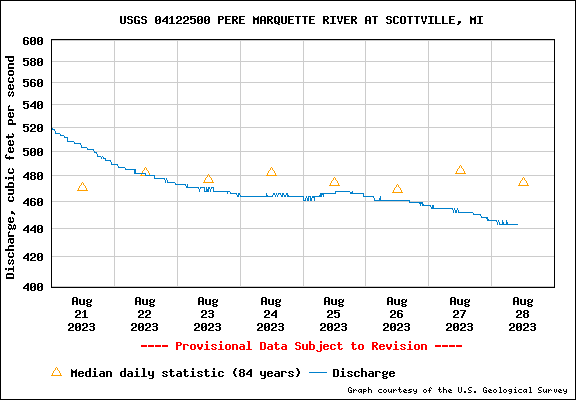 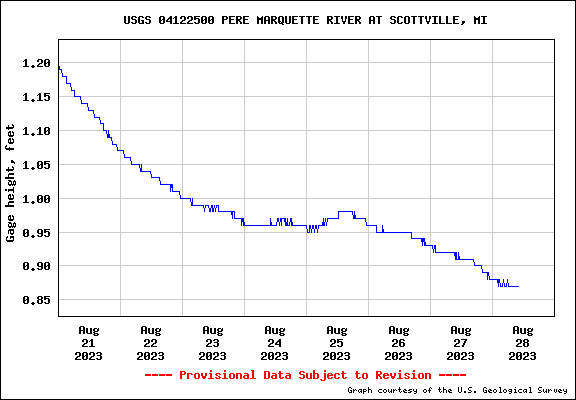 Standard attractor dry flies work well on the Baldwin River, such as Adams, Royal Wulff, Chernobyl Ant, and the Orange Stimulator. Anglers can also do well with basic nymphs like the Zebra Midge and the BH Prince Nymph. As far as streamers go, many fly fishers swear by Wooly Buggers in olive or black.

Here is list of general fly pattern recommendations for the Baldwin River:

A 9-foot 4-wt fly rod and matching fly reel with floating line is perfect for fishing for trout on the Baldwin River. A tapered 9-foot leader, with tippet size 3X to 5X to match the flies you are throwing, is pretty standard.

You'll want to step up to a six- or seven-wt fly rod when fishing for larger brown trout during the Hex hatch, and when targeting spring steelhead.

Area fly shops, guides and websites that can provide a Baldwin River fly fishing report and update on current conditions are listed below:

The Baldwin River is managed as a traditional Michigan trout stream.  The trout season starts in late-April and runs till the last Saturday in September.

Traveling to Baldwin to hit up the river will usually require a flight into Gerald R. Ford International Airport or Cherry Capital Airport. Both of these destinations are several miles from the river, so having a rental car or truck is also a good idea. This also gives you easier access to the areas of the river with the most fish.

There’s one fly shop right near the river, but several of the towns in the area have additional necessities. In addition, Baldwin offers a selection of restaurants, a few hotels, and other shopping destinations where anglers can sleep, eat, and otherwise experience the best of small-town Michigan.

DIY Guide to the Best Fly Fishing in Michigan

DIY Guide to Fly Fishing the Black River in Michigan

DIY Guide to Fly Fishing the Ontonagon River in Michigan

DIY Guide to Fly Fishing the White River in Michigan