DIY Guide to Fly Fishing the Jefferson River in Montana

Beginning near Twin Bridges in Montana, the Jefferson River is often overlooked as a prime trout river, but it can still provide some great opportunities for skilled anglers.

Despite its relatively large size, the Jefferson is somewhat of a hidden gem in terms of fishing in Montana.

For decades, irrigation, drought and overuse have severely depleted the fish population in the Jefferson, but the hard work of conservationists and environmentally conscious farmers have begun to change that.

This river may not provide the some of the blue ribbon opportunities of its more popular neighbors, but the Jefferson is a river on the rise-- figuratively speaking.

While the river is beginning to return to some of its natural glory, it will still present several challenges to anglers. This is probably not the river for any amateur fly fisherman who is simply looking to easily catch high quantities of trout with little effort.

Due to the high amount of irrigation along the river, water levels can be extremely low at times, especially during dry years. This can take a toll on the number of trout, but there are still plenty of fish for the skilled angler who knows where to look.

Case in point check out this monster 27" brown trout taken on the Jefferson River.

The river is separated into three distinct sections, and each presents its own sets of benefits and difficulties.

The lower fish population, the slow flow and sometimes low water levels, and the proximity to so many other blue ribbon fishing rivers mean that there is relatively no fishing pressure on the Jefferson.

Obviously this fact alone does not make it a better option than its neighbors, but the Jefferson does present an intriguing opportunity to many experienced fishermen. If you are looking for cheap thrills and easy catches, this is definitely not the spot for you. But if you are up for a challenging experience in a beautifully isolated part of the Montana countryside, the Jefferson may be just the river you are looking for.

The Jefferson River begins at the confluence of the Beaverhead River and the Big Hole River near Twin Bridges, Montana. From there, this upper section of the river flows for just over 50 miles through open valley area, flanked by the Tobacco Root Mountains. The flow of the river is relatively slow through this area, and the landscape is dotted with cottonwoods and hay fields. The banks are brushy and frequently undercut, but there are plenty of access areas, including several boat ramps. 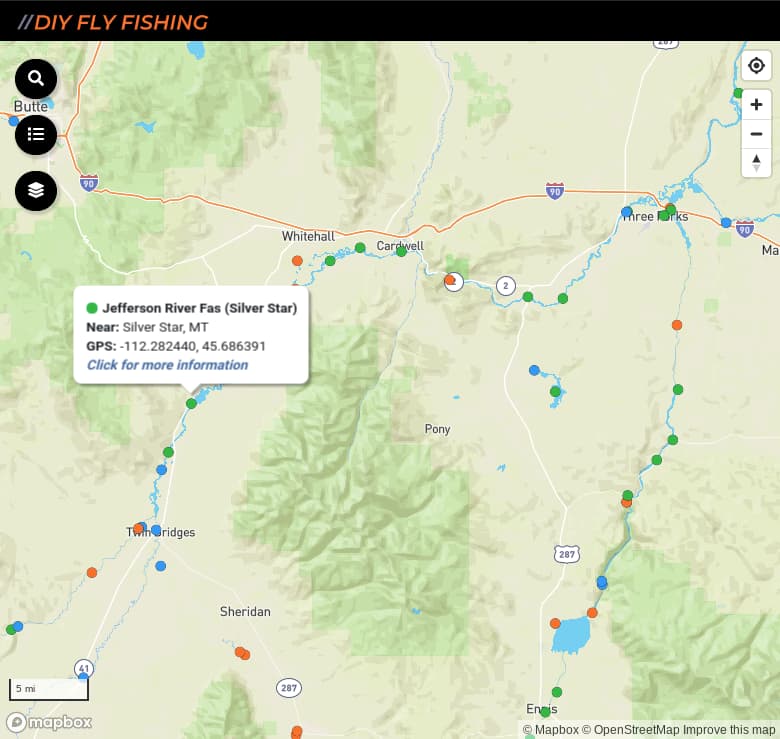 This upper section between Twin Bridges and Cardell provides some of the best opportunities to catch the many brown trout that populate the Jefferson. Wading can be difficult through this portion, so fishing from the boat will be your best bet. Through the work of conservationists and local landowners, the rainbow population is also beginning to grow along the upper portion as well.

As the river leaves the mountains behind, it passes Cardell and enters the Jefferson Canyon. This seven-mile stretch presents several interesting possibilities, mostly in the many deep pools that dot the area. This middle section is also one of the most scenic areas of the entire stretch, winding through beautiful limestone and sandstone walls.

There are several braids and channels through this final portion, but the fishing depends largely on water levels. The water levels, in turn, depend totally on irrigation and the amount of snow melt. While this section is unpredictable, it can present even better fishing than the upper portion, if the conditions are right.

The most consistent fishing is usually during the fall along the Jefferson River, but there are some opportunities during other times. Just before the runoff in early summer, there can be some great fishing along the upper portion of the river.

Once the runoff begins in May or June, the middle and lower portions of the river can provide some good action. Summer fishing can be spotty.

The real opportunities begin around late August/early September. There will be plenty of browns available all the way up to October, and they can be aggressive.

As is the case in any river, your gear will depend upon what time of year you plan to fish. During Spring, large streamers in dark colors usually work well. After the runoff, there are large caddis hatches along the upper and lower portions, and dry flies can have success.

Autumn is the best time for fishing all portions, so you can get more creative then. Hoppers can always be successful if floated along the banks, and large streamers can also attract some of the larger browns that get aggressive late in the year.

A 9-foot 5-wt fly rod with floating line is perfect for fishing dry flies and small nymphs on the Jefferson River. For larger nymphs and streamers a 9-foot 6-wt with a sink tip fly line makes life easier. A tapered 9-foot leader, with tippet size 3X to 6X to match the flies you are throwing, is pretty standard.

There are several USGS gauges along the Jefferson River that are of interest including those near Twin Bridges and Three Forks. There are a number of area fly shops that publish Jefferson River fishing reports. A few to check out include:

The Jefferson River is in Montana's Central District.  Fishing regulations on the entire river include a combined daily limit of 3 trout and in possession, only 1 over 18 inches and only 1 may be a Rainbow Trout.

Looking for more places to fish in Montana? Check out our DIY Guide to the Best Fly Fishing in Montana.

DIY Guide to Fly Fishing the Beaverhead River in Montana

[DIY] Guide to Fly Fishing the Flathead River in Montana

DIY Guide to Fly Fishing the Teton River in Montana