The Madison River is a headwater tributary of the Missouri River, approximately 183 miles long, in the U.S. states of Wyoming and Montana. Its confluence with the Jefferson and Gallatin rivers near Three Forks, Montana form the Missouri River.

The Madison rises in Park County in northwestern Wyoming at the confluence of the Firehole River and Gibbon River, a location known as Madison Junction in Yellowstone National Park.

It flows west then north through the mountains of southwestern Montana to join the Jefferson and Gallatin rivers at Three Forks.

The 19 miles of the Madison River in the park, although easily accessible offers technical dry fly and nymph fishing for rainbow and brown trout averaging from ten to fourteen inches, with an occasional 20-incher. Most of the river inside the park resembles a large spring creek and has been called the world’s largest chalkstream.

The Madison River is one of the most famous and recognizable names in western trout fishing. Thousands of anglers from all over the world flock to the Madison to fish its hallowed waters. Trout in the Madison consist mainly of rainbows and browns running in the 10-16 inch range.

The Madison is home to some of the most famous stretches of water in the west. Many pools and runs on the Madison have angler-given names such as The Barns, Beaver Meadows, Grasshopper Bank, Cable Car Run and Baker’s Hole. 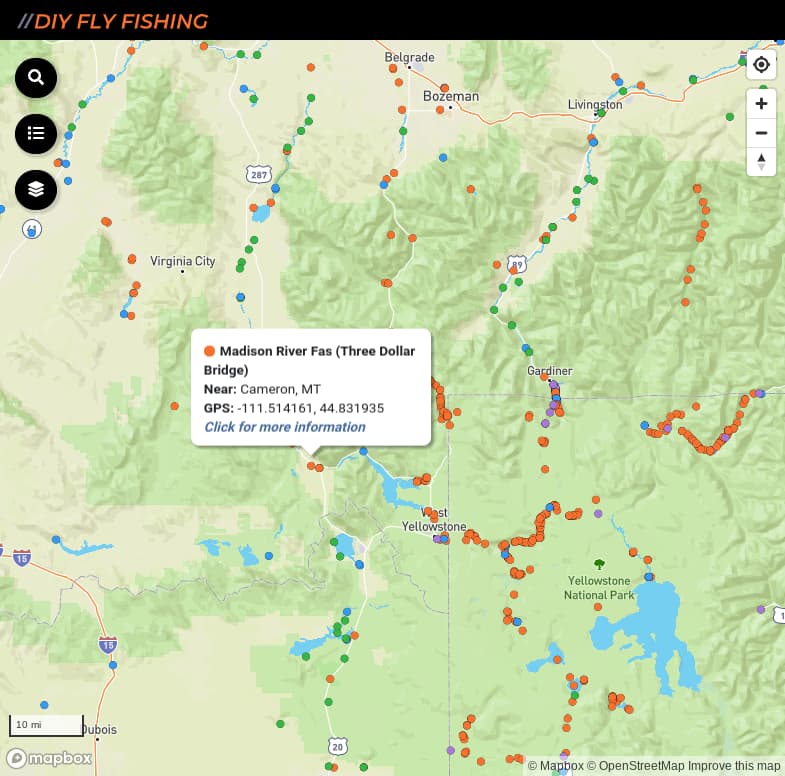 In the fall, monster brown trout move out of nearby Hebgen Lake to spawn. This is perhaps your best chance to catch huge brown trout. The Madison also contains impressive numbers of mountain whitefish.

Fish on the Madison are notoriously picky and hard to catch. Wading the Madison can be difficult on several stretches. The water may look shallow, but often it is deeper than it appears. The water here runs fast and powerful; don’t get yourself into a dangerous situation. The bottom of the Madison between Seven Mile Bridge and Nine Mile Hole is deep silt, making wading dangerous.

The Madison is an early summer and fall river and offers poor fishing in midsummer because of high temperatures contributed by the Firehole River.

Fishing in the fall is excellent when significant numbers of brown and rainbow trout enter the river from Hebgen Lake. These are usually taken with large streamer patterns.

Caddis begin hatching in June and continue to hatch in strong numbers until late fall.The Madison is at its best on overcast and rainy days. Fish early and late for the best results.

Tricos show up in August and September, hatching on the quiet stretches of water. Terrestrials such as low-profile hopper patterns work well from July until October.

September sees the arrival of spawning brown trout and fishing is best in cold, wet weather. Streamers like Wooly Buggers and Zonkers work well. Big, weighted nymphs like a Beadhead Prince will produce fish. Spawning browns can be caught until the season’s end after the first Saturday in November.

The best flies for Madison River match the hatch.  When in doubt though, general attractor patterns will do the trick.

A 9-foot 5-wt fly rod with floating line is perfect for fishing dry flies and small nymphs on the Madison. For larger nymphs and streamers a 9-foot 6-wt with a sink tip fly line makes life easier. A tapered 9-foot leader, with tippet size 3X to 6X to match the flies you are throwing, is pretty standard. 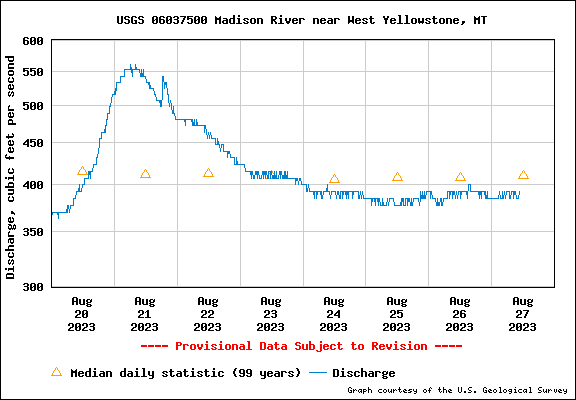 The West Entrance Road and an abundance of pullouts makes access to the Madison River easy. The road follows the river from its confluence for about 10 miles. Access to the river is then restricted to several gravel roads. It is also possible to hike into the Madison River. The section of river from Seven Mile Bridge and Nine Mile Hole may be closed to protect nesting trumpeter swans. Click on the above map icons for access information and driving directions.

The Madison River is fly fishing only in Yellowstone National Park. Catch and release all grayling, cutthroat trout and mountain whitefish. Check the Yellowstone fishing regulations for more information regarding the Madison River and seasonal river closures.

DIY Guide to Fly Fishing the Bitterroot River in Montana

DIY Guide to Fly Fishing the Bighorn River in Montana