[DIY] Guide to Fly Fishing the Flathead River in Montana

The Flathead River is unique among the rivers in Montana in that it is really three rivers in one, with two main sections that are good for fishing.

Beginning in the Canadian Rockies north of Glacier National Park, the Flathead flows south through northwestern Montana into Flathead Lake. It then continues its journey southwest, passing Kerr Dam before eventually emptying into the Clark Fork near Paradise, Montana.

The unique makeup of the Flathead River makes it somewhat confusing to those who are not familiar with the area. The entire river is made up of three portions, the North Fork, Middle Fork and South Fork.

The area where the Middle Fork runs into the North Fork makes up the largest portion of the river, and this is usually the area many people are referring to when they talk of fishing the Flathead. It is also the portion of the river which we will focus on here, as it does provide the best opportunities.

The entire Flathead River is incredibly long, and even this one portion runs 158 miles through northwestern Montana. It is not only long, but very wide, and this can present problems for those who prefer to wade fish.

While you may not catch 20 inch fish on a regular basis, there are large populations of rainbow and cutthroat trout for anyone who knows where to fish. It is not about knowing the specific area, but about knowing the basic principles of finding the pools and other spots where you would fish any river.

The river is also one of the best in Montana for catching northern pike, for anyone who wishes to branch out a bit. In addition to the fishing possibilities, the Flathead has some of the most beautiful scenery and crystal clear water one could hope to find. 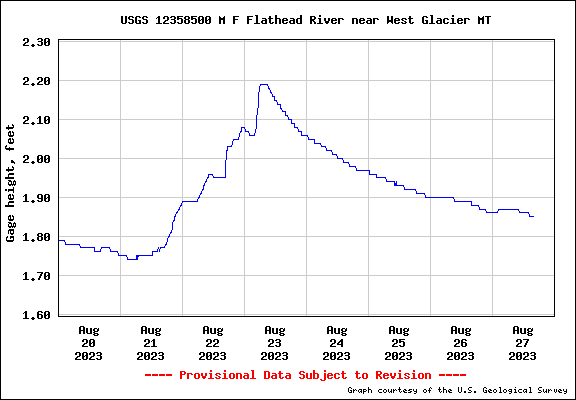 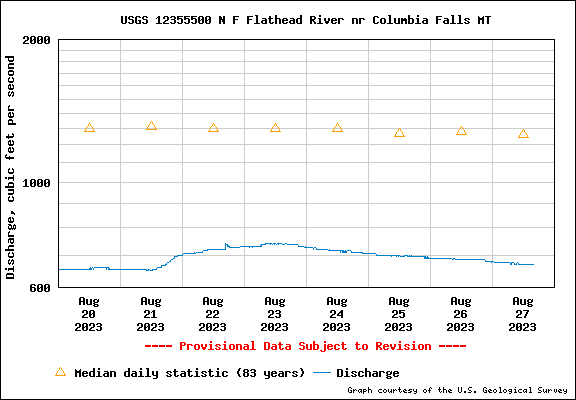 The main part of the Flathead River begins where the North Fork and the Middle Fork meet near West Glacier. This one section of the river is still massive and is separated in two parts by the largest freshwater lake in the western United States, the Flathead Lake. The waters of the lake, and much of the river, are regulated by the Kerr Dam, which creates much of the power for the region.

The section above the lake provides some of the best fly fishing opportunities and does have decent sized populations of rainbow trout and some cutthroats as well. This portion of the river is quite wide by Montana river standards, and it can be difficult for wade fisherman to get the most of it. However, this section also has numerous splits and forks which make up the difference.

Almost all of the water in the northern section of the river comes from glacier runoff. This makes for incredibly clear water that stays quite cool, even in the middle of summer. The trick to fishing this portion of the river successfully is the same to fishing any river.

Find the pools and holes that are behind large rocks, along bank cover, near downed trees and in other areas. Due partly to low fishing pressure, the trout here are not particularly picky. Caddis and hopper flies will usually provide great results, and some trout can even be found down deeper and caught with prince nymphs and sink-tip line.

The area below Flathead Lake can prove difficult for fly fishing. The water is completely regulated by Kerr Dam for power production, and this can make the fishing spotty at best. However, some rainbows and browns can still be caught a few miles further south, past the dam.

The seasonal fishing of the Flathead River follows similar patterns to the other rivers in Montana. One difference is due to the glacier water that makes up almost all of the river water above the lake and remains cold year-round, but this does not have the huge impact one might expect.

Good trout fishing will begin in the Flathead in early spring, as the mayfly hatches begin in March. Pale morning duns, blue-winged olives and others are very important at this time of year.

Summer is considered to be the prime fishing time in the Flathead. This is especially true in the upper portion of the river, where the largest populations of rainbow trout are to be found. Caddis flies are very useful during this time, as is often the case.

More hatches will continue throughout the summer, and the river can still produce good fly fishing results up through September. While there will be plenty of opportunities for rainbows, cutthroats and some browns, the Flathead River is mostly known as being northern pike territory. If you do not plan to take a shot with these, it might be helpful to avoid the times when they are commonly fished.

The fly population in the Flathead River area is very diverse, and the various hatches will have a huge impact on the fishing. The best thing you can do when planning your trip there is to make your plan based around these hatches and use your flies accordingly.

Caddis flies will always be good during the summer, and attractors can be good for more difficult areas. If you plan to fish for the northern pike as well, make sure that you bring strong gear and large flies. Large streamers, strong tippets and heavy rods will be necessary.

A 9-foot 5-wt fly rod with floating line is perfect for fishing dry flies and small nymphs on the Stillwater River. For larger nymphs and streamers a 9-foot 6-wt with a sink tip fly line makes life easier. A tapered 9-foot leader, with tippet size 3X to 6X to match the flies you are throwing, is pretty standard.

There are a number of area fly shops and on-line retailers that publish Flathead River fishing reports. A few to check out are listed below.

Check out our DIY Guide to the Best Fly Fishing in Montana.

DIY Guide to Fly Fishing the Gallatin River in Montana

DIY Guide to Fly Fishing the Teton River in Montana

DIY Guide to Fly Fishing the Kootenai River in Montana