Tarryall Reservoir is fed by Tarryall Creek, which makes its way down from the Park Range before merging with the South Platte River downstream of the reservoir east of Jefferson Colorado.

The creek itself is tough to access on foot or via ATV/4X4 upstream of Tarryall Reservoir, making the reservoir an extremely popular spot with fisherman and anglers.

The reservoir itself was drained in 2002 in order to conduct much needed repairs on the dam, and by 2005 the reservoir had refilled and was open to the public once more.

Aerial footage of Tarryall Reservoir in Colorado by Aerial Solutions

The Tarryall region was named by miners when gold was discovered in the creek bed back in 1859, and it seemed like a good place to stay a while. Gold nuggets were fairly plentiful all along the creek, and most the size of large peas. Gold miners who reached the area later and found it already claimed nicknamed the area “Graball”, as the first group of miners was extremely possessive of the rich gold strike they’d found. The latecomers actually moved further on to settle in the Fairplay area, obviously so named as a dig at the Tarryall mining crews.

Most anglers visit the Tarryall Reservoir in search of rainbows, browns, and pike, all of which are found in plentiful numbers and reasonably large sizes. Boating is permitted, and nearly the whole shoreline is accessible on foot, as well as a few miles upstream of the inlet from Tarryall Creek. The inlet has some nice pools and riffles to ply your flies and lures as well, so it’s well worth the visit if you are already planning to fish the reservoir. 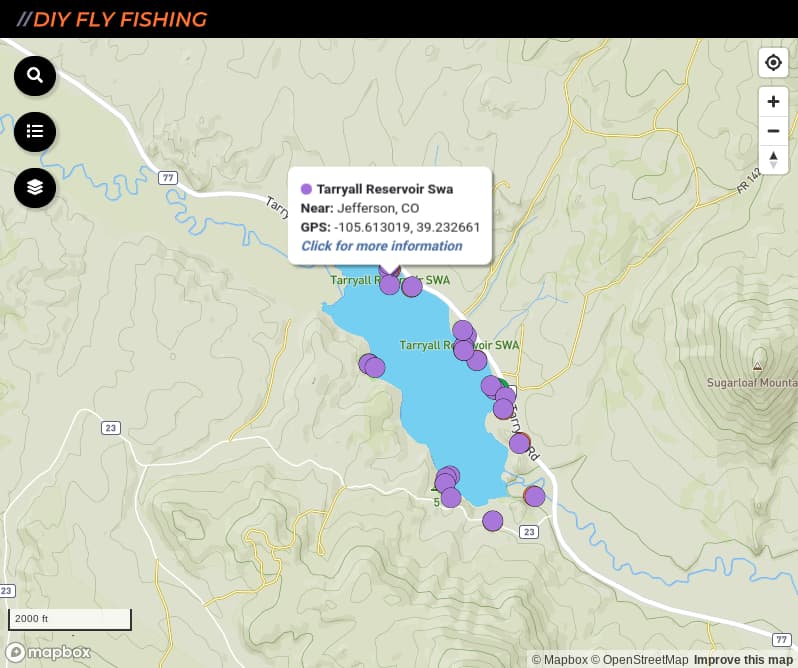 The reservoir has public access from Highway 285 south from Jefferson, Colorado. Park in the designated parking area and take a short hike along the banks to find a prime fishing spot, or get your boat in the water and look for a likely stretch of water while saving your legs the hike. Fishing from the dam is permitted, and there are no restrictions above or below for where you can fish unless otherwise posted. Don’t hesitate to try quiet, out of the way spots along the edges of the reservoir, as the trout like to feed here early in the day.

The inlet of the Tarryall Creek and below the dam for a couple miles both offer fast fishing action, and the rainbows and browns of the area like to strike frequently. If you are planning to visit the reservoir anyway, a quick trip over to the creek often yields very promising results, too. Just make sure you observe and respect all posted private property signs, and don’t fish on private land without permission. Courtesy and respect are the two watch words of Colorado anglers, and if you are a visitor to the region you would do well to observe these principles yourself.

May to November is prime fishing season on the Tarryall Reservoir, with the major hatches being terrestrials, tricos, PMDs, caddis, midges, and BWOs in that order. The best time of day to visit the reservoir is about mid morning until the middle of the afternoon according to local experts, so plan to arrive about 10 a.m. and to pack it in for the day about 3 p.m. or a little after.

The reservoir is extremely popular for fishing during the summer months, so if you want to avoid the rush you may want to visit in the spring and fall. Winter fishing is permitted, but naturally you would be visiting for ice fishing on the reservoir as opposed to fly fishing.

Here are the best fly patterns for the reservoir by order of importance:

Pack your waders for the shallows or the creek and inlet, and take a 9' 5-wt rod for the Tarryall Reservoir. Terrestrials, tricos, PMDs, Caddis, midges, and BWOs are the major hatches of the year there, so pack your flies accordingly.

There aren't too many area shops that publish Tarryall Reservoir fishing reports. A few to check out are listed below.

Fishing regulations on the reservoir and the creek are standard Colorado Division of Wildlife rules, but be careful going further downstream or upstream of the reservoir, as much of the land here is private property along the creekside. Be sure to check your location carefully, and always obtain permission before fishing on private land.

Tarryall Reservoir isn’t too far from Denver, so Denver International Airport is most likely your best bet for a cheap flight nearby. As far as accommodations are concerned, you can stay in Denver and drive the 2 hours out to the reservoir, or find a B&B or hotel in Jefferson for a reasonable price.

There are campgrounds along the Tarryall Creek near Ute Creek and Double Eagle if you don’t mind roughing it. Don’t forget to check local vacation rentals outside ski season as well, particularly in Avon and Vail. You never know what kind of deals will be available in the summertime when ski season is over.

DIY Guide to Fly Fishing the Uncompahgre River in Colorado

DIY Guide to Fly Fishing the Taylor River in Colorado