Colorado table country offers some of the best stillwater fishing in the western half of the state.

Sprawling south and west through Grand Mesa National Forest, the Grand Mesa Lakes are a diverse group of 300 finger lakes in the region that are rife with trout and tourists year round.

If you aren't a fan of crowds or company, head out further on the back roads and into the more remote areas of the Grand Mesa for plenty of rainbows, browns, and cutthroats.

Majestic peaks soar in the distance as you make your way south along 65 on the western edge of the mesa country, and the 10,000-foot elevation isn't the only thing that will take your breath away on a bright day.

The Grand Mesa Lake itself provides excellent clarity and visibility throughout the prime fishing season due to its altitude, low temperature and low concentration of nutrients for plant life in the water. So, as long as you don't visit right after thaw and runoff, you should be able to see clearly to fishing depth on a sunny day. 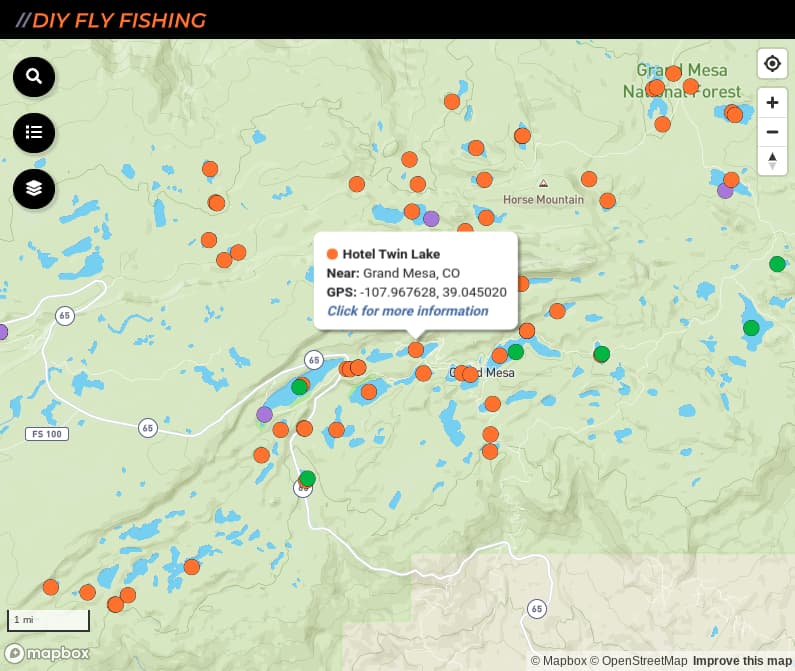 Most comfortable access to the more popular and more concentrated lakes is via Highway 65 South from 70 West near DeBeque. This route will take you through the town of Mesa and along the Grand Mesa Lakes Byway, which feeds off into multiple public parking areas, resorts, RV parks, and campgrounds galore.

You might have to make your way further out along the banks away from civilization and the noise by the more popular lakes, but it's still not too tough to find a quiet spot.

Further out along Lakeview Drive, you can make your way towards the eastern section of the lakes, many of which are local reservoirs that hold stocks of fish that don't see too many anglers throughout the year due to the long drive out to them.

If you'd rather not share the water or would like plenty of space to yourself, definitely check out the reservoir country in the eastern stretch of Grand Mesa National Forest.

Head out Highway 260 East through the northeastern corridor for best results. Kitson Reservoir south of Grand Mesa itself is a lesser-known gem of this region, so you may want to start your exploration here.

Late April through November are the best time to get out on the Grand Mesa during the year, with plenty of active midges, callibaetis, mayfly, and caddis hatches throughout the warmer months.

You can fish Grand Mesa in the winter time, but generally, this is restricted to ice fishing due to the high altitude and intense cold in the winter.

Roads can be somewhat impassable until breakup and runoff in the spring depending on where you are headed too, so plan your trip accordingly.

Recommended rod for this area is a 9-foot with a 4-weight, though you could pack a five weight for some of the lakes where the fish get a little less attention and a lot more food.

Be sure to match the hatch for the time of year. Midges #16-24 are a great all-purpose fly for spring through fall, though you may find that at certain lakes you will have better luck with streamers in #2-#10.

Stand Colorado Division of Wildlife rules applies for trout on the Grand Mesa Lakes, which is a total limit of 4 per day.

However, if you are interested in landing some game fish for eating, or the thrill of the chase, you can catch all the grayling, whitefish, yellow perch, numerous other species with no bag limit provided you are fishing east of the Continental Divide.

Best of all though, since the Grand Mesa National Forest is state land, you have fewer concerns about trespassing on private property if you head out further into the sticks than many other fisheries in Colorado.

Your best bet for a flight close to the table country is to fly into Grand Junction Airport, and then drive east a couple of hours to Mesa or Grand Mesa to settle in.

There are numerous campgrounds, cabins, RV parks, and other places to stay all along the Grand Mesa Lakes Byway that winds its way south to Cedaredge, as well as state campsites further out into the forest land itself.

The Powderhorn Ski Resort is also close by, so you may want to check there for off season discounts on accommodations, and of course, it never hurts to check local off season rates for vacation rentals, too.

DIY Guide to Fly Fishing the Michigan River in Colorado

DIY Guide to Fly Fishing the Fraser River in Colorado

DIY Guide to Fly Fishing the Animas River in Colorado