With its headwaters forming high above Telluride in the mountains, the best coldwater trout fishing on the San Miguel River run for about 45 miles northwest of town before it transitions to a warm water environment.

Thanks to the high gradient and average depths in the 1-3 foot range, the San Miguel makes for an exceptional freestone river with plenty of pocket water and riffles to keep even the most skilled of anglers busy attempting to land one of the five species of trout that swim the waters of this southwestern Colorado river.

A morning fly fishing the San Miguel River in Colorado

The two dominant species to be found along the coldwater stretches of the San Miguel are primarily rainbow trout and their cutthroat/rainbow (“cutbow”) hybrid cousins.

There are brook trout and browns to be had further along the San Miguel where the water is warmer and eventually joins the Dolores River, but the best fishing is still going to be found in the colder runs nearest the headwaters above Telluride. 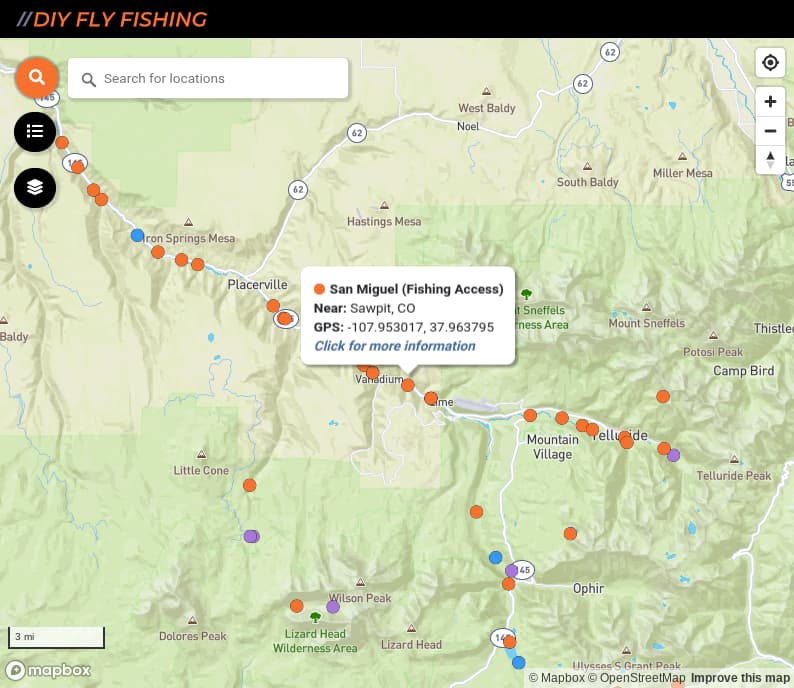 Following Highway 145 out of Telluride provides the best public access to the San Miguel River, and there are numerous active stretches of water along that highway that offer both cold and warm water fishing conditions. Sticking closest to the headwaters seems to be the best method for finding those larger rainbows and cutbows in the colder pockets and riffles during peak season, with the best action in the winter and spring being found in the lower river where the water is warmer during the winter and spring.

Fast and cold waters are found nearest Placerville, and the slower, warmer shallows are typically near Nulca around the Brooks Bridge. Anglers usually have plenty of spots to choose from in both areas, as the San Miguel is less popular than other nearby fishing waters despite its consistent performance year over year for sizeable rainbows and cutbows.

If you plan on float fishing, you are better off starting up around Placerville and working your way along the river towards Nulca in the late spring when the water is highest, though due to runoff season the water clarity may not be the best at this time of year. You can float later in the year, but the floatable stretches diminish significantly from summer into fall.

The insect population along the river is exceptionally rich in caddis and stonefly nymphs, however the major population caddis hatches typically occur in the early spring when the water is too high and fast for fly fishing. That being said, the high muddy banks are terrific stonefly hatching grounds for the lower water months of June through October, making that the prime fishing season of the year. Peak fishing conditions are during the June to October days of summer and fall due to the abundance of stoneflies that are hatching all along the San Miguel.

Caddis fly hatches take place in the late winter and early spring, but the water clarity and depth are both less than ideal for fishing during that January to April stretch of the year.

Summer to fall also offers flying ant hatches, so anglers fond of stoneflies and terrestrials will find their preferred techniques most effective during that time of year.

The most important thing to remember about when to visit the San Miguel is that fishing conditions improve dramatically during the warmest months of the year even along the shallowest and warmest stretches of the river.

Tan caddis, yellow sally, BWO, and Pteronarcys stonefly imitations are effective all along the river.

The trick to making the San Miguel work for you is to look for the deeper pockets and runs and leverage those areas with hoppers and dry dropper rigs during the low water months.

A 9-foot 4-wt fly rod with floating line is perfect for fishing dry flies and small nymphs on the San Miguel River.  A tapered 9-foot leader, with tippet size 3X to 5X to match the flies you are throwing, is pretty standard.

There are a number of area fly shops and on-line retailers that publish San Miguel River fishing reports. A few to check out are listed below.

Fishing regulations on the river are standard Colorado Division of Wildlife rules with a bag limit of any 4 fish at least 16-inches or more in length. While there are numerous public access points to the river itself for wade fishing and float fishing, be on the lookout for posted private property near Telluride.

There is a regional airport in Telluride, making fishing excursions easy to plan in terms of flight access. Typically, most anglers fly into Denver or Colorado Springs and then take a commuter flight out to Telluride.

You can also score some great airfare deals during ski season if you don’t mind a little winter fly fishing, and if you enjoy hitting the slopes and fishing the river in the same day you can often save significantly on bundled ski-and-stay accommodation packages.

Don’t forget to check out local hunting and fishing lodge accommodations for sweet deals during the skiing off season, and remember to check into vacation rentals online since these are often one of the best value choices for stays in the Telluride area.

Visit our dIY guide to the Best Fly Fishing in Colorado

DIY Guide to Fly Fishing the Elk River in Colorado

DIY Guide to Fly Fishing the Crystal River in Colorado