DIY Guide to Fly Fishing the Dolores River in Colorado

There is no better surrounding vista for fly fishing than that of the Dolores River. The San Juan Mountain Range standing proud and jagged against the skies of southwestern Colorado provides a picturesque backdrop reminiscent of paintings of the Old American West.

The region was originally famed for gold and silver mining rather than its prime fishing waters.

Today, the western slopes of the San Juan Range give birth to the headwaters of the Dolores River and it's many tributaries, all of which provide for excellent trout fishing.

The Dolores does not gain its reputation from “back-in-the-day” fly fishing nostalgia either. Numerous anglers have plied the banks and waters of the Dolores and consistently found luck casting among the wild trout who are less wary of flies and lures than their cousins living closer to civilization.

The headwaters of the Dolores can be found among the high country of the San Juan Mountains, and are a good day or more drive from any major city. The remoteness of the region is what really sets it apart as prime fly fishing territory though. There are no ski-slopes or condo developments, power lines, roadside billboards, or any other of the trappings of civilization. Not only are the trout plentiful, but you can also fish in peace and quiet.

Best known for brown trout, the Dolores River is also home to numerous cutthroat, rainbow, and cutbow trout. Due to the remote location populations tend to be large in number and in the individual size of each catch. 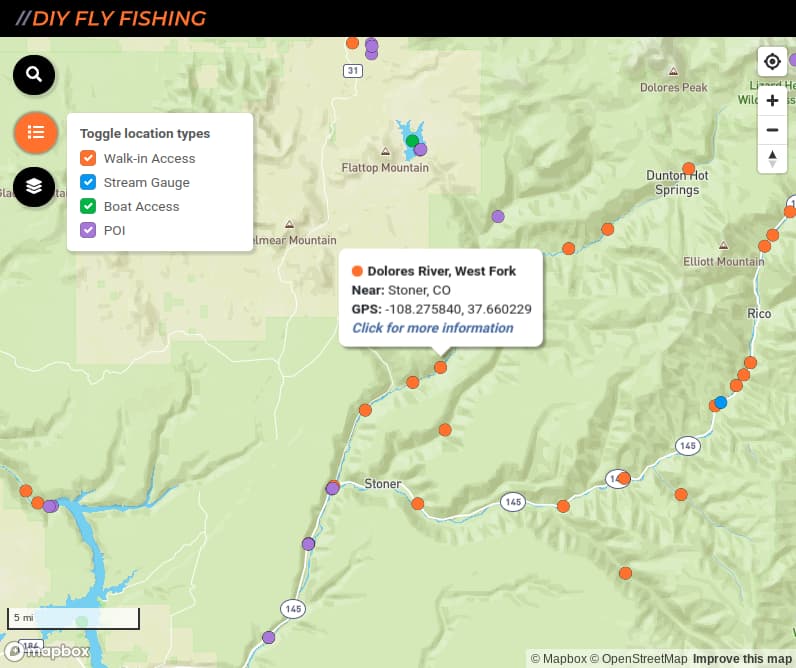 The most popular reach of the Dolores River is below the dam near McPhee Reservoir. That stretch of water earned the river the well-deserved reputation for two things: big catches and large populations of trout.

On the other hand, the Upper Dolores and its myriad feeder creeks is more deserted and remote than the waters near the reservoir, and if you are willing to make the 9 mile trek up the old dirt road that follows the Bear Creek tributary and mile-or-two hike to the water, you are definitely in for a real treat in terms of the trout to be had in this area.

The key to finding the best fishing spots along the Dolores River though is a willingness to get away from civilization to reach those little hidden fisheries rife with trophy worthy fish. The further you are from the highway, traffic, and other anglers, the better you will find the fishing to be.

Be prepared to get out into the wilderness though, as these areas are notoriously hard to reach without 4-wheel drive and some narrow trails. Since most of the length of the river is public access there are far fewer concerns about accidentally trespassing on private property, too The best time of year to visit the Dolores is between mid-June and late October. The hatches are richest during the summer and autumn, and while you can fish year round in Colorado, the fishing in winter is generally slow until after the spring thaw. The best time of day for fishing is generally in the morning or late afternoon until sundown.

Hatches in the area include midges, BWO, stoneflies, caddis, PMDs, and Californicus stoneflies. The following fly patterns are all highly recommended:

A 4-wt fly rod with floating line is perfect for fishing dry flies and small nymphs on the Dolores River.  A tapered 9-foot leader, with tippet size 3X to 5X to match the flies you are throwing, is pretty standard.

There are a number of area fly shops and on-line retailers that publish Dolores River fishing reports. A few to check out are listed below.

The closest local airport is in Montrose, and it is possible to get commuter flights in and out of Montrose to Denver. The upper Dolores River is far from most major population centers, and the nearby towns of Rico, Durango, and Cortez are all roughly an hour’s drive from the river itself.

There are conventional hotels where you can stay in the area, but most prefer to rent the local hunting and fishing cabins or rough it camping out in the wild. Don’t forget to research vacation homes in the area too, as you can often get excellent deals on accommodations for far less than you would pay at commercial locations.

Check out our DIY Guide to the Best Fly Fishing in Colorado.

DIY Guide to Fly Fishing the Florida River in Colorado

DIY Guide to Fly Fishing the Gunnison River in Colorado