Perhaps it is its proximity to the Gunnison, Taylor, and East Rivers that are the cause of its lesser popularity, but as any good angler will tell you, a river's reputation isn't everything.

Anyone who has fished the Cimarron will tell you that not only is it teeming with rainbows and cutthroat, but it is also a prime example of easily accessible fisheries that offer the quiet solitude of the wild.

ColoradoGeographic presents an overview of the three forks of the Cimarron River in Southwest Colorado, which flow into Silver Jack Reservoir in the San Juan Mountains just east of Ouray, Ridgway and Montrose.

The best fly fishing water on the Cimarron River in Colorado is near its headwaters in the Gunnison River Basin. It takes its name from the early Spanish colonial name of Rios de Los Cameros Cimarron, which roughly translated means River of the Wild Sheep.

There's significant variety to the fishing along the Cimarron that you don't find in too many rivers in Colorado. There're miles of shallow freestone alternating with deep pools where the riverbed deepens. It winds its way all the way to the border and beyond around boulders and through meadowland, providing plenty of public access reachable from the highway or reasonably decent side roads. 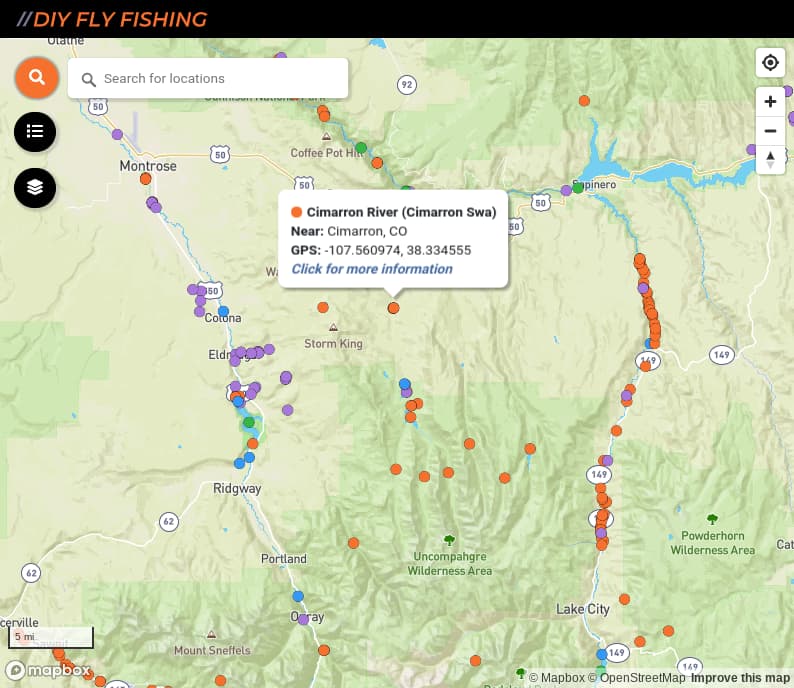 Best Places to Fish the Cimarron River in Colorado

The two best locations for taking larger rainbows and cutthroats are the upper forks closest to the headwater, and the tailwater near the Silver Jack Reservoir. The upper forks are accessible from Highway 50 if you follow the road and don't mind a short hike.

Pools and moving water stay nice and cool here all day even in the summer, and you can lure some monster rainbows and cutthroats to the surface if you approach quietly. There are deep pools and pockets here where the trout are all but invisible despite the crystal clarity of the water. Watch out for private property signs before you park up and head out though, as some private properties run right up to the highway and include stretches of the river, too

The tailwater towards Silver Jack Reservoir is teeming with big browns, rainbows, and cutthroats. It's also easily accessible from Highway 50, provided you don't mind the short hike. Stick to fishing tailwaters during the afternoon in the colder weather, as the tailwaters tend to be a bit too warm in the summer for full daylight fishing. Mornings and evenings are best during the spring and summer when midday warms up the water and the local trout dive deep in search of more oxygen-rich waters.

The big hatches for caddis, mayfly, and stonefly are all between August and September on the Cimarron, so you most likely want to book your visit during the late summer and early fall.

Fishing season is year-round in Colorado, but the best fishing is undoubted during the fall hatches. If you've only got time to visit in the winter, the midges hatch year round and can land some fair sized catches if you stick to the tailwater between about noon and 4 p.m. when the temperature is generally just right.

Check local conditions before setting out to fish, as the condition of the river in every season varies from year to year. Sometimes those deep pools full of rainbows from the previous year are dried up the following season.

Pack a 9-foot rod with 4 or 5 weight line. The fish are plentiful on the Cimarron, but there aren't too many river monsters except in the far reaches of the Upper and Middle Forks.

Waders are also a necessity, and depending on the season of your visit you may want some bug spray and sunscreen. It may stay fairly cool in this part of southwestern Colorado, but that doesn't seem to stop the bug bites and sunburn all that well.

Must have flies patterns for the Cimarron River include:

There are a number of area fly shops and on-line retailers that publish Cimarron River fishing reports. A few to check out are listed below.

Standard Colorado Division of Wildlife fishing rules applies on the Cimarron within the borders of the state of Colorado. No more than four fish per angler per day of any species, and remember to respect all posted private property boundaries.

Always practice Leave No Trace Protocols at all times and be sure that you also follow ethical fishing practices when it comes to catch-and-release fishing.

When you visit Colorado for the fly fishing, it is critical that you help maintain the pristine wild beauty of our natural national treasures.

Montrose, Cimarron, and Gunnison all have plenty of hotels, motels, and similar places to stay to suit just about any budget and taste, though you may want to check into ski resort rentals during the summer for any deals or specials they may offer during the offseason.

It's also a good idea to ask around or search online for local private vacation rentals, as these often yield some pretty good bargains on a stay that are far more affordable and comfortable than many hotels stays.

DIY Guide to Fly Fishing the Piedra River in Colorado