As one of the largest and most beautiful protected areas in the country, Olympic National Park in Washington is both remarkable and ripe for exploration, and the fishing is not half bad either.

Covering about a million square acres, there is a massive variety of terrains and environments to discover. Whether you love the ocean, the forest, or hiking along mountain peaks, Olympic National Park has something for you to enjoy.

The park is located just outside of Seattle on the Olympic Peninsula. One of the most notable aspects of the location is its distinct diversity of environments.

You can go from the coast and travel into old growth rainforests, as well as hike along snow-capped mountains, all without leaving the borders of the park. No matter what time of year you visit, the area is always perfect for exploring, camping, and of course fishing.

Olympic National Park located in the State of Washington, in the Northwest of the United States. Renown for its diversity and stunning landscapes, peaks with glaciers, alpine meadows, old growth forest, temperate rainforest, and Pacific coastline with some of the wildest and most beautiful beaches in the world.

As a DIY fly fisherman, this is one of the premier destinations for a variety of species, including steelhead and salmon. With 600 lakes to choose from, as well as 4000 miles of rivers and streams, there is no shortage of fishing spots for you to master your craft and test your skills.

You can even do some saltwater fishing along the coast, particularly at Seal Rock Campground. The park is so vast that you could spend years trying your luck at different spots without repeating the same location twice.

Today we’re going to provide you with all of the information you’ll need to make your next fly fishing trip to Olympic National Park. Whether you’ve visited the area before or you’re trying it for the first time, we’re sure that you will love fishing here for years to come. 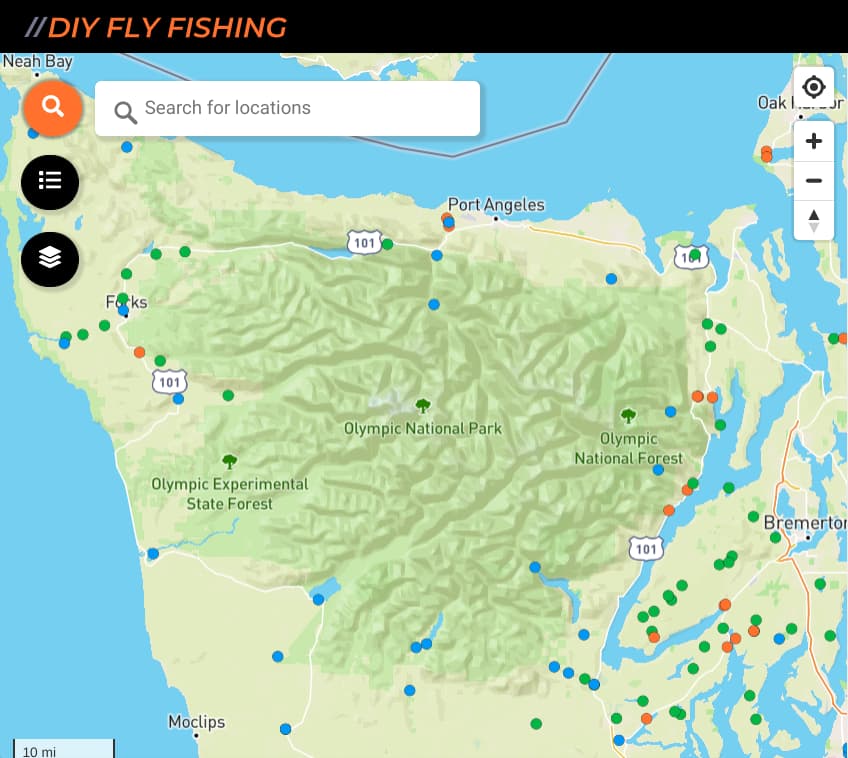 Olympic does not have an extensive road network that bisects the park like Yellowstone National Park which makes many of interior locations only accessible by foot.

As long as you don’t have a problem with hiking and traversing the rugged terrain, Olympic National Park has plenty of fishing spots to find and use. Although some of these are more popular for fly fishing than others, we encourage you to explore as much of the park as possible. Since it’s almost impossible to cover a million acres on your own, you have no chance of running out of locations to visit.

Fly fishing for steelhead on the Sol Duc River

If you’re looking for something easy to find and fish from, this is the river to begin your journey at Olympic. There is a main road following the bulk of this waterway, and it provides fishing for winter steelhead and salmon species. To access this river, follow Sol Duc road and get off when you find a spot you like.

This is the largest waterway in the park, and it is mostly accessed by hiking or floating. Fortunately, the trails are not too rugged, so you should be able to access the water line relatively easily. Also, you can fish from the edge of the river pretty much the whole way through, but be aware that boats may be traveling up and down during the day. 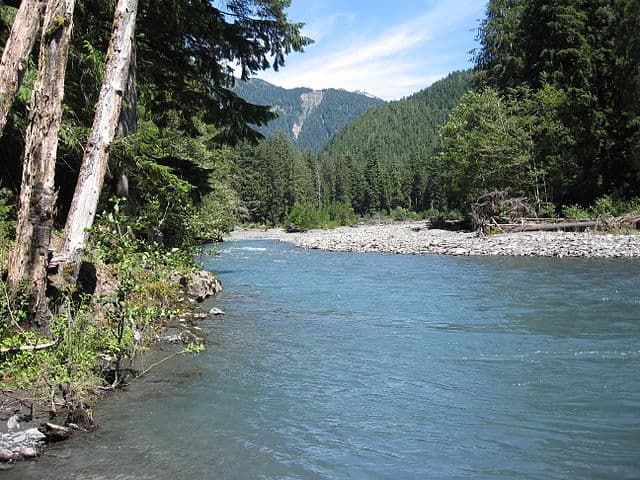 The Queets River in Olympic National Park is known for it's annual run of steelhead and salmon.  You'll also find cutthroat and bull trout, although the latter is a protected species and cannot be targeted by fisherman. Image by Nlaporte

This waterway extends down the edge of the Quinault Indian Reservation, where many anglers congregate to catch hatchery fish that are bound for the Salmon River. If you want to avoid crowds, then stick to the Northern part of the river. Accessing this waterway is relatively easy both on foot and by car, although road access is limited in areas.

Fly fishing Crescent lake in Olympic National Park for Beardslee trout, a species of rainbow trout found nowhere else in the world!

The fjord like Crescent is the largest lake in the park, spanning 5,000 acres, and is over 600 feet deep.

The fishing here is catch-and-release, and limited to the use of artificial flies and lures with a single barbless hook that weigh less than 2-ounces.

Fly fishing from shore can be effect for smaller trout but if you want to hook-up with a big Beardslee trout you'll need to head out into the lake.  Fishing a Kokanee salmon fly pattern on a weighed line will increase your chances of catching a fish of a lifetime.

There is the Lake Crescent Lodge if you wish to stay in high-class accommodations, but camping is also permitted in the area. Access is abundant, and many people traverse the lake in boats, canoes, and kayaks.

Lake Quinault is open to trout fishing during the summer months and is a great place to take the family.  If you go, you definitely want to stay at the Lake Quinault Lodge that is managed by the park service.

Since this body of water is managed by the Quinault tribe, you have to contact them regarding permits and fees. However, they are used to anglers fishing in these waters, so you shouldn’t expect any issues. This four-mile lake sits in the middle of old growth rainforest, so the views are spectacular as well.

Although this lake is smaller than Crescent, there’s not a significant difference between the two (4,010 acres instead of 5,000). This is one of the more popular tourist destinations, as it’s on the East side of the park (closer to Seattle and Olympia), and sits just outside the town of Hoodsport. Nonetheless, you can catch a variety of species here, including salmon, cutthroat, and rainbow trout.

High country lakes that lie in beautiful cirque basins and require hiking to reach are big draw for fisherman in Olympic National Park.  Brook trout are the most populous in these backcountry lake.

The Seven Lakes Basin is one of the most popular areas for backcountry trout fishing and includes Sol Duc, Clear, Morgenroth, and Heart Lakes  It's about a 20-mile round-trip to get to the lakes making it an ideal location for an extended camping and fishing trip.

Mink and Deer Lakes in the Sol Duc River headwaters accessible from Hot Springs Road require a shorter hike and very manageable in a day.

While we are on the subject of fly fishing lakes here are some handy tips to help you catch more fish regardless of which lake you are fishing.

One of the best things about Olympic National Park is that you can access the different areas all year round. Although some spots can get treacherous during the wetter months and the winter, experienced hikers and explorers can manage to find quiet and isolated places if they are committed enough.

Depending on where you go and what you are after, the best time to fish is typically  in the spring through the fall. Many of the fish you’ll find in the park are aggressive toward flies during March and April, which means that it will be much easier to find the catch of the day.

Winter steelhead fishing is popular in some areas of the park, including the Sol Duc and Hoh rivers.

Fly fishing for giant winter steelhead in the Olympic Peninsula

High lakes and rivers that can only be accessed by trails or exploration are open for the bulk of the year, although April through October is usually when you can fish them legally.

When fishing in the park, you are allowed to do so between one hour before sunrise until one hour after sunset. This provides you with plenty of time to relax and get your catch in, regardless of when you prefer to fish. We highly recommend camping or staying at one of the lodges to make the most of your visit.

According to the rules and regulations in the park, you are mostly limited to using artificial lures with barbless single point hooks. At high elevation lakes (above 1,300 feet), you can also use bait, treble, and barbed hooks as you like.

Single rods are allowed, but multiple rods are not. Depending on what you’re catching, you can use knotless nets for landing. No traps or other devices are allowed in the park, so you have to bring the right rod for the job.

Since trout and salmon are the most commonly fished species, you’ll want to bring rods that are designed for them. Here is a brief overview of the different line weights and sizes you should consider for your next trip.

Here are some recommended flies that have proven effective for fishing in the Olympic National Park region:

There are a number of area fly shops and guide services that can provide an update on current fishing conditions in and around Olympic National Park. A few to check out are listed below.

You should check out the comprehensive list of rules and regulations put out by the park here, but here is an overview of what you can expect. We’ve talked about a few of these things already, but it’s imperative that you have a complete understanding of what’s allowed in the park.

Visiting Olympic National Park is a wonderful experience, provided that you plan it right and bring the proper gear along. Here are some general tips to make your stay more enjoyable.

Stay at a Lodge

Quinalt and Kalaloch Lodges are open year round. Crescent Lodge is seasonal, as well as Sol Duc Hot Springs and the Log Cabin Resort. Each of these places is well suited for fisherman and provide easy access to the lakes and rivers surrounding them.

There are many areas in which to camp at Olympic, and they provide excellent access to some of the high lakes and streams that connect the landscape.

Route 101 is going to provide you with the most direct access to much of the park. While inside the perimeter, you can get to different areas through access roads and trails. If you’re traveling from outside of Washington, the best way to get to the park is to fly into Seattle and rent a car to drive the rest of the way in.

Places to Stay Nearby

Olympia is going to be a cheaper and less stressful option if you don’t want to stay in the park. Also, small towns nearby like Port Angeles or Hoodsport are great if you like the small town feel and don’t want to pay high prices.