[DIY] Guide to the Best Fly Fishing in Washington State

Washington fly fishing is some of the best in the US. What makes this state so alluring is the wide variety of options when it comes to places to fish. You’ve got both saltwater and freshwater options that come in the form of lakes, rivers, springs, creeks, and the ocean to explore.

This diversity makes it possible to find a wide variety of species to fish for. The most common species in the state are steelhead, sockeye, coho and chinook salmon, and the major trout species. Of course, before heading out on your fly fishing adventure you will want to do a bit of advance planning to make the most of your trip. 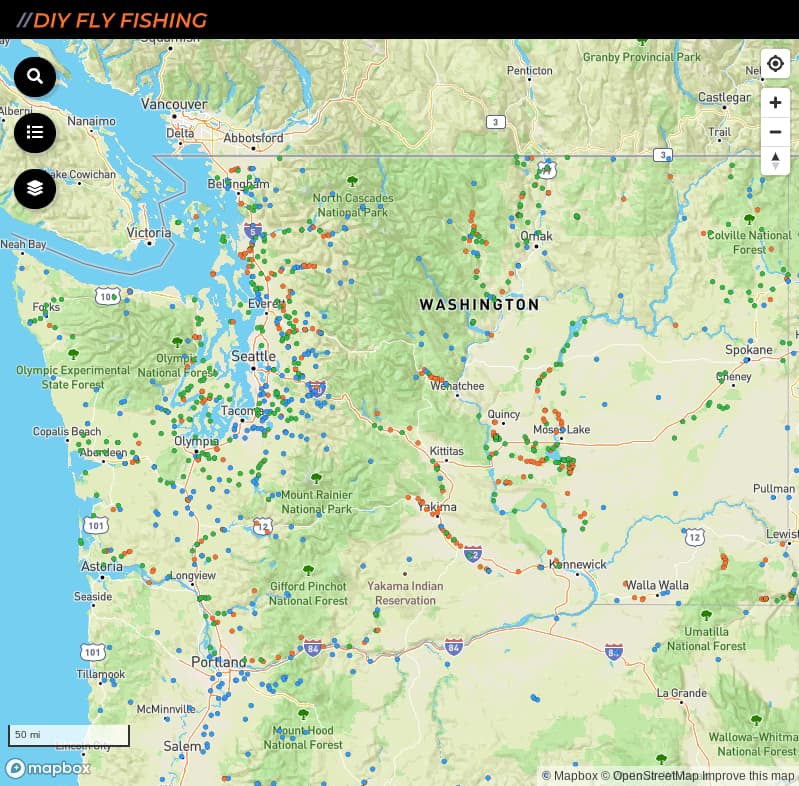 While some states only offer one or the other, Washington features both fresh and saltwater opportunities. In total, the state has more than 3,000 miles worth of coastline that are just waiting to be explored.

The state is also one that experiences variances in the temperature throughout the year, which changes up how and where you should fish.

In general, the state is most well-known for its salmon, steelhead, and trout fishing opportunities.

While people flock to the southern coast at all times of year, if you're specifically looking to fish for salmon, you'll want to visit in the summer. The area is known for the abundant amount of salmon running during the warm summer months. If you're looking to follow their route, try checking out the areas of Westport, Willapa Bay, Long Beach, Columbia River, and Ilwaco. These areas offer the most chance of a successful fishing trip. As far as where to stay, some of these areas are a little bigger than others.

The Port of Westport is well known for its camping, hotel, and lodging and is home to the Twin Harbors State Park. This is ideal for nature lovers who want that entire outdoor experience. Another popular lodging destination is Long Beach, which is just to the west of Willapa Bay. Again, you can find camping and RV parks, but at the same time, this area is known for gourmet dining and impressive lodging. There’s a bit of everything here. This area gets especially busy in mid-August, due to the fishing.

The mouth of the Columbia River is a prime spot for catching salmon, and with that said, you can stay at Cape Disappointment State Park. August is the best month to visit, so be sure to book in advance as it gets quite busy.

For a totally different experience, there is the Northern Coast of Washington. This area is also popular in the summer for fly fishing, but that continues into the fall. Here you can take advantage of the coho and chinook that are passing through on their way north. In fact, this is where you’ll find some of the largest salmon and steelhead, so it’s not to be missed.

Standout locations along the northern coast include Port Angeles, Sekiu, Forks, Neah Bay, La Push, and the well-known Olympic National Park, which offers camping facilities. When searching for accommodations, Sekiu is usually a safe bet. While these areas are quiet most of the year, from August through November the anglers flood in. Keep in mind that even though it won’t be cold, this area can see a lot of rain, so you’ll want to pack accordingly.

The Ross Lake National Recreation Area is an excellent place to enjoy fishing for rainbow trout from July 1 to October 31. This is about as far north as you can get in the state before hitting Canada. If you're okay with camping, this is the place to be as it has rugged terrain.

On one side of the lake is the Pasayten Wilderness, and the other side is the North Cascades National Park. The scenery is stunning and you’ll get that sense of the true outdoors without the hustle and bustle of city life. Keep in mind that there are regulations in place, so you need to be well aware of them before you start your fishing.

Bull trout can be found here, but because they are a protected species you'll need to release them after catching them. What makes Ross Lake a bit of an obstacle is that access can be tricky. A great option is the Diablo Lake water taxi. Here, you can jump on the taxi and go to Ross Lake Resort and on to the campsites from there.

Obviously, planning your fly fishing trip is dependent on what kind of fish you’re looking to catch. There are some that can be found all year round, such as the steelhead, while others are only at specific times of the year.

Here's a breakdown of the popular species and when they can typically be found:

Washington offers the opportunity to fish from the shore or by boat, depending on where you are. You’ll want to consider your options ahead of booking your trip. Some of the more remote areas will require access by boat only.

Of course, clothing is another consideration. It can get rather chilly and damp in the winter, and quite warm in the summer months.

Rain gear is important to have on hand, as Washington gets a fair amount of precipitation. Layers are always your best bet, so you can take some away or add to them as needed.

The flies you'll need for a successful fly fishing trip depend on what fish species you are after, and how you like to fish.

One last item to be sure you check off before heading off for your fishing trip is to get yourself a fishing license. Anyone who is 15 years of age or older will need to have a valid fishing license. Leaving yourself plenty of time to get this license is a good plan so you don’t find yourself scrambling at the last moment. You can apply for it online at the Washington State Department of Fish & Wildlife.

In order to reach the state and get around you’ve got a few options. You can always drive, travel by boat, take a bus, take a train (Amtrak has east-west and north-south options), or take a plane.

The main airport in the state is Seattle Tacoma International Airport. The cities and towns of Port Angeles and Spokane have smaller airports.

Many of the accommodation options include such things as camping, RV grounds, and cabin rentals. This is great news for budget-minded travelers as you’ll find plenty to choose from that doesn’t break the bank.

Obviously, if you travel with a few buddies, you can split the cost making it all the more affordable.