When you think of this flat, Midwestern state, you may think of Cedar Point, boring tollway drives, and particularly harsh state police who like to ticket speeders. But the Buckeye state is so much more than that. With approximately 50,000 lakes (2200 of which are greater than five acres in size) and nearly 60 rivers and creeks, Ohio boasts plenty of watersport, including fly fishing.

One thing that makes the state attractive to anglers is the fact that the Ohio Department of Natural Resources (ODNR) stocks some of the state’s rivers with non-native trout species like rainbow, brown, and steelhead. This, along with the plentiful bodies of water, makes Ohio a place worth adding to your fishing bucket list. 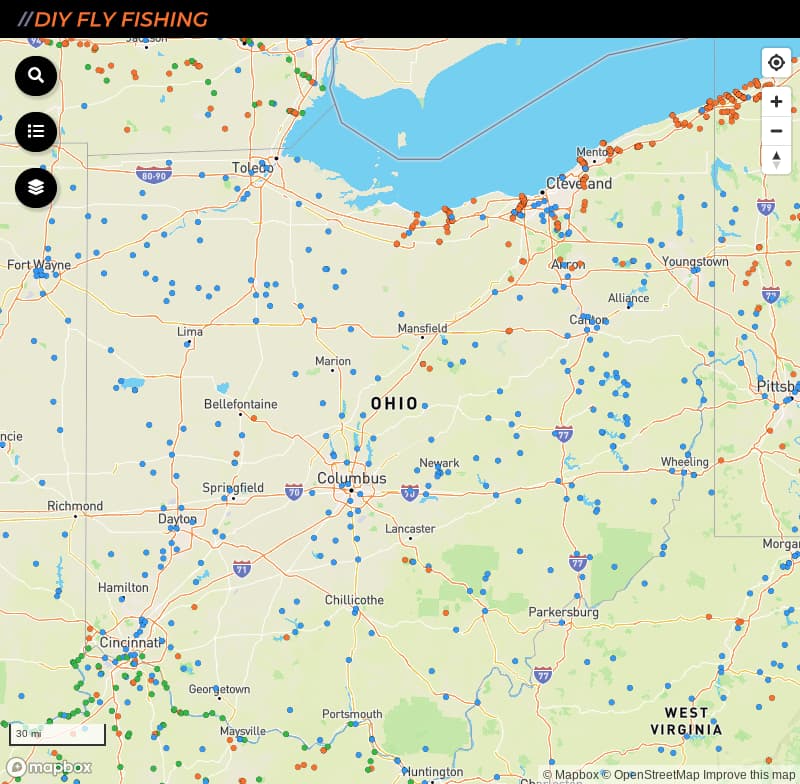 Best Places to Fish in Ohio

Rivers abound in the state known for its bland, flat landscape, offering little nuggets of treasure for fishing enthusiasts and nature lovers alike. Because trout is the most commonly sought fish for Ohio fly fishing, these are stocked each spring and fall, however there are also opportunities to fly fish bass, muskie, carp, and more. With several fly fishing organizations throughout the state, the sport is alive and well among its loyal proponents. Let’s take a look at some of the best Buckeye waters for engaging in the popular sport.

This sixty-mile long spring creek runs from near Bellefontaine all the way to Dayton. It’s a tall order to find native trout in Ohio, and this is one of the rare waters that contains them, in the form of brook trout. The waters are also stocked by the Division of Wildlife with six- to eight-inch brown trout. The clear waters can present a challenge when they’re low, as can the overhanging brush and limbs. For the best chance at brown trout, go for the undercut banks. There are some great riffles and pools, if you’re game to try these out. While access points aren’t overabundant, you can find the best options along roads #36, 55, and 29/296. For native brook trout, you’ll have your best luck at the headwaters. While you may have to have some patience to catch harvestable fish, the Mad River – Ohio’s largest cold-water fishery – is worth checking out.

This area is a branch of the Mohican River, and is one of the few Ohio rivers that maintains year-round temperatures suitable to host a trout population. While the Upper Clear Fork is predominantly private property, the Lower Clear Fork between Pleasant Hill Dam and State Route 3 is a popular public fishing destination. Aside from brown trout, you may also encounter carp, bass, bluegill, and once in a blue moon a muskie. Take advantage of the hatches if possible – sulfurs between Mother’s and Father’s Day, Light Cahill from mid-June to mid-July, and Caddis and Midges nearly year-round. On an interesting trivia note, the Clear Fork River also contains gold – but hold up! You’ll need to hold membership with the Gold Prospectors Association of America to try your “fishing” luck for the shiny stuff.

The Little Miami River, an Ohio River tributary, meanders throughout 111 miles and five counties in southwest Ohio, joining up with the Ohio River to the east of Cincinnati. Since the LMR is a warm water habitat it is not conducive to maintaining a trout population. But what it does offer are smallmouth and largemouth bass, sauger, white bass, walleye, and rock bass. One of the most exciting aspects of fly fishing in the LMR is that with 80 fish species roaming the waters, you might be surprised by what comes up on the other end of your line. You might even find the occasional unsuspecting mussel or muskie. Striped bass also pop up from time to time, and can reach 10-15 pounds.

This stretch of waters that runs from Conneaut, OH into Dickonsburg, Pennsylvania is known as the Steelhead Capital of the World. If that isn’t enticing enough, then we don’t know what is! Not only is the stream home to an abundance of steelhead, it also houses 78 other species of fish including bass, northern pike, and walleye. A 21-mile stretch of this gorgeous natural gem was designated as a State Wild and Scenic River by the state of Ohio, in 2005. The catch? Unfortunately there is one. Public fishing areas of Conneaut are somewhat limited, with the best bets being the Lakeville Park Access and the Conneaut Harbor. If you’re feeling bold, knock on some farm doors and see if you can get permission to fish some private areas of the famous creek.

This tiny little gem is located a couple of miles outside of Wooster, and is great for those anglers who just can’t bring themselves to eat their prey – it’s all catch and release in this popular little spot. But at least you can keep in practice year-round as you enjoy the plentiful trout fishing on the banks of the beautiful, pebble-bottomed creek. Even though you can’t put your trophy catch on a plate with a tasty sauce, you can still enjoy some outdoors time with the kids, and teach them how to be gentle with the little creatures when your goal is to get them safely back into the water so they can grow bigger.

Best Time to Fish in Ohio

On the popular Mad River, spring is the best bet. Summer causes the water to get warm and low, making successful fly fishing a challenge. Fall through December can be lucrative for Mad River brown trout. At Conneaut Creek and other steelhead mainstays throughout the state, the steelhead start coming into full swing in late October and are typically plentiful through April. Spring, early summer, and December as well are all excellent choices for fly fishing at Conneaut Creek. At the Clear Fork River, October offers the rewards of the annual brown trout stocking.

Keep an eye on hatching schedules as well, even if you aren’t going to use the real thing. Black Stoneflies are in late February and March. Green Sedges start in April and hatch through June, while May produces small hatches of March Browns. Brown Drakes come in the first half of June, along with Cahills, though these are not very prolific.

As for the basics, you will want waders, wading boots, a rain jacket, a wide-brimmed hat (to keep your head dry, prevent sunburn and protect your eyes), insect repellant, a pack to carry smaller items, medical supplies, binoculars, a camera, and a flashlight.

Your rod and reel rig will, of course, depend upon what fish you’re going for. With the great steelhead fly fishing in Ohio, you might want a 10’ 7 weight, or an 8 weight if you think the extra heft won’t become tiresome swinging the rod around all day. A larger arbor reel is a good choice for steelhead because it will result in faster line pickup and fewer kinks. As for your line, you want it to be fairly closely matched to your rod weight.

If trout is your primary target, you’ll want a shorter, lighter rod and reel setup. A 9’ 5 weight is an all-around great all-purpose trout rod that’s ideal for those who aren’t sure what they need, although for trout you can go as low as a 3 weight or as high as a 6 weight, depending upon the specific location and situation in which you’ll be angling.

Appropriate flies also vary. For example, dry flies tend to bring good results with the trout in the Mad River. Winter fly fishing could require size 18-20 nymphs, or 20-22 midges. Streamers have been known to bring in a surprise fish or two in the Little Miami River, with nymphs and streamers being a good choice for casting under heavy cover. Bass is still fairly obscure prey when it comes to fly angling, but if you’re game, you can try aquatic insect or minnow shapes.

It’s one of the dreariest parts of the sporting process, for sure, but you must obtain a fishing license from the Ohio Department of Natural Resources’ Division of Wildlife. Residents and non-residents ages 16 and older are required to carry a license with them while engaging in the sport (the license may be displayed on mobile). There are a few exceptions – May 7 and 8, 2016 are free fishing days in Ohio, and those over age 65 or residents fishing on private property are exempted from the requirement. Non-residents can choose from a one-day, three-day, or annual Ohio fishing license.

Be sure to check the specifics of the area you’re fishing to make sure you’re clear on whether it’s catch and release, and make sure you adhere to the statewide limits. Trout and bass currently carry a five per day limit, with the harvestable bass size set at 12 inches. Steelhead, on the other hand, has no daily limit and no size limit.

Ohio may seem like the land of grass, farms, and the occasional urban environment, but the state harbors a wide range of peaceful, pristine havens for fly fishermen looking for a healthy challenge doled out by Mother Nature herself.

Looking for information on fishing for steelhead in Lake Erie tributaries?