Abrams Creek was named after the Cherokee Chief of the town of Chilhowee named Abraham. It flows underground through limestone depressions for almost three miles before emerging at Cades Cove. From Cades Cove, Abrams Creek flows approximately 12 miles to Chilhowee Lake. Along the way 18 smaller tributaries empty into Abrams Creek, the largest of which is Anthony Creek.

As do many of the best trout streams in America, Abrams Creek located high in the Great Smoky Mountains National Park supports a diverse population of aquatic insects and some of the largest rainbow trout in the park due to the fact that it flows through limestone geology.

Abrams Creek flows through through Cades ﻿Cove in the Great Smoky Mountains National Park. Geologically, Cades Cove is an isolated mountain valley known as a limestone window created by weathering and erosion over the course of millions of years. Limestone windows are normally flatter than other mountainous valleys, and are typically coated with rich, fertile soil as is the case for Cades Cove.

The combination of limestone geology and rich soils adds buffering capacity and nutrients to the water of Abrams Creek enabling it to maintain a neutral pH (good for trout) and support a diverse population of macroinvertebrates including stonefly, mayfly and caddis nymphs.

Another big advantage of spring creeks is they provide more uniform water temperature through out the year as they are fed by groundwater. This opens up the possibility of fishing Abrams Creek year round as Ian and Charity Rutter of R&R Fly Fishing discuss in the video below. 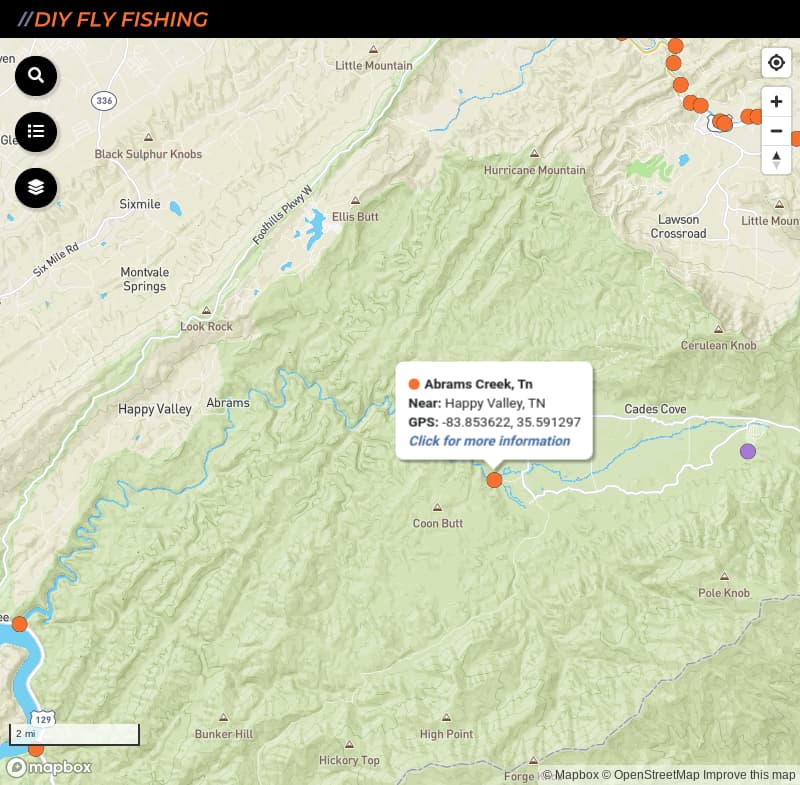 From Sugarlands Visitor Center follow the signs to Cades Cove ~ 24 miles on Little River Road. Follow Cades Cove Loop Road for ~ 5 miles and turn right (just past Marker #10) onto the gravel road following the sign to the Abrams Falls Trail Head. Click on the map icons above for driving directions to the trail head parking area.

The best trout fishing is from the Abrams Falls Trailhead in Cades Cove downstream to the Abrams Creek Campground. Emerging from Cades Coves, Abrams Creek takes on a the characteristics of limestone spring creek for several miles before reverting to a freestone stream as it flows some 12 miles to Chilhowee Lake.

The spring creek section of Abrams Creek is accessible from the Abrams Falls Trail en route to Abrams Falls, one of the most popular waterfalls in the park.  Before reaching Abrams Falls, Abrams Creek leaves the trail in several places forming horseshoe bends that are up to a mile long (see inset map).  Fishing Abrams Creek in these areas requires a bit of bushwhacking and at least a half day if not a full day but is well worth the effort. 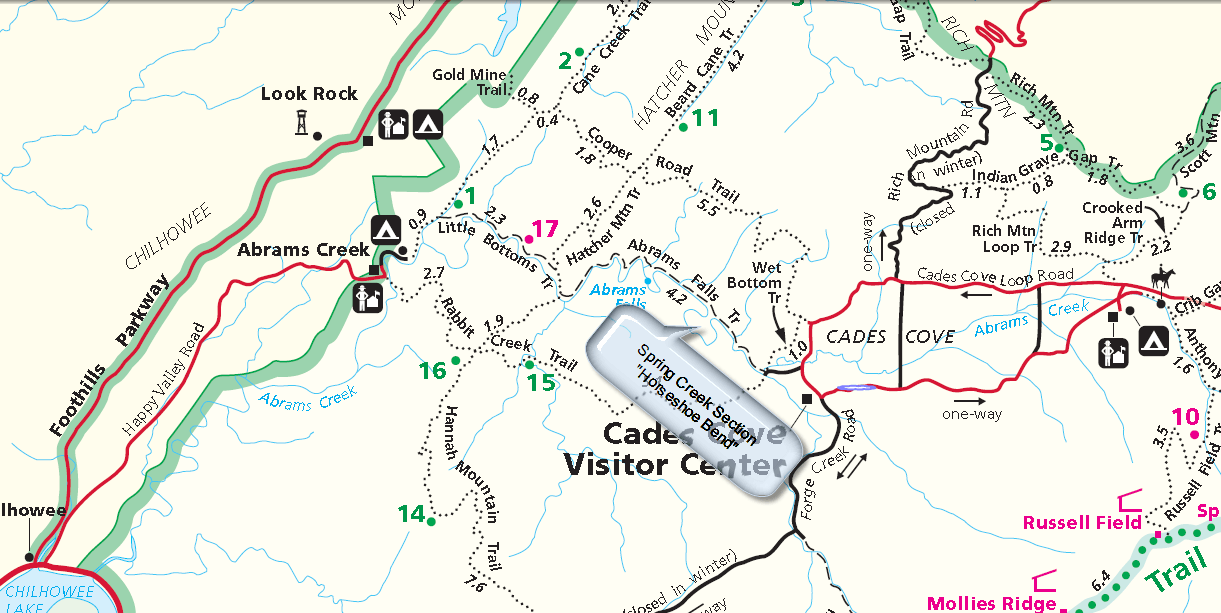 A few things you should know before heading out to Abrams Creek, the first being access. To access the best trout waters on Abrams Creek you'll need to navigate the Cades Cove one-way loop road.Normally, in the winter this is not a big deal as the summer crowds have faded away (all the more reason to get out and fish), but as the weather improves plan addition time to traverse the 11-mile loop road as Cades Cove is the most visited area in the most visited national park.

Don't let this deter you though, as Abrams Creek boasts the highest population of wild rainbows in the park, on the order of 5,000 trout per mile, and is worth the wait.

Also note that the Cades Cove loop road is periodically closed due to adverse weather or for maintenance and the only other way to reach the best trout water upstream of Abrams Falls involves a rather lengthy hike from Happy Valley Road via the Abrams Creek Campground (see map above).

The Great Smoky Mountains National park maintains a hot-line where you can get current information on weather-related and planned closures of area roads at 865-436-1200 ext 631.