The massive Clark Fork watershed comprises an area of over 14 million acres, with its vast network of streams and rivers cascading and meandering for over 28,000 miles through the rugged, mountainous landscape of western Montana.

Nature has an innate ability to heal itself in spite of humans attempts to destroy it. Please don’t misunderstand, this will not be a political dissertation. We love fishing, in particular fly fishing. Before you schedule your fishing vacation to the great state of Montana to tackle the Clark Fork River, you should have a basic understanding of the miracle that is the home to rainbows and browns.

Over a century ago, a copper boom occurred in this region. Hundreds of mines were dug, and then in 1908 a flood occurred which washed contamination into the Clark Fork River. Over 120 miles of this river was contaminated, as these toxins spilled into the river itself and the banks. This is when the trout population disappeared.

Thankfully, in a twist of irony, arsenic was discovered in the 1980’s in Milltown drink water. This is what spearheaded clean up of the river, which is why we are able to enjoy the Clark Fork River today. 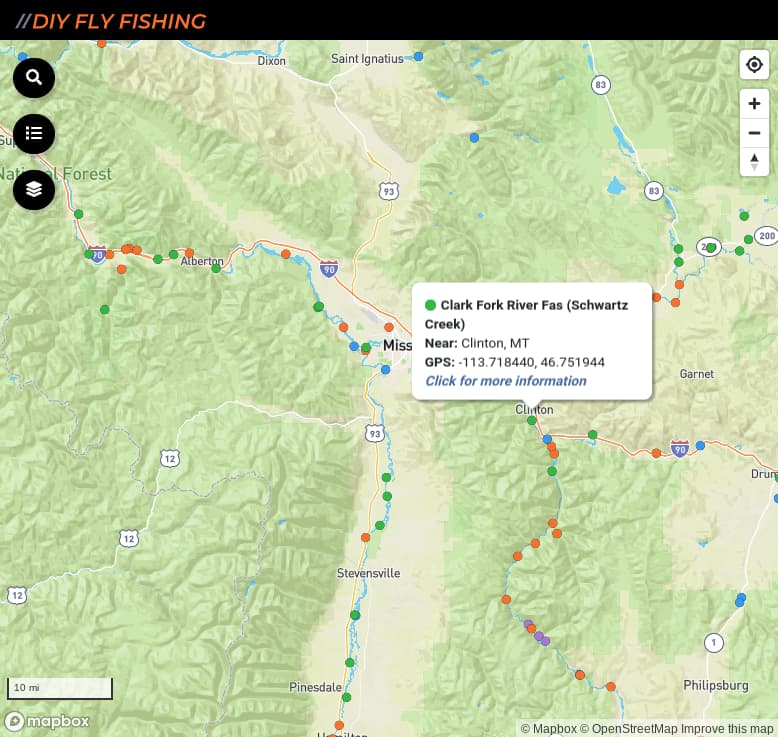 The location of the Clark is simple to describe, just look for I-90 on a map in Montana. The Clark basically parallels this interstate. The section that we will focus on runs from Clinton to Missoula, where both the Rock Creek and the Blackfoot River intersect with the Clark. This is one of the longest rivers in Montana, so bear in mind that fishing opportunities are not limited to this section.

There is a vast variety in the river’s width, depth, and neighboring land characteristics throughout its long journey. The section from Clinton to Missoula flows through mountainous terrain. You will find forests growing on the sides and tops of mountains, as well as growing right on the river's edge.

In other sections, the Clark takes on a short width and depth. Between Clinton and Missoula, it becomes wider and deeper. Wading becomes practically impossible, with the exception of the shallower portions. If you enjoy fly fishing riffles and runs, you will find them here.

With the intersections of the Rock Creek and Blackfoot River, the water temperatures run cooler. This is prime water conditions for rainbow and brown trout, as well as cutthroats.

Access to the Clark Fork River from Clinton to Missoula is good. You will find a good selection of public access points, as well as a complement of bridge crossings. These bridge crossings offer the angler “off the books” access points. They are considered to be informal.

For the fly fishing anglers who don’t mind a trek, there is an abandoned railroad that follows this river at various locations. By following these stretches, anglers can reach parts of the Clark for practical isolation from mankind. However, this comes at a risk. The risk is trespassing. While there is some question as to the land ownership along this abandoned railroad, bear this in mind if you adventure along it.

There are numerous stretches of the Clark where wade fishing is the preferred, if not the only, way to tackle the river. This is the case where the width and depth are conducive to this type of angling, as there are some stretches where the width is a mere 10-15 feet across.

This is not the case, for the most part, from Clinton to Missoula. As it grows in width and depth in this section, wading across the river (as previously mentioned) is not possible except for the shallower portions. If you decide to float this section, use caution and check with the local authorities prior to your departure.

In the city of Missoula, for example, the Clark splits into 2 channels. It is suggested that floaters, as of this writing, use the left channel to avoid a dam and portage. 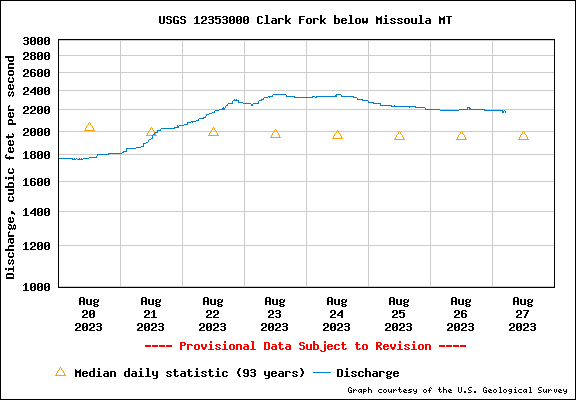 Making a decision on the best time to travel to the Clark Fork is difficult, and attempting to narrow it down for a suggestion is no easy task. However, after consultation with several locals, it seems the consensus is the fall months. The hopper fishing is active, with feeding pods of a couple dozen trout not out of the question.

In my conversation with one of the locals, he made mention of a hatch that is not commonly mentioned during the months of September and October, as they are not as widespread. These hatches are the Blue-wings and Mahoganies, typically in the early afternoon hours. Mahogany Duns in sizes 12-16 and Blue-wing Olives in sizes 16-18 are the hot tips I got from him.

There are two major hatches worth consideration. The first is a Salmonfly hatch, as this begins late in the month of May. Of importance to note when considering fly fishing this hatch is that spring runoff may cloud the water. If this is the case, your fishing trip will not have much “catching”. However, the river can run clear during this hatch, and the fishing is amazing with the clear water conditions.

The other major hatch worth noting occurs from the middle of June through July. This is when the Green and Brown Drake hatch gets going. Yet again, this will be dependent on the spring runoff, as water conditions can be favorable or unfavorable.

There are other fly fishing opportunities available on the Clark. Mid-July through September offers anglers hopper fishing. Additionally, the fall months offer the opportunity to catch nice size rainbows and browns while streamer fishing.

The fly fishing techniques that you will want to use are predicated on the time of year that your trip is scheduled. Let’s start with the Salmonfly hatch. If the water is clear, sizes 2-6 of the Kaufmanns Stone and Brooks Stone consistently bring in great results.

For the Green and Brown Drake hatch from the middle of June through July, a couple of reliable options exist to attract the brown and rainbow trout. For dry fly fishing, tie on sizes 12-16 of the Olive Sparkle Dun or Green Drake Emerger. For nymph fans, a size 12-16 of the Hare's Ear Nymph has yielded successful results.

If you find yourself enjoying this section of the Clark Fork River sometime between late June and July, you can also try Stonefly imitations. The Montana Nymph and Golden Stone Nymph in sizes 4-10 have brought anglers good sized trout.

Hopper fishing is something that every angler should experience. From mid-July through September, sizes 4-10 of standard hopper imitations have brought in good sized trout. Occasionally you may find the current of the Clark sucking the fly down. Simply apply a coat of floatant on the fly.

During the fall months, streamers have attracted many a large brown and rainbow trout. Toss them in holes, as well as other areas that are conducive to trout habitat.

A 9-foot 5-wt fly rod with floating line is perfect for fishing dry flies and small nymphs on the ABC River. For larger nymphs and streamers a 9-foot 6-wt with a sink tip fly line makes life easier. A tapered 9-foot leader, with tippet size 3X to 6X to match the flies you are throwing, is pretty standard.

There are a number of area fly shops and on-line retailers that publish Clark Fork River fishing reports. A few to check out are listed below.

One of the necessary “evils” if you will of traveling to another state for a fishing vacation is the necessity of purchasing an out of state fishing license. The Montana Fish, Wildlife, & Parks has a user friendly website to assist the angler in “getting legal” before the trip.

Traveling to this portion of Montana is easier than the more remote locations of other rivers. It bears repeating that the Clark runs parallel, in essence, to I-90. In fact, several portions of the river are so close in proximity to I-90 that anglers and recreational enthusiasts can hear the interstate traffic.

The city of Missoula has an international airport. This airport has been undergoing some renovations and expansions, so it would be worthwhile to check airfare flying directly into this city. Missoula is close to a 5 ½ hour drive from Billings, where Billings Logan International Airport is. This is the major hub of airline travel in the state of Montana, and often is where the cheapest airline fare can be found.

Lodging will not be a challenge, as there is a bevy of options in the city of Missoula. Given that this section is approximately 20 miles in length, travel to and from the Clark will be short.

Looking for more places to fish in Montana? Check our DIY Guide to the Best Fly Fishing in Montana

DIY Guide to Fly Fishing the Ruby River in Montana

DIY Guide to Fly Fishing the Missouri River in Montana

DIY Guide to Fly Fishing the Stillwater River in Montana