The Cache La Poudre is doubly distinguished among the many stretches of excellent fly fishing river to be found throughout Colorado.

First, it is the only river in the entire state to receive the designation of a “Wild and Scenic River” from the US National Park Service.

Second, it has not 1 but 2 separate sections that received the designation of Wild Trout Waters by the Colorado Division of Wildlife.

The river takes its name from an old local legend that goes back to the 1830s. A crew of explorers was making their way through the region to the Green when they found themselves beset by a blinding snowstorm along the banks of the river.

In order to get out of the bad weather, they were forced to “cache la poudre”, which is French for “hide the powder” so they could make their way out unencumbered by their heavy gunpowder kegs.

According to the legend, they returned in the spring to find their “cache” undisturbed, and recovered their abandoned cargo safe and sound. Others to visit the area heard the story, and the name Cache La Poudre stuck.

The Cache La Poudre River is best known for its catches of rainbows, browns, cutbows, and Greenback cutthroats, and there have been persistent rumors and reports of Kokanee caught from the river as well. 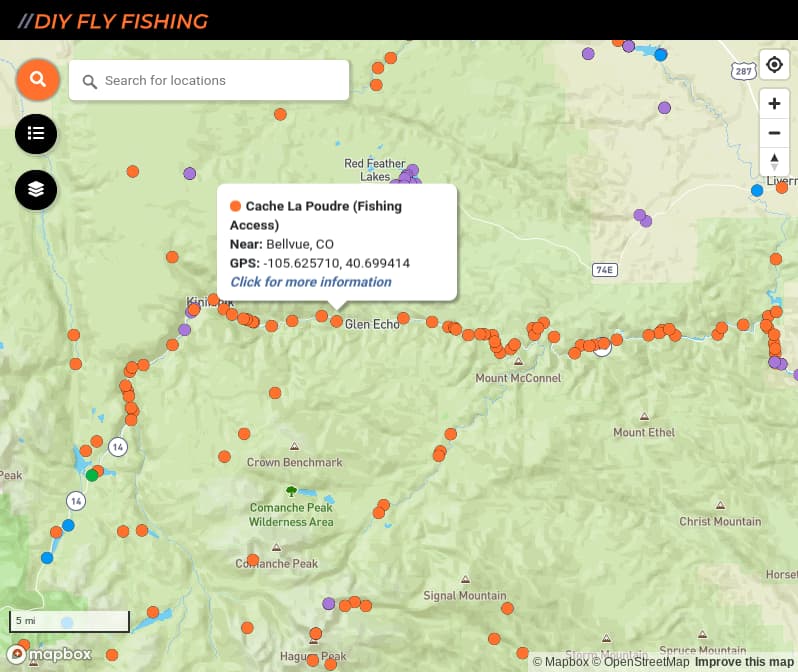 There are many points of access to the Cache La Poudre River (see map above), whose headwaters are up in Rocky Mountain National Park. You can hike your way up to them via Trail Ridge Road, and the Poudre Lake is on the way along the northern trail through the park itself and up into the Comanche Peak wilderness.

Highway 14 also offers numerous places you can hike or boat your way along the Cache La Poudre, and it also serves as the primary northbound route past Rocky Mountain National Park, forming the connecting route from Fort Collins to North Park.

As for the best fishing waters along the river, the closer you can get to the headwaters the better your fishing will be. There are numerous fast riffles, pockets, pools, and shady stretches where you can fish from the comfort of the river bank itself.

Be aware of special regulations that govern each area of the river, and know where you are before you start fishing. Keep in mind that the river isn’t just popular with anglers either: white water rafters, kayakers, and hikers frequent the waters and banks of Cache La Poudre too for the scenery and their own river adventures, too. 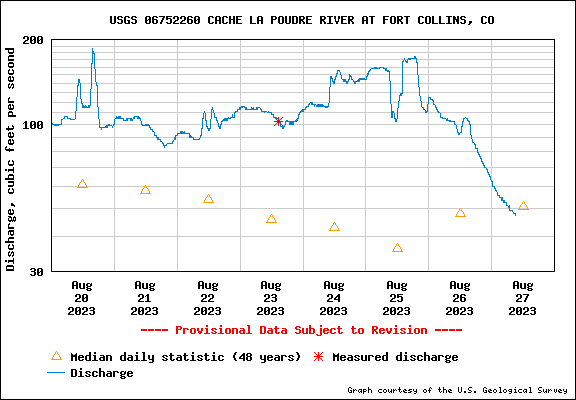 You can fish the Cache La Poudre year round, but the best seasons are late spring and early summer. Make sure you pack plenty of bug spray and a vast supply of patience though, as it is mostly two lane roads and summer traffic can get a little crazy.

Many people make their way to the river and nearby lakes for fun in the sun, though fishing traffic isn’t usually too bad. The most important thing to remember is to be aware of all the others visiting the area for their own purposes and recreation.

Also, if you are fishing in the winter months, you want to stay as far down river as possible for the best results. The waters are deeper there, and the fish spend the colder months further down away from the icy air.

It’s a good idea to pack a wide variety of flies depending on the season you are visiting the Cache La Poudre.

Winter and Spring hatches see midges and baetis flies, while summer waters are populated by stoneflies, caddis, and mayflies.

The arrival of fall sees more mayflies, midges, and caddis. A lot of anglers have good luck with terrestrials and streamers in the summer and fall, too.

Some of the best flies for the Cache La Poudre include:

A 9-foot 4-wt fly rod with floating line is perfect for fishing dry flies and small nymphs on the Cache La Poudre River.  A tapered 9-foot leader, with tippet size 3X to 5X to match the flies you are throwing, is pretty standard.

There are a number of area fly shops and on-line retailers that publish Cache La Poudre River fishing reports. A few to check out are listed below.

There are special fishing regulations governing different sections of the river though, so you want to familiarize yourself with the following:

Pingree Park Rd. Bridge to the western border of the Hombre Ranch

Colorado state fishing regulations as posted on the Division of Wildlife website govern the rest of the waters in the area. Make sure you know the rules where you plan to fish to avoid any incidents with the local fish and game authorities.

The Denver airport is about an hour drive from Fort Collins, and from there you can easily get to your campground or cabin near the Cache La Poudre River itself. Camping spaces can be reserved online, so be sure to book ahead if you plan on visiting during the busy spring and summer seasons.

There are also a lot of hunting and fishing cabins for rent all around Fort Collins, and don’t forget to check vacation rentals in the area for those surprise deals, especially during the slower fall and winter seasons.

Check out our DIY Guide to the Best Fly Fishing in Colorado.

DIY Guide to Fly Fishing the White River in Colorado

DIY Guide to Fly Fishing the Piedra River in Colorado