If you love angling for trout, there's a very good chance that you have heard of the Au Sable River in Michigan. It's by far one of the most famous trout waters in the world. The Au Sable River includes north, south, and east branches, each offering a different fishing experience.

As one of the best fisheries in the US, the Au Sable River is renowned for trophy brown trout, brook trout, rainbow trout, steelhead and salmon. This makes it one of the best fishing locations throughout the year, depending on what you want to catch.

Not only can you expect some amazing angling, but the river also offers beauty and serenity that you need to experience to understand. Read on to find out what you need to know about fly fishing on the Au Sable River in Michigan.

According to Michigan's Department of Natural Resources (DNR), the Au Sable River is a major tributary that drains into Lake Huron. The river drains a basin that covers over 1,932 square miles in the north-central lower part of Michigan.

One of the main reasons why the Au Sable River is so bountiful and famous for fishing is that it has around 476 miles of streams within its system. Most of which hold prime fishing waters. The river's mainstream flows for about 129 miles.

Fly fishing the 'Holy Waters' of the Au Sable River near Grayling, Michigan

There's a reason that the Au Sable is considered a paradise for trout. This stream offers up a bevy of brown trout, as well as brook trout and some rainbows. But anglers can also expect to run across steelhead and salmon during their spawning runs from Lake Huron.

The trout, salmon and steelhead are a mix of both wild and stocked fish depending where you are on the river.

The Au Sable River is located near Grayling and is a quick jaunt from the town. The river starts just north of Grayling and flows around 100 miles before ending up in Lake Huron. It's one of the top trout fishing destination in the United States.

The upper area of the river near Grayling receives water from the North, South, and East Branches, all of which are excellent trout streams. The Au Sable also offers an excellent salmon and steelhead fishery if you journey below Foote Dam in the last several miles of the river. 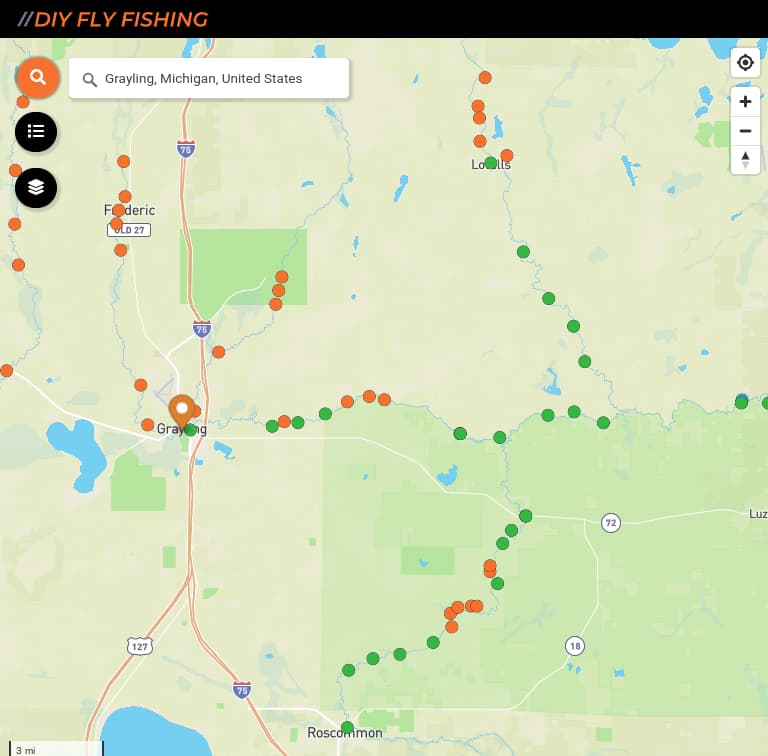 Because the Au Sable River covers so much ground and has so many branches, there are numerous access points and places along its banks where you can go fishing depending on what you want to catch.

Once the main river gets to Grayling, it's joined by the East Branch. Downstream from Grayling you will find a 9-mile-long section of the river that is strictly "fly fishing only - catch and release" called the Holy Waters.  The Holy Waters extends from Burton's Landing to Wakely Bridge.

From Wakeley Bridge to McMasters Bridge, brown trout are the most common catch. The river changes from a gravel bottom with small cobble to deep pools on a sandy bottom. Accessing this area can be done from White Pine Campground, Conner's Flat, and Rainbow Bend Campground.

If you don't mind the Special Regulations, you can easily access this section of the river through any one of the numerous alternatives. Those who prefer fish from a boat can launch from:

From there on, the big river gets much wider as you head downstream towards Mio Pond. This section has fewer runs and more pools offering excellent fishing. While it might be much deeper and more difficult to access for waders, it does hold a huge trout population and can be accessed via:

Around 30 miles below Grayling, anglers will find the trophy section of the river. It has a ton of large trout but is best fished using a drift boat.

For those looking to enjoy some drift boat fishing, heading downstream from Mio Dam towards Alcona Pond should be their next stop. Here you will find some of the largest trout that the river has to offer. You can access it via:

Both the south and north branches of the Au Sable are excellent for fishing. They are especially worthwhile if you prefer to wade fish.

These branches of the river are much easier to wade and offers excellent fishing for trout.

In general, the river can be accessed by all the major avenues of transportation in the state, including:

While there are a few areas within the river system that are difficult to access, the Au Sable River is generally quite accessible.

You can access all Michigan and Au Sable River fishing access points via the DIY Fly Fishing Map.

Like most excellent fisheries, when to go fly fishing on the Au Sable River depends on what fish you want to catch:

The best time of year to visit the Au Sable River is in the summer, but spring and early fall are also great options. Winter can offer up some catches, but the snow and cold make it best for those who want a real challenge. The river can also experience snow in the late fall, and early spring.

The Au Sable River has prolific insect hatches and you can expect excellent hatches during most months. However, beginning in March and April, you'll likely see BWOs, Caddis, Blue Quills, Red Quills, and Hendricksons.

As time passes into May, hatches of Grey Drakes, Brown Drakes, March Browns, and Sulfurs will be near the river. Additional hatches of Yellow Sallies, Hex, Light Cahills, Isonychia, and Stoneflies will show up in June.

Moving into July, other hatches like White Flies, Tricos, and Terrestrials will be available. This makes the Au Sable River an excellent option for fly fishing throughout most of spring and summer.

Be sure to check the stream conditions before heading out to fish the Au Sable River. The USGS stream gauge at Red Oak, MI provide a good indication of current conditions. 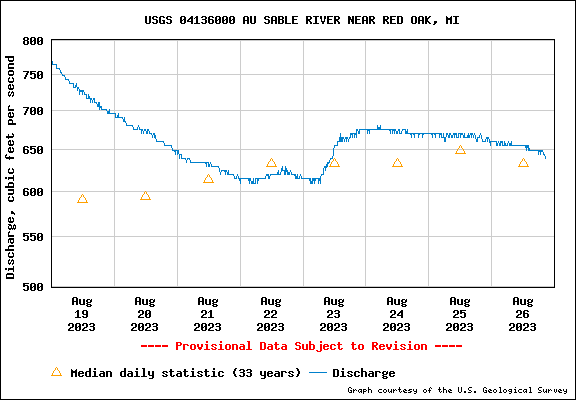 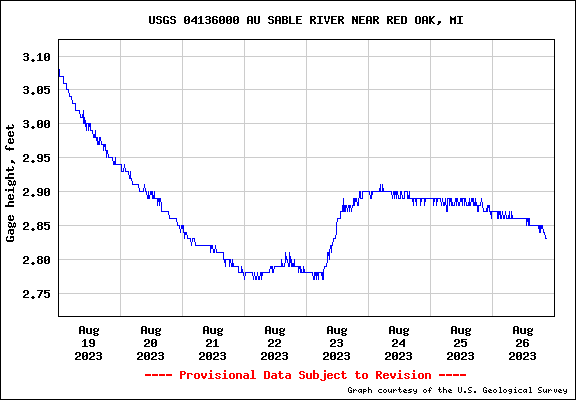 The Au Sable has many excellent hatches of mayflies, caddis and and stoneflies.  You'll want a good selection of dry flies, wet flies, nymphs, streamers and some egg patterns as well.

If you're headed to Au Sable River to catch trout, you'll want to be sure you bring along a variety of flies. Streamers in particular work well including white and brown sculpins, articulated streamers, and black and olive Matuka sculpins.

Those looking to hookup with a few steelhead will find luck with egg flies, streamers, and nymphs.  Overall, the fishing here is relaxing and easy, especially if you stick to the middle and upper sections of the river.

Here is list of general fly pattern recommendations for the Au Sable River:

A 9-foot 5-wt fly rod with floating line is perfect for fishing dry flies and small nymphs on the Au Sable River. A tapered 9-foot leader, with tippet size 3X to 5X to match the flies you are throwing, is pretty standard.

Area fly shops, guides and websites that can provide a Au Sable River fly fishing report and update on current conditions are listed below:

The closest major city to the Au Sable River is Flint, Michigan. It's about two hours away from Grayling and the other cities situated on the river. Anglers can fly in through Flint Bishop Airport and rent a car to make the rest of the journey.

Several hotels, restaurants, and fly fishing shops are located in the area to make stocking up a breeze.

If you prefer to drive, the river is accessible via Interstate Highway 75 and Highway 72, 33, 65, and 23. There are numerous gas stations and convenience stores along the way if you decide to stop over.

Being such a famous fishing river, you won't have trouble finding places to stay in the local towns or along the river itself.

DIY Guide to Fly Fishing the Betsie River in Michigan

DIY Guide to Fly Fishing the Maple River in Michigan

DIY Guide to Fly Fishing the Fox River in Michigan

DIY Guide to Fly Fishing the Grand River in Michigan