Since fly fishing is most closely associated with trout, and Alabama obviously doesn’t have waters that are cold enough to be hospitable to most trout for much of the year, you might be surprised to learn that fly fishing is actually quite alive and well in the Heart of Dixie. And, there are actually spots where you can fly fish for trout – you just have to know where to look.

Alabama is unique in that it doesn’t have any large, naturally occurring lakes. What it does have are plenty of bodies of water created by dams and other manmade means. Plus, the state boasts over 77,000 miles of rivers and streams, including the Tennessee, the Alabama, and the musically famed Chattahoochee. Not only is the one sixth of the state’s surface area water, but it’s also home to the most biodiverse freshwater species population of any state in the U.S. A whopping 38% of North American fish are Alabama natives! That’s pretty impressive, and bodes well for those who want to do a little angling down Dixie way.

So just where do you head if you’re planning a fly fishing trip in Alabama? 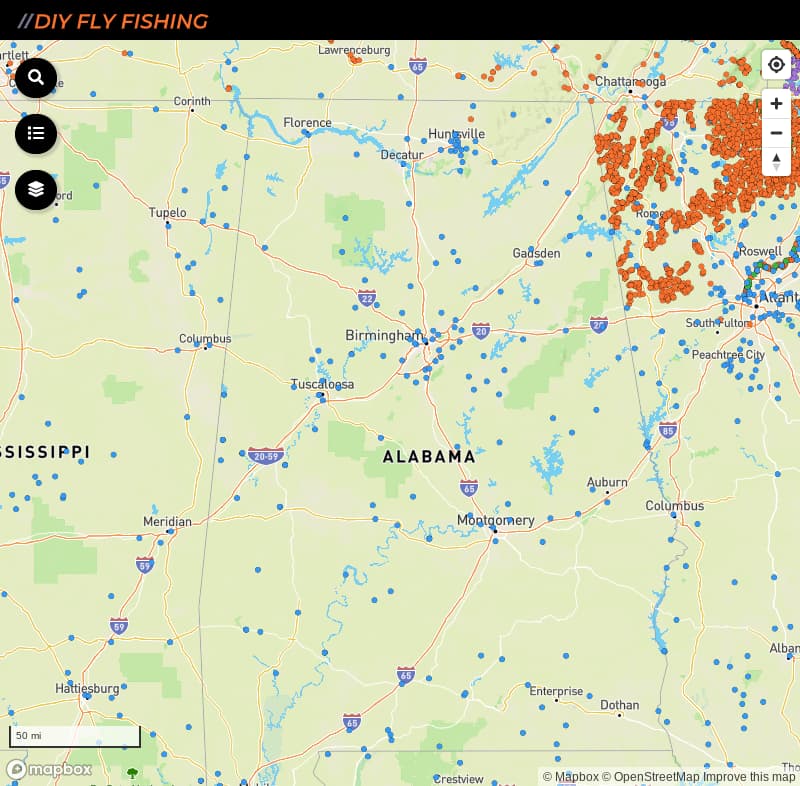 Best Spots to Fish in Alabama

Whether you’re itching to hook trout, bass, or pan fish, you’ll find something to satisfy your fishing urge in this beautiful state.

Up ‘round Jasper, in northwest Alabama, you’ll find an interesting story that has developed into a dream come true for southern anglers, particularly fly fishing enthusiasts. You see, the state’s warm waters cannot typically support a native trout population (the fish prefer temps below 75 degrees). So when the Lewis Smith Dam was built in 1961 in order to generate energy for the Alabama Power Company, officials began thinking about the potential for a fishery that could utilize the lake’s chilly waters. They started out by stocking rainbow trout in the lake itself, but that didn’t result in the success they’d hoped, so in 1974 they began stocking the tailrace instead – otherwise known as the Sipsey Fork of the Black Warrior River.

The tailrace has been stocked ever since, with the cooperation of Alabama Power, the U.S. Fish and Wildlife Service, and Dale Hollow National Fish Hatchery in Tennessee. The group works together to stock the tailrace with about 35,000 rainbow trout each year. While this did attract fishermen, and created an environment for the species which normally couldn’t survive in the state, problems remained. Access to the waterway was only available via difficult, muddy trails that discouraged people from actually making their way down to the banks of the two and a half mile run to engage in the sport.

In 2005, when the power company was in the process of renewing their hydroelectric license, public input was taken into account and the major subject of that input was how to make access better so that fishermen could actually get down to the water. The pleas were heard, and in 2010 walkways and staircases were installed, including handicap access for those with disabilities. Since that time popularity of the fishery has risen, but it’s still a place that could use some exposure.

If you’re seeking out some quality fly fishing in the steamy state, the Lewis Smith Dam tailrace is a great resource. Plus, you can keep up to five of the 8”-14” critters per day – and they make tasty eating to put on the family meal table. These fish can live up to a year or even more in the tailrace, growing to 18” and two pounds.

Tips for fishing Sipsey Fork – look for eddies, pools, and slack water areas adjacent to the current. These frequently house groups of trout seeking calm waters. Also, it’s crucial to remember that although the environment resembles your standard creek or small river, the tailrace is used as an outlet for water used in power generation and the levels can rise a dozen feet in a very short few minutes. A warning signal does sound ahead of time, so when you hear that it’s time to hightail it up the bank.

Travel far to the south of Jasper to Mobile Bay and you will find that fly fishing can net you some choice speckled trout, flounder, and redfish. During the spring, summer, and fall, baitfish, shrimp, and croakers abound in the inlet, attracting fat trout – up to five or six pounds – along with other fly fishing prey. You can also move up into the creeks and rivers that feed into the bay and have some good luck with your rod.

Travel south a spell from Huntsville (20 minutes or so) and you’ll happen upon Aldridge Creek Greenway. You shouldn’t have trouble finding a public access point along the Greenway. As the waterway flows toward the Tennessee River, it gets wider and wider. This humble little stream houses plenty of bluegill, perfect for a beginner because instant gratification is always a motivator, but it also holds a fair number of bass. If you find a spot at least a foot and a half deep you’ve got a good chance of landing a pounder. Locals say if you can find a storm drain, you’ll typically hit a gap underneath that houses a couple bass or so. Just be patient and fly slow.

Tucked away in the northwestern corner of the state is the Little River Canyon Wildlife Preserve. Little River Management Area is a part of this beautiful nature preserve and features access to the Little River, where you can cast your fly for bluegill, crappie, catfish, and bass.

Best Time to Fish in Alabama

Sipsey Fork/Lewis Smith Dam tailrace is open year-round, and since it’s stocked monthly – typically with over 3000 trout – there’s really no bad time to cast your line there. Even in summertime the waters remain in the low 60s. This fishery is the perfect getaway no matter the season.

Mobile Bay is most rewarding during spring, summer, and fall. During the winter the baitfish cannot survive the cold waters, thus must relocate to deeper, warmer places, resulting in the trout also vacating due to the lack of food. There is a rumor that the “ghost trout” of winter simply move up into the rivers and seek out deep pockets where the water remains warm enough for them to survive, meaning you could fish these locations by traditional methods. Winter fly fishing is known to be fruitless, however.

Public waters are open for fishing throughout the year.

As with any fly-fishing trip, you want your normal gear – waders, wading boots, a brimmed hat, a pack with accessories like nippers and forceps, and anything extra you’d like to have along.

If you’re hitting up the Lewis Smith fishery during the summertime, you’ll want breathable waders or just wet wade. The south can be brutally hot and humid in the warmer months, which means by the time you make the walk down to the water you may already be dripping with sweat inside your normal waders.

And don’t forget the bug spray – the south is packed with critters that can quickly turn your leisure time into an itchy misery.

Best Flies for Fishing in Alabama

Enticing the rainbows at Sipsey Fork/Lewis Smith Dam is a game of match the hatch. Caddis flies, mayflies, and midges may be hatching at any given time of the year at this waterway, which means you should come prepared for any eventuality. Stock your pack with nymphs, streamers, and poppers, and opt for a 4 to 5 weight rod. The leader should be 9 to 12 feet with about a 6X tippet.

For the bass at locations like Aldridge Creek, you can’t go wrong with a woolly bugger. For streams that are mucked up with aquatic vegetation, a bluegill popper will float at the surface. Another good choice is a San Juan worm – these do a good job of mimicking the prolific aquatic worm population in these warm streams. A 4 weight rod with a 7.5 foot leader is sufficient for these smaller waterways, as you won’t be encountering many game-size fish.

You must also have a valid Alabama fishing license. These are available through the Alabama Department of Conservation and Natural Resources, either online or in person.

Even though fly fishing is traditionally a northern pastime, the southern states like Alabama do a pretty good job providing some fun and interesting experiences for bug chuckers. You can’t beat year-round, well-stocked trout fishing with comfortable, easy stairway access, and with the abundance of creeks, streams, and rivers, you might even find yourself bringing home a bass or two.