Sure, it’s the state where the winds go sweeping down the plains…and it’s also the state with the highest number of artificially, dam-created lakes in the entire U.S., with Lake Texoma alone coming in at 88,000 square acres. On top of that, the Sooner State also boasts an astounding 167,000+ miles of streams and rivers. The infamous plains are cut through seemingly everywhere with expansive – and fish-packed – bodies of water.

Oklahoma loves its fly fishing. There are plenty of guided trips available in case you’re a first-timer and could use a little assistance in locating the best spots and honing your technique. But if you prefer to navigate the abundance of beautiful waters on your own, check out some of the best spots to practice your craft, and hopefully take home a little dinner. 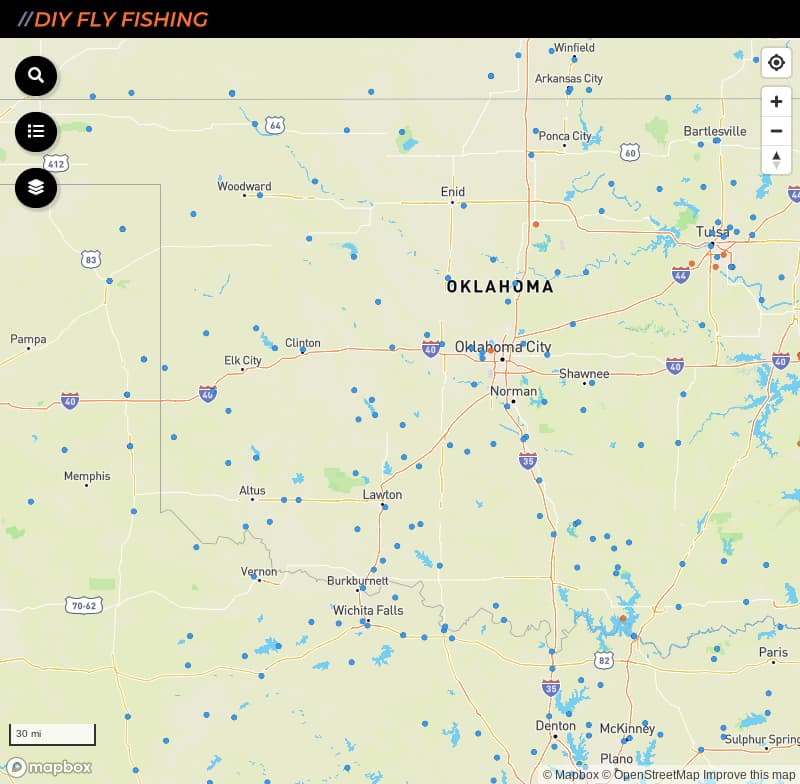 Best Places to Fish in Oklahoma

With dozens of sizeable lakes and an overwhelming amount of riverbank to choose from across the vast state, it can be difficult to know where to start. Since fly fishing is typically used for trout, we’ll start with the most prominent sources for this popular fish.

This branch of the Little River, which flows through west Arkansas into southeastern Oklahoma, is a 98-mile tributary dubbed Mountain Fork, and is part of the Mississippi River watershed. Sitting about 10 miles from Broken Bow and less than three hours from Little Rock, Arkansas, Dallas/Fort Worth, Texas, and Shreveport, Louisiana, this stocked tailwater is one of just two year-round Oklahoma trout fisheries. You’ll not only encounter rainbows and browns, but you might find a smallmouth bass or walleye from time to time as well.

There are plenty of public access points, including Beaver Lodge Nature Trail, Evening Hole Bridge, and Old Park Dam. The stretch measures about 12 miles – from the Broken Bow Reservoir to the U.S. 70 Bridge – and includes roughly five miles of banks inside the Beavers Bend State Park. Inside the park you’ll enjoy unlimited bank access, and you’ll find another at Presbyterian falls downstream.

The waterway is stocked year-round, and is divided into two zones – the blue zone and the red zone. The blue extends from the reservoir spillway to the Lost Creek diversion structure, skips over the red zone, and picks up again at the first State Highway 259A bridge to the State Park Dam. It then skips over another, larger red zone and runs from the mouth of the Rough Branch Creek to the U.S. 70 bridge.

In the blue zones there is a daily limit of six rainbow trout with no size limit, and use of bait and barbed hooks is allowed. In the red zones the rainbow limit is one per day with a 20-inch minimum, and no bait or barbed hooks may be used. Artificial lures and flies only.

Travel to the southwest and you’ll find the Blue River, another designated trout area, although this one is not stocked year-round (rather, from November through March). The 6.25-mile stretch runs through the Blue River Public Fishing and Hunting Area, which sits near Tishomingo on State Highway 78. Access isn’t a problem here either, as there is bank access and wading throughout, however keep in mind that the northern part of the water is catch and release only from November through February. With its clear waters, banks lined with trees and lush foliage, and little waterfalls accenting the flow of water, you’ll be hooked.

The second of two year-round trout fisheries, the Lower Illinois is a favorite among locals. This stunning display of sparkling waters surrounded by the greenery, rocks, and trees that nature does so well encompasses a 7.75-mile stretch from the Tenkiller Ferry Dam to the U.S. 64 bridge. Located between Broken Arrow and Fort Smith, the trout haven features nearly one mile of access within the Simp and Helen Watts Management Unit, and four additional public access sites at points along the waterway.

The key to fly fishing, particularly with trout, is to match the hatch. This means your fly should be as close as humanly possible to the real insects and other prey that the fish normally eat. Some possible hatches in these popular Oklahoma fly fishing areas:

Observation is key. Oklahoma is a big state, and populations may vary in species depending upon what area and what season you’re fishing.

Best Time to Fish in Oklahoma

The Lower Mountain Fork and Lower Illinois can be fished year-round. Fall through spring are generally the best times for other trout locations, as well as bass as they go dormant in the winter.

Interestingly enough, winter fly fishing in Oklahoma has gotten a bit of attention recently in cyberspace. Aside from the two year-round locations, you can also try out Robber’s Cave State Park, Roman Nose State Park, and Black Mesa State Park, which are all reportedly stocked with rainbow trout during the colder months. Yes, it’s cold, but you won’t be fighting as many vacationing anglers to get a good spot – this alone may result in you taking home an entire week’s worth of meals. You can also sleep in because the fish usually do in the cold weather as well. It can take them until as late as 11am to get up and moving about!

Oklahoma is a fairly temperate climate, so typical clothing and gear will suffice for spring, summer, and fall. You’ll of course want your boots, waders, a hat that shields your face from the sun, insect repellant, and during seasonal cusps you’ll want to dress in layers just in case you find yourself freezing in the morning chill and roasting in the afternoon sun.

For winter fly fishing in Oklahoma, you’ll want to have gloves, a balaclava depending on the temp, and don’t overdo it with the socks. Waders are already pretty warm, and restricting your feet too much can actually interfere with circulation, thus reducing warmth rather than raising it.

For the Lower Mountain Fork River, experts recommend about a 9 foot leader on a 5 weight rod with a 5X tippet (in winter, when the water is calmer and it’s tougher to hide your gear from the fish, you can bring it down a size). March browns, pheasant tails, and zebra midges are solid choices, although you’ll want to have some backup options just in case. Caddis, nymphs, eggs, and streamers are always good to keep in your kit.

According to one Oklahoma fly fishing instructor, there are some specific flies that you should always have when you’re fishing in the Sooner State.

If you’ve got access to a boat, bring that too. Lower Mountain Fork River and the Lower Illinois both offer convenient boat launch access, so you might as well take advantage of it.

Don’t forget the license – residents 18-64 will pay $25 for a yearly fishing license from the Oklahoma Department of Wildlife Conservation, while non-residents pay $55. There are two-day and five-year options, as well as a combo hunting/fishing option. Youths 16-17 pay $5 for a fishing license.

You could spend ten years in Oklahoma and never fish all of its many waters, but at least these well-stocked, popular fly fishing destinations give you a solid start on where to get your feet wet.