DIY Guide to Fly Fishing the Ocqueoc River in Michigan

The Ocqueoc River may not be the best-known river in Michigan due to the many other streams in the area. However, it isn’t a river that a true angler should overlook on a quest for salmon and steelhead. The locals know how great the fishing is at the river and those from out of town should have that same chance.

This river is home to the only named waterfall in the lower peninsula of the state, Ocqueoc Falls. It also happens to house a huge number of brookies, rainbows, browns, and migrating salmon and steelhead. This might be a hidden gem, but it’s one most anglers should visit at least once.

Salmon run in October on the Ocqueoc River in Presque Isle County, Michigan

The Ocqueoc River is located near Alpena and has a wide variety of fish for anglers. Some of the most common include rainbow trout, smallmouth bass, and Chinook salmon. While fishing the river, it offers a truly rustic feel due to its largely rural location.

While the river is only one waterway, it has three different sections to be aware of. The origin of the river is found a few miles away from Millersburg, where the largest number of fish can be caught. A chain of lakes and several dams are located in the upper reaches to create a warm water fishery.

Somewhere between the upper and lower sections of the river, it takes a 30-mile diversion to Lake Huron. The water moves over limestone bedrock and rock outcroppings which speeds things up quite a bit. This is where you will find Ocqueoc Falls and begin to see a variety of trout. The atmosphere is peaceful and the location is beautiful. In addition to fish, anglers can also expect to see all sorts of wildlife.

This is largely based on the cooler water as several tributaries come into the river, including Silver Creek and Little Ocqueoc River, both of which are teeming with trout. Next, the river moves toward Ocqueoc Lake, where it receives much more water from tributaries that empty in the west and south. In the spring, lake levels can vary by as much as three feet due to the single outlet at Lake Huron.

The final part of the Ocqueoc River is found near US #23 and it has a different appearance than the other sections. There are large sandy banks that resemble dunes and sharp bends where fish can be found. Remediation efforts have improved the state of the river and made it a destination for anyone who enjoys a spot of fly fishing. 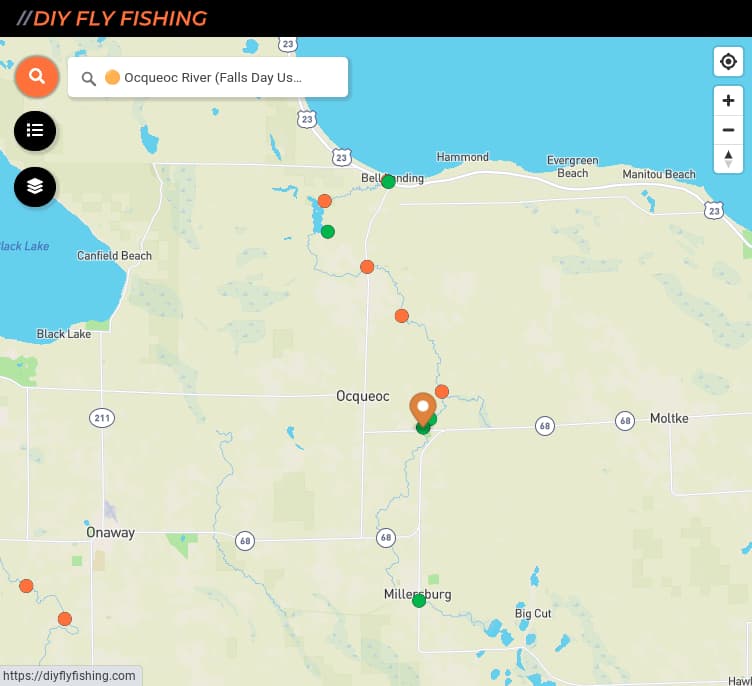 If you ask the locals, the best spot for fishing the Ocqueoc River is at Ocqueoc Lake Road. It crosses over the river at the outlet of Ocqueoc Lake just over 10 miles northwest of the town of Rogers City. There is plenty of parking for vehicles, but many anglers choose to park on the side of the road and head right down to the river.

One thing to be aware of when choosing this access point is that an electrical sea lamprey barrier is downstream of the road. Therefore, anglers who want to catch a few fish should make sure to do so no closer than 100 feet away from the weir.

The river is open all the way from Lake Huron to Barnhart Lake, but the best fishing is typically in the middle reaches. If you’re spending time at the lake, head to the south end to find a dirt access ramp with several parking spots.

Another access point is just off of Highway 23, which parallels the river’s coast between Cheboygan and Rogers City. Just south of the bridge is a parking area, a public launch site, and a small store. This area offers several wading and bank fishing spots at a short distance from the bridge.

For those who are after trout, this river is slightly different than many others in this part of Michigan. Ocqueoc River has fairly warm waters in the summer so trout aren’t as prevalent as they might be at other streams. However, in the spring there is a large steelhead run with fish that can weigh up to 12 pounds.

While several Michigan rivers are great for fishing in winter, the Ocqueoc River is not one of them. This river tends to be prone to freezing, so ensure the temperatures aren’t too low if you want to go after trout once winter comes calling.

Otherwise, regular fish-catching seasons will apply. Trout will be the most lively and ready to bite in spring and fall since aquatic insect hatches and spawning occur at those times. The water at the Ocqueoc River is also cooler during these seasons, making the fish more likely to pay attention.

As far as time of day goes, the best catches tend to be from late morning into early afternoon. However, great catches have also been seen in the 3 to 6 p.m. period. Therefore, night and early morning fishing might require a bit more patience when it comes to waiting for bites.

Be sure to check the stream conditions before heading out to fish the Ocqueoc River. Unfortunately, the USGS stream gauge near Ocqueoc, MI is no longer operable.

Best bet is check with a local fly shop or outfitter to check on current conditions.

The best flies to use on the Ocqueoc River include Little Black Caddis, Blue Winged Olive, Terrestrials, and Tricos. The season dictates when the hatches are present. For instance, streamers are effective during all seasons, while White Flies hatch only in September.

Imitation streamers are a good option and many of them work well at the river. Consider a BH Woolly Bugger, Black Nose Dace, Bunny Leech, or a Conehead Marabou Muddler for great results.

Here is list of general fly pattern recommendations for the Ocqueoc River:

A 9-foot 5-wt fly rod and matching fly reel with floating line is perfect for fishing for trout on the Ocqueoc River. A tapered 9-foot leader, with tippet size 3X to 5X to match the flies you are throwing, is pretty standard.

You'll want to step up to a seven- or eight-wt fly rod for steelhead, salmon and lake-run brown trout.

Area fly shops, guides and websites that can provide an Ocqueoc River fly fishing report and update on current conditions are listed below:

The Ocqueoc River from its source in Barnhart Lakes downstream to Lake Huron is a designated Type 4 trout stream. Please refer to the Inland Trout and Salmon Stream Regulations in the current Michigan Fishing Guide.

There are several tackle shops near the river, whether in the lower or upper reaches. The towns in the area also offer lodging, dining, and shopping destinations to meet all your needs while spending time in Michigan.

DIY Guide to Fly Fishing the Platte River in Michigan

DIY Guide to Fly Fishing the Pine River in Michigan

DIY Guide to Fly Fishing the White River in Michigan