New Hampshire may be small, but it’s large on nature. The Granite State doesn’t just contain a ton of the hard stone, it also offers anglers a variety of beautiful scenery and amazing waters in which to cast their lines. Indeed the state fish is the brook trout, and NH has plenty of them, wild and stocked. The following advice on locations, the best time of year to go, what you’ll need when you fish NH waters, and even which flies to take along should get you started on your New Hampshire fly fishing adventure. 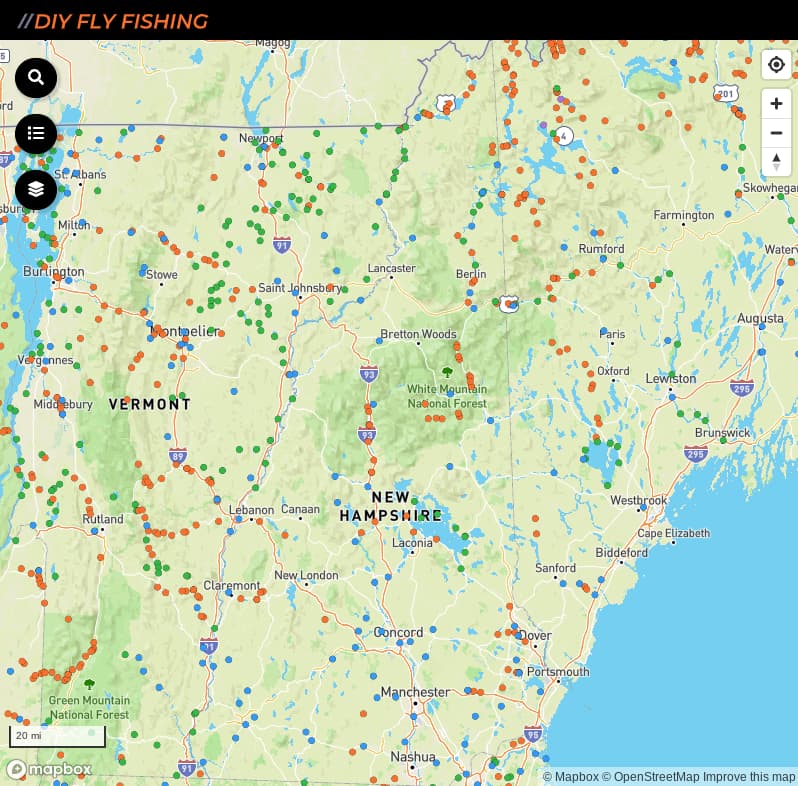 Thousands of miles of rivers and streams, and nearly a thousand lakes make it hard to know where to start on your New Hampshire fly fishing journey. Add to that the fact that the Department of Fish and Game stocks almost a million trout annually, and you’ve got a fly fisherman’s paradise that can be overwhelming to sort out. Don’t worry – just grab your rod and head for one of these reputable angling spots.

53 miles of this scenic waterway flow through the state, from Lake Umbagog in Errol, down through the southeastern portion of the state until it finally begins to move into Maine. You’ll find everything from swift rapids to slow drifts in these waters, along with brookies, browns, rainbows, and even landlocked salmon. Some parts are wadeable, but you’ll have better luck in a canoe or drift boat.

Originating at Saco Lake, this freestone stream flows from Crawford Notch through North Conway. After that, the sparkling clear waters babble over sand and log jams. These waters are well known for their hefty browns, with 20+ inchers a common occurrence. The river is stocked with brookies, browns, and rainbows, and is typically wadeable due to the low waters. If you want to float, make sure it’s right after a rain.

There are some special regulations for the Saco – the area from Lucy Brook to the Artist Falls Brook confluence is designated fly fishing only and carries a daily limit of two for brook trout. The area from Crawford Notch State Park Dam upstream to Willey Pond is designated for youth anglers, age 12 and under only.Access points for Saco River include Humphry’s Ledge on Westside Road, the covered bridge in Conway, and the first bridge in North Conway.

The Department of Fish and Game provides a list of trout streams that are stocked, and open to anglers for the entire year. These include:

Other Locations worth Checking Out

Sugar River – this south-central waterway is supplied by the chilly waters of Lake Sunapee, which contains salmon, trout, and smallmouth bass. There is a breathtaking fly fishing only section in Newport that offers scenery as good as the fishing.

Pemigewasset River – originating in the White Mountains, this central-NH river offers good trout and smallmouth bass fishing year-round. The North Woodstock area is particularly hospitable to trout, and for salmon, a good drift boat outing is in order.

Beards Brook in Hillsborough – this little stream is a North Branch River tributary and is situated just off of the Route 9/Route 202 junction, on Beard Road. Bring a spinner or a smaller fly rod for this little trout fishing expedition.

Don’t forget the Bluefin tuna and striped bass that beckon from the state’s 18 miles of Atlantic coastline, as well as in the estuary waters. Some great locales include:

You certainly can fish the coastline, but you’ll want to use extreme caution. The rocky terrain can be treacherous, making it wise to take along a fishing buddy and wear cleated boots. There are plenty of points along Route 1A that you can try out, so long as you know what you’re getting into.

As long as you remain within the confines of the state’s fishing season laws, there’s really no bad time to fly fish New Hampshire. The Saco can be a bit tied up with “rubber hatches” (tubes and canoes) during the hottest months of the summer, but closer to spring and fall are you best bet for trout anyway.

The best time to fly fish the Androscoggin is from mid-May to June, and then again from September to October once the water temperature has cooled a bit.

As fly fishermen know, success is – in large part – about matching the hatch. Some hatches to know about include:

On the Androscoggin specifically – use olive woolly buggers in winter, as well as stoneflies, sculpins, or grey ghost streamers. In the spring you’ll want to stick to #10 or smaller hare’s ears or pheasant tails, or white and olive woolly buggers. Summertime brings a need for dry flies like stimulators, or you can try a stonefly nymph subsurface. Streamers are good for fall, as are blue-winged olive imitators.

Bring your waders, a wide-brim hat, rain jacket, polarized sunglasses, a vest or pack, a first aid kit, and nippers and other basic accessories.

Any person age 16 or above will also need to have a fishing license from the New Hampshire Department of Fish and Game. Residents may purchase a freshwater license for $45, while non-residents will pay $63. Seniors get a discount on their license. Non-residents have the option of purchasing a one-day, three-day, or seven-day fishing license, for the cost of $15, $28, and $35 respectively, while residents may purchase a one-day fishing permit for $10.

In order to fish in coastal or estuary saltwaters, you must purchase a recreational saltwater fishing license. The cost is the same for residents and non-residents, at $11. The great thing about the saltwater license is that it entitles you to fish in the coastal and estuary waters along the Massachusetts and Maine coasts as well as NH.

There are various regulations governing the fishing of New Hampshire waters, based upon fish type and body of water. The state maintains a fairly comprehensive website with information on their fisheries management, fish species, trout stocking, fishing locations, along with a slew of other useful information to anyone looking to practice wildlife sport in the state.

The entire New England coast is a picturesque visage worthy of seeing even if you don’t like to fish. But if you do, New Hampshire will definitely keep you on your toes, with rivers, streams, and lakes packed with trout and other game fish, and scenery that is among the most stunning in the whole country. Pack up a rod or two and hit the road for a fly fishing trip to New Hampshire.