The North Star State is a wonderland of water activities. In this vast Midwestern landscape, you will find over 5,000 lakes that house game fish, and 15,000 miles of streams and rivers.

In fact, fishing is such a beloved pastime in the state that the DNR offers a workshop specifically for women, and the state boasts an organization made up solely of fly fisherwomen.

It is a vast, friendly state that embraces its natural recreation offerings and offers sportsman a glut of advice and information, online and otherwise. 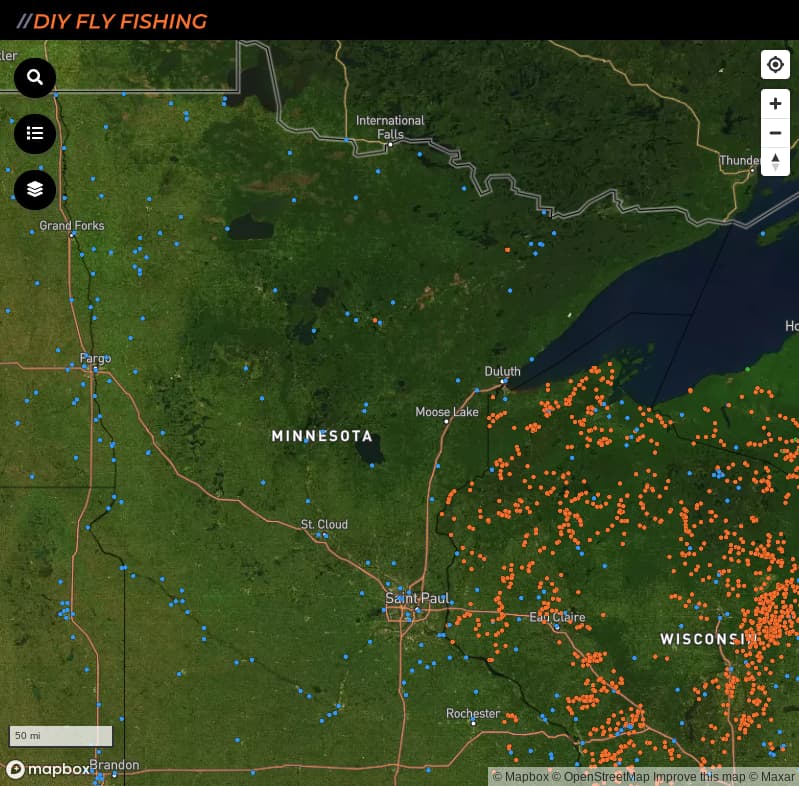 Best Spots to Fish in Minnesota

With so many bodies of water, where does one even begin? Let’s start with a few of Minnesota’s reportedly best fly fishing spots.

South Branch of the Root River

Located in the far southeastern corner of the state, this lower portion of the 80-mile long Root River is unique in that it houses a mixture of stream-bred wild brown trout, wild and factory-raised brook trout, and stocked rainbows. The limestone makes for a higher pH level, and the water is largely comprised of rain and melted snow. You’ll find the best access above Preston, in the three miles of public waterfront at Forestville State Park. There are other access points at bridges, but the park is the main public location.

The stream is mostly made up of long pools and slow riffles, though you will encounter a run here and there. There are plenty of fish to go around if you play your cards right. Browns tend to shelter under the shade of the banks on outside bends, and favor tree limbs and deadfalls. Seek out swift runs for rainbows and smaller browns.

As for the hatches, this area plays host to a healthy selection of aquatic insects and terrestrials, giving you a variety of imitations to choose from depending on the season. The pastoral scenery and easy-to-wade waters make this a delightful destination for the experienced and novice fly fisherman alike.

Travel a bit to the northwest and you’ll hit Trout Run Creek, which sits nestled in the prairie region and runs for 12 miles before hitting the North Branch of the Root River. Enjoy the hardwoods and peaceful meadows surround the stream, as you take advantage of the many improvements which have enhanced the fishing experience of these waters. In fact, legend has it that Trout Run may house a trout population as dense as 2,000 – 4,000 per mile!

While many of the area’s spring creeks flow smoothly, Trout Run is a bit of a rebel with its riffles and runs. This is to your advantage, as the tumultuous surface serves as camouflage, preventing the trout from detecting your activities. Along with fishing in the faster sections of the creek, rain can also help your cause by muddying the water. You’ll find both wild and stocked browns and brookies at Trout Run.

Fly Fishing in the Twin Cities

The Minnesota DNR is a goldmine of fly fishing information. They provide a comprehensive list of metro area Twin Cities fly fishing sites, along with the types of fish you’ll find and what to use to catch them. Some of these locales include:

There are many more l﻿﻿ake﻿﻿s listed, as well as additional resources from the DNR – even including a complete guide to rods, flies, lines, casting techniques, virtually everything a beginner needs to know.

Despite its deceptive name, this small river is not a playground for whitewater rafting. Rather it is a compilation of three branches that flow out of the prairie region. It is also a Mississippi River tributary. Surrounded by heavy vegetation, and some cottonwood and aspen trees, the waters offer riffles and slow runs, with the occasional trout-packed deep pool. You’ll find some wild, and mostly stocked, browns, rainbows, and brooks. With a gravel and sand bottom that offers plenty of even enough areas for fly adjustment, it’s a great location for both nymph and dry fly fishing.

As for access, you won’t have a problem at the Whitewater. Not only does it pass through a large wildlife management area, but it also flows through two state parks, making public access points plentiful. You can also fish along public easements. Again, the Minnesota DNR is a fantastic resource for specifics on all things Minnesota fly fishing.

For the bug chucker who’s angling for a challenge, this 60-mile length contains designated trout sections which are catch and release areas, except for one stretch in Farmington. There are public access areas on County Road 66, as well as at the Farmington city park. The river contains both wild and stocked browns and brooks.

While these can vary according to location, the most common are as follows:

Also take crane flies into consideration – imitations can be useful from June to September. Grasshoppers, ants, and beetles are also effective in summertime, along grassy banks and under tree overhangs.

Best Time to Fish in Minnesota

In general late spring is the most lucrative for fishing the streams. During the hottest part of the summer you probably won’t have much luck on the lower portions of the Root River, while fall is a great time because of Trico hatches and spawning of browns. Fall is a lively time to fly fish Trout Run Creek, and even in winter as the water only freezes in limited areas. The Whitewater River yields best in fall, though the upper sections are still fairly good throughout summer. Spring can be okay, as long as the water doesn’t rise too high.

When planning your trip, you’ll need to take a comprehensive look at the rules and regulations on the Minnesota DNR website, particularly if you want to keep your catch. The state maintains extremely detailed rules for each species, including size and possession limits, catch and release, and timing for various fish.

You’ll want a standard set of gear, of course, including as much of the following list as you can reasonably carry:

As for fishing equipment, you’ll want an array of choices so that you’ll have a variety on hand depending upon the available fish and their size.

Best Flies for Fishing in Minnesota

The amazing selection of fish means you’ll want to equip yourself with a boatload of fly choices. Keep streamers on-hand for the bigger browns – sculpin, minnows, leeches, and baitfish are ideal, particularly in dingy waters.

Also bring along foam flies, nymphs, bass poppers, pheasant tails, and woolly buggers. Fly fishing devotees swear you can catch anything with the right fly, so you want to be prepared for the wonderfully diverse fish population that Minnesota’s thousands of miles of water have to offer.

There is also a separate trout and salmon stamp, as well as a walleye stamp, that give you permission to fish in designated trout streams and lakes. Exceptions are children under 18 and people over 65. Compared to some other states, Minnesota has extensive, complex guidelines for seasons and licenses. The good thing is that they’ve laid everything out in an easy-to-read, easy-to-understand online brochure.

Fly Fishing in Minnesota is a Not to be Missed

Minnesota is a wonderland of water, and a thriving, vibrant fly fishing community.

Between the thousands of lakes, streams, rivers, and creeks, the educational clinics offered by the Minnesota DNR, and the prolific trout population that extends throughout the state, there’s no shortage of excitement for anglers.

Add to that the serene landscapes, peaceful farms, and prairies that lay claim to rivers and creeks, and you’ve got a fly fisherman’s vacation paradise.