Aside from its rich historical significance in the formation of the United States, Massachusetts also brings to mind the powerful Kennedy family, and of course, Beantown. A trip to The Bay State could include visits to prominent historical landmarks and a trip to the pure, unsullied beaches of the coast, but it also offers fly fishermen quite a few fun and interesting options for casting a line.

Everyone knows that the state provides convenient access to the Atlantic Ocean, but it also boasts 4200+ miles of rivers as well as more than 1100 lakes. These waters hold over 80 species of fish, from the native brook trout to rainbows and browns, to largemouth and smallmouth bass, as well as Atlantic salmon and yellow perch. Whether you want to try your hand at some ocean dwellers or go the traditional route of the trout stream, there are plenty of exciting fly fishing opportunities in Massachusetts. 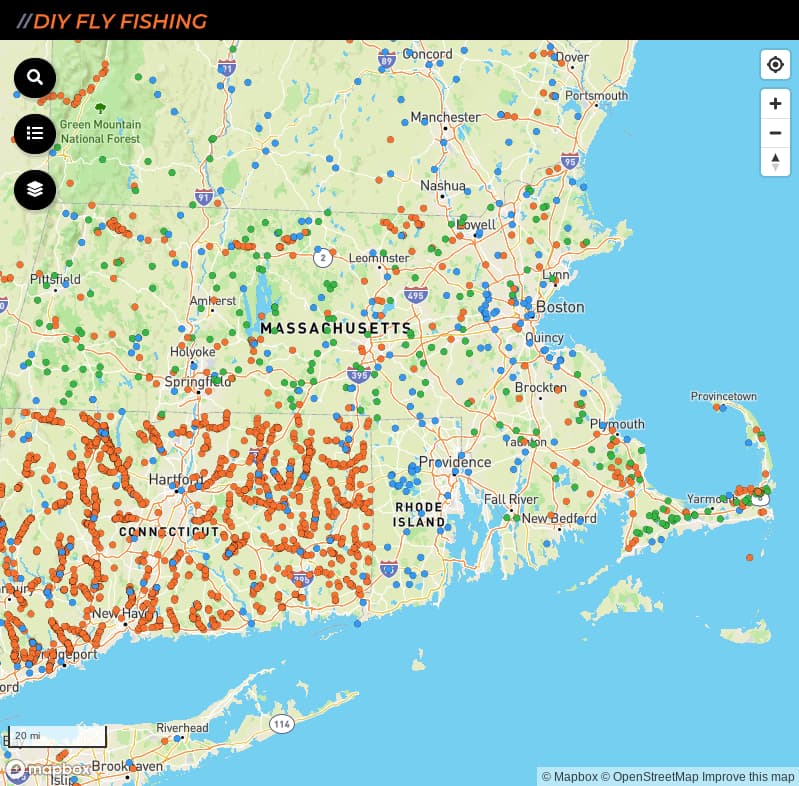 Best Places to Fish in Massachusetts

The Commonwealth makes sure that residents and visitors alike have an abundance of angling options throughout the year. The Division of Fisheries and Wildlife stocks the state’s rivers, lakes, and streams with roughly half a million trout annually, with one deposit in spring and one in the fall. They stock brookies, browns, rainbows, and tigers, giving fishermen of all ages a great recreational activity in which to engage throughout most of the year.

There are a few standouts among the dozens of potential fishing locations, so grab a rod and choose from these favorites.

This little-known gem of the northwestern Massachusetts hills contains the nice chilly water that trout require to thrive, due to water supplied from dams upriver. In the upper portion – between Fife Brook Dam and the Number 4 Dam – you’ll find 17 miles of swift riffles and pools harboring sizable browns, rainbows, and brookies. The lower portion features browns and rainbows, as well as walleye and smallmouth bass.

There are two designated catch-and-release stretches on this waterway – from the Fife Brook Dam to the Hoosic Tunnel, and in the lower part of the river, from Pelham Brook to Mohawk Campground. These areas are chock full of trout, although the rest of the river is also rewarding in terms of fish density, with ample stock and holdovers as well.

You can float this river – from the Vermont border to where it meets up with the Connecticut River – throughout the spring through fall, however due to the whitewaters, it should only be done by experienced river runners. There are plenty of areas to wade in as well, particularly during low water.

Route 5 in Deerfield offers good access, at the Rainbow Pool and the Stillwater Bridge. There is parking available as well as canoe launch sites. Conway’s Bardwells Ferry Bridge is a good choice as well, with deep pools that give shelter to bigger fish.

The important thing to keep in mind when fly fishing the Deerfield River is that there is approximately one dam per seven miles. This means water flows can happen swiftly and unpredictably, so you must be prepared to move if necessary. Check the flow schedules so you can plan your trip as best as possible. Even with the water levels changing between high and low, the fishing is outstanding, and you can work the low levels to your advantage to access the river on foot.

Nestled within the Squannacook River Wildlife Management Area is a stretch of waterway harboring hefty browns and brookies. Between Vose Dam and Harbor Pond, access is simple and the banks are state-owned. Another area called Black Rock is known for trophy trout and impressive hatches. The only catch is the lengthy hike it takes to reach it, but the area (so-called due an imposing boulder overhang) is known as one of the best trout spots the Squannacook has to offer.

This well-known area begins in Marshfield and swings down and around, coming to a head at Provincetown. While a variety of fish species are known to migrate through the area, including Bluefin tuna and bluefish, but the coup de grace sought by most fly fisherman is the highly prized striped bass. There are numerous shore fishing opportunities along the bay, including jetty and beach locations. These include:

There are countless spots along the bay at which to stop and cast a line. A couple things to remember when fly fishing Cape Cod Bay – if you shore fish on the beach, don’t overdo your casting distance. Check for the edges of troughs about 10-20 feet into the water, and cast there. If you’re in a boat, take advantage of the fact that stripers can often be hooked in the pockets of jetties as they forage for food.

This tributary to the Quabbin offers not only a fabulously secluded, wilderness atmosphere, but it contains wild brookies as well as stocked trout and landlocked salmon. The West Branch lies along Route 202 near Shutesbury and New Salem. There are sections with specific regulations so be sure to check the state laws before fishing there.

Best Time to Fish in Massachusetts

The Deerfield is a year-round river, with the most productive times occurring April through December. Throughout the entire year you can catch on nymphs, dry flies, or streamers. The challenge during the prime summer months on the Deerfield is that there are numerous kayak, canoe, and tube hatches. During this time it’s best to seek out areas that aren’t easily accessible by boat in order to enjoy more relaxing angling.

On Cape Cod Bay the striped bass come out strongest in May. As the water temperatures warm up throughout the summer you’ll want to go out earlier in the morning while the water is cooler.

The Massachusetts fishing seasons vary, with most waterways hosting year-round angling. Some rivers and streams have seasons of April through September, and September through March, so you’ll need to check the regulations to make sure you adhere to the law.

Aside from the usual – waders, polarized sunglasses (these allow you to see schools of fish under the water more easily), a wide-brimmed hat, rain jacket, and pack or vest to hold personal items. In addition, it’s a good idea to bring a collapsible wading staff and spiked, felt-bottom boots, particularly for the Deerfield river, which has some tricky terrain and slick spots.

For the typical trout streams like the Deerfield and West Branch, the usual trout rig will do – a 4-6 weight rod with 5X or 6X tippet with a 9-foot leader.

On Cape Cod Bay you’re dealing with a totally different animal – saltwater requires a much heavier rod, so go for a 9-foot 9 weight with a 9-foot leader and 16 lb. saltwater tippet.

The Deerfield River requires patterns like the pheasant tail, ants, nymphs, sculpins, eggs, and parachutes. You might even want to toss some San Juan worms in your box just for fun.

Massachusetts offers both freshwater and saltwater fishing licenses. People age 15 and over require a freshwater fishing permit, available at the cost of $27.50 for residents and $37.50 for non-residents. People between ages 15 and 17, as well as those age 70 and over may obtain a freshwater permit for free. Those 16 and up must have a permit to fish in saltwater – this permit runs $10 for residents and non-residents, and is free to those age 60 and up. While the permits are free for seniors, you may be charged a small processing fee to purchase your fishing license online.

Massachusetts is one of the few states that offers the exciting opportunity to fish in both inland freshwater as well as the saltwater of the Atlantic Ocean. Given that the state is home to so many other wonderful sights and tourist destinations, it makes the ideal location for the fly fisherman who may want to engage in some other activities in between angling adventures.

The variety and culture throughout this little powerhouse state allow you to stay entertained even if your stay includes a rainy day or two. Book a charter boat or just wander the bay exploring the beaches and ports on your own, discovering all the rewarding natural treasures this state has to offer.