As part of the Snake River drainage in the southern reaches of Yellowstone National Park, the Lewis River is a fishery that is often overlooked by visiting anglers.

Local anglers know very well that the Lewis lays claim to one of the best trophy brown trout populations in the park.

This is a limited time offer though when trout enter the river from Shoshone Lake and Lewis Lake to spawn.

Find out what the locals know in this DIY guide to fishing the Lewis River system.

Falls on the Lewis River in Yellowstone National Park

The river rises at Shoshone Lake, then passes through what locals refer to as “The Channel” before it meets Lewis Lake, Yellowstone National Park’s second largest backcountry Lake.

From the lake, the Lewis River meanders through flat meadows before descending into a deep canyon. At the furthest end, the Lewis makes its confluence with the Snake a little north of the Yellowstone southern boundary line.

It’s trek from the Shoshone to the Snake traverses some rugged country and only those who are comfortable traversing the often steep and rocky terrain off the beaten path tend to fish the Lewis. If you can hack it, portions of Lewis River are one of the best and least fished streams in Yellowstone.

What can you expect to find if you do visit the Lewis? It depends on what section you decide to fish. What you can count on is big browns and lake trout in the Channel, brookies and browns in the meadows, and many westslope cutthroats in the canyon and tailwater near the confluence of the Lewis and Snake Rivers.

The season of the year obviously makes a significant impact on fishing conditions.  In the fall big brown trout leave Shoshone and Lewis Lakes to spawn in the upper Lewis channel between the lakes.  Lake Trout follow the browns, presumably to feast on their eggs and the brown trout themselves.

Spawning brown trout also run up the Snake to the lower Lewis from Jackson Lake south of Yellowstone in Grand Teton National Park.  Both spawning runs are the stuff of legends and attracts a fair number of local anglers. The rest of the year the Lewis is mostly under fished.

The Lewis River may be the final destination of your trip, or a quick stop on your way somewhere else. If you are near the southern border of Yellowstone, you should definitely give the Lewis River a try if you can. You will not leave disappointed. 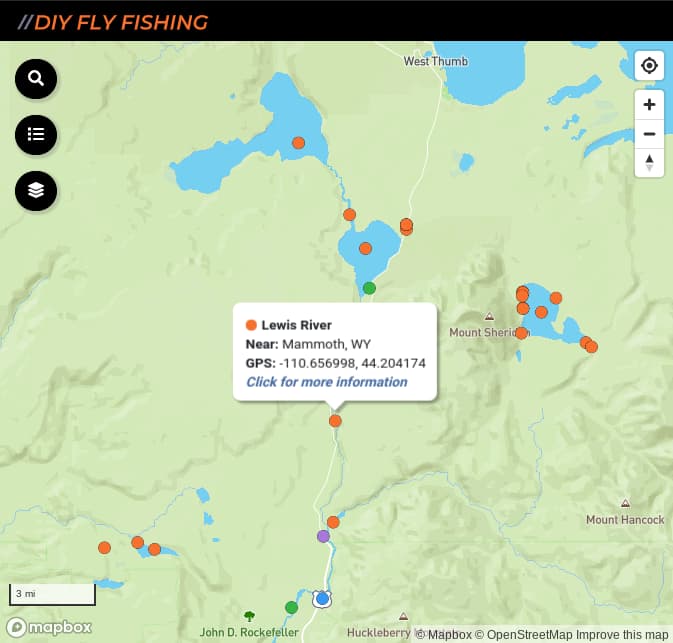 For big brown trout and lake trout, you want to head to the Lewis River channel between Shoshone and Lewis Lakes. You’ll need to hike about 3 miles or so from the highway to reach Lewis Lake and the channel outlet, and another 4 miles up the channel to reach Shoshone Lake.

Plan on a backpacking trip to get up there and back with an overnight stay. You’ll need a permit from the park authorities, but it is fairly easy to obtain for Lewis Lake and Shoshone.

If you plan to fish The Channel (the 3 mile stretch from Shoshone Lake to Lewis Lake) for brown and lake trout, be prepared for fast action when you get there. The local browns and lake trout are highly aggressive carnivores.

The most challenging stretch of the river is the Meadows that extend from Lewis Lake to the Lewis River Canyon. The brown and brook trout here are wily and cunning that prefer precise matching patterns that are landed softly on the surface of the clear water. It may be closest to the highway, but it is definitely not a section of river for the novice angler.

If you are a novice, you may do better fishing down in and below Lewis River Canyon. It’s a tough hike, but there are loads of cutthroats there that are especially hungry during the warm summer months.

The best time to visit the Lewis River depends on the section you want to fish. If you plan on hitting “The Channel”, your best time of year to visit is in the late fall days of October before the park closes for winter. Check local conditions and records for when the major trout runs of browns and lake trout will occur.

If you think you are skilled enough for the Lewis Meadows, plan for late June to early July, and September to October for the major hatches along this section.  The Green Drake hatch in late June is one of the most significant.

Lewis River Canyon fishes best in July too, and if you are just after cutthroats and not challenging your angler skills, visit the canyon for some easier prey.  The only problem is getting there.

A glimpse of Lewis River Canyon - still want to fish it?

Here are some recommended fly patterns for each section of the Lewis:

A 9-foot 6-wt fly rod with floating line is recommended for fishing dry flies, nymphs and streamers.  A tapered 9-foot leader, with tippet size 3X to 5X to match the flies you are throwing, is pretty standard.

Bug spray is a must in the summer, as the mosquitoes are thick in the meadows and around “The Channel”. Waders are a must have in the meadows and down in the canyon as well. You can find places that are decent bank fishing in the upper reaches closer to the lakes.

There are a number of area fly shops that can provide a Lewis River fly fishing report and guide services (if interested). A few to check out are listed below.

Anglers 16 years of age or older must get a Yellowstone National Park fishing permit to fish in the park. State fishing licenses are not valid and aren't required.  Fishing permits may be purchased at numerous locations in and around the park, including area fly shops, park visitor centers, backcountry offices, and Yellowstone General Stores.

Tackle limitations that pertain to fly fishing include:

Be sure to check the most recent Yellowstone fishing regulations before heading out.

The Lewis River is closest to Jackson Hole, Wyoming, so fly into the airport there and drive northward into the park. There are plenty of places to stay in Jackson Hole if you prefer the traditional accommodations of the motel and hotel, but you can also find lodging at local ranches and cabins in the area, too.

Some anglers like to stay at the lodge near Old Faithful in central Yellowstone and then drive to the nearest trailhead that will take them up to Lewis Lake and Shoshone. Whatever you decide to do, don’t overlook local vacation rentals when looking for a deal on your stay. You can find some wonderful hidden gems to revisit year after year that way.