[DIY] Guide to the Best Fly Fishing in Kentucky

The Bluegrass State isn’t just the home to derbies and a lot of yummy fried foods, it’s also a great fly fishing destination. In fact, the state boasts dozens of rivers and countless lakes, and the Kentucky Department of Fish and Wildlife Resources and the U.S. Fish and Wildlife Service stock a large number of these with trout. If you’re in search of an angling adventure, Kentucky has you covered no matter where in the state you plan on going.

Like many states, Kentucky imposes some restrictions on trout fishing. This is necessary in order to help non-native populations to survive, thrive, and grow. Because the nearly one million fish must be brought in from a hatchery, and cannot reproduce in their non-native environment, it’s vital that the state regulate their existence and make sure conditions are perfect for them to provide fishermen with a rewarding experience. As long as you’re familiar with the rules and regulations, you’ll find no lack of places to hone your craft among the many bodies of water the state has to offer. 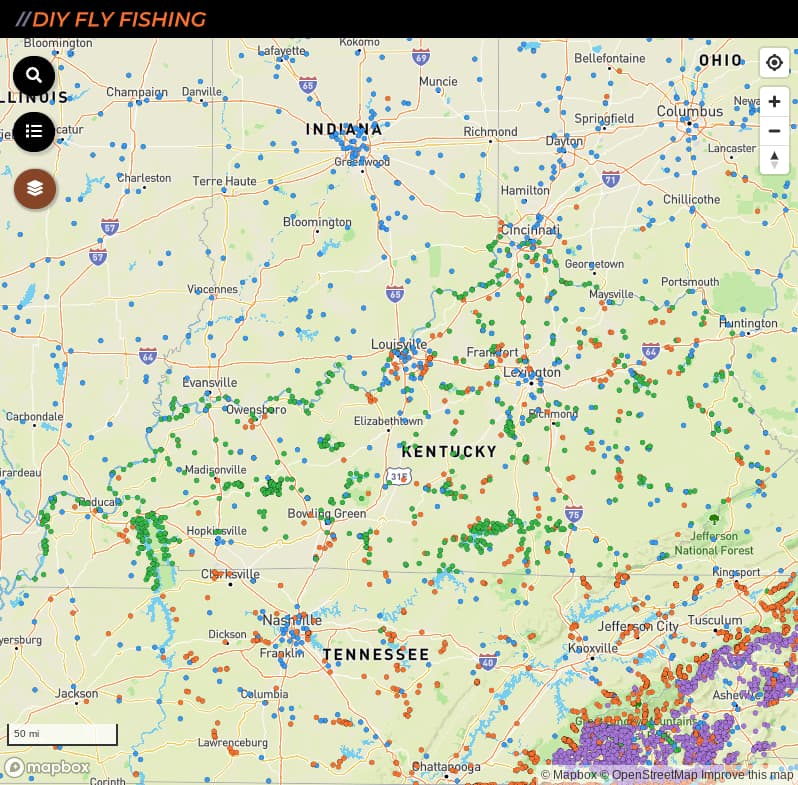 With the state stocking more than 100 waters, plus the rivers and streams that grace the landscape across the state, it can be hard to know where to start. There a few locations that stand out as favorites and are must-see fly fishing destinations for Kentucky visitors.

This 75-mile tailwater that runs below Lake Cumberland in southern Kentucky is the result of waters that are released through the Wolf Creek Dam, a U.S. Army Corps of Engineers project. The waterway is a popular fly fishing site, and with good reason – it receives yearly stock of around 160,000 rainbows and 38,000 browns each year, making it a premier location for the angler.

While there are a few places on the Cumberland where wading is possible, it’s highly recommended that you fly fish this tailwater by boat. Not only is a boat preferable due to the large ratio of deep areas, but because the river is quite lengthy, a boat comes in handy to navigate between good fishing sites without having to muck along for miles. A drifter with a motor is your best bet.

The Wolf Creek Dam has four generators, and any of them could be operating at a given point. The fishing is better when the water is lower. The Cumberland is unique in that it rises extremely slowly. In other words, when they start generating power, you are not in danger of a 12-foot rise within a few minutes’ time. The water travels at about four miles per hour, and the path is so long that it takes quite a while before you’ll have to worry about switching spots or climbing the bank. There is a release schedule available, so you can plan your trip accordingly.

Access can be tricky, which is another reason to bring a boat. There are more public access points the closer you are to the dam, but the further along you go, it could be miles between access points. Fortunately, there are a number of areas to launch a boat, and even fish right offshore. The Kendall Recreation Area ramp is just below the dam, off of U.S. 127. Nearby is a hatchery creek outflow, which is a choice area to cast, and Boyd’s Bar, which is known to yield rainbows and browns aplenty.

While not the best choice for the casual wader who just wants to get to the bank quickly, spend some time leisurely casting, and get out quickly as well, Cumberland River is a great option with plenty of 5+ pounders for those fly fishermen who either thrive on the challenge of locating a good wading spot, or have a boat and love to use it.

You may keep one brown trout per day on the Cumberland, and it must be at least 20 inches. You can keep five rainbows, with just one over 20 inches, and one brook at least 15 inches in size. These regulations apply to all of the river’s tributary streams as well.

Located outside Fort Knox, Otter Creek not only receives 1700 trout from the KDFWR, but Fort Knox also adds 15,000 of the fish on top of those. You’ll need to buy a fishing permit (as well as a Kentucky fishing license) but you then get the benefit of easy access through the Otter Creek Park. Check with Fort Knox Hunt Control ahead of time, as the park sometimes closes down specific sections for different applications like training. After catch-and-release ends in April, you can score some hefty trout and serve them up on your dinner table (following state limit laws, of course).

There are plenty of other great options for some casual on-the-fly action. These include:

As of 2017, the trout program includes six streams (17.2 miles) that have natural brook trout populations and four tailwaters (79.9 miles) and 16 streams (71.5 miles) for put-grow-take brown trout or rainbow trout fisheries.

There is one tailwater (75.2 miles) managed for a put-grow-take brook trout fishery. There are a total of 290.2 miles (88.0 miles in tailwaters) of trout fisheries in 63 streams that include 14 tailwaters.

Fifty-two percent (149.5 mi) of the total miles of trout stream fisheries is represented by brown trout.

There are 8.7 miles in two streams that are managed for put-and-take and put-grow-take brown and rainbow trout fisheries at Fort Campbell Military Reservation that lies in both Kentucky and Tennessee.

Kentucky trout streams are classified by the quality of the stream as measured by the number of days per year the stream remains below temperatures that can support trout.  There are four classes of trout streams in Kentucky with Class I streams being the highest quality.

CLASS I TROUT STREAMS: exceptional trout streams that have a minimal number of days (<5) above 72° F in a calendar year and have a maximum temperature that remains below 72° F during the period June-September. These streams have the maximum holdover potential and also include those streams with natural brook trout populations.

Catch and release required of all brook trout and no use of live bait at Dog Fork, Parched Corn Creek, Shillalah Creek below the Cumberland Gap National Historical Park (CGNHP), and Poor Fork above Hwy 932 bridge.

CLASS II TROUT STREAMS: high quality trout streams that have a low number of days (<25) above 72° F in a calendar year and have a maximum temperature that remains below 75° F during the period June-September. These streams may still provide holdover trout but are not considered exceptional.

CLASS III TROUT STREAMS: general trout streams that have a significant number of days (>25) above 72° F in a calendar year and most likely will be unable to provide significant carry-over to the next year. Class III streams are separated from Class IV streams by having a lower number of days that the stream remains at or above 73° F during the month of June and a lower maximum stream temperature in June.

CLASS IV TROUT STREAMS: marginal trout streams that have a significant number of days (>25) above 72° F in a calendar year and most likely will be unable to provide significant carry-over to the next year. Class IV streams are separated from Class III streams by having a higher number of days that the stream remains at or above 73° F during the month of June and a higher maximum stream temperature in June.

Best Time to Fish in Kentucky

Fishing is permitted year-round in Kentucky, and the state imposes different seasons, limits, and rules, depending upon the type of fish and the location where it is caught. You’ll want to read over the ﻿﻿﻿rules before planning your destination and timing, so that you can optimize your experience by keeping your catch if that’s what you desire.

You’ll also want to base your timing on hatches. At the Cumberland River there is a late winter blue-winged olive hatch, and one in October. Sulphurs hatch from mid-May through June, and Caddis tend to hatch in late winter to early spring.

You’ll want your chest-high waders, wading boots with studded rubber soles, a rain jacket, Polarized sunglasses (these allow you to see into the water better), a brimmed hat for sun protection, bug repellent, insect net for your head if you’re going during the warmer months, accessories such as nippers and a pocketknife, plus whatever flies and rods you want.

As to your rod, a 5 or 6 weight should suffice for most of your Kentucky fly fishing, with a 9-foot, 5X tippet for dry fly and a 7.5-foot 3-4X tippet for nymphing.

Best Flies for Fishing in Kentucky

Streamers tend to attract the larger trout – particularly in the Cumberland River – but nymphs and midges are crucial as well, and produce great results. Dry fly fishing during the caddis and mayfly hatches will yield the most lucrative take, and pay attention to the terrestrials as well during the late summer and fall.

Fishing licenses are available through the Kentucky Department of Fish and Wildlife Resources. Minors under the age of 16 do not need a fishing license, nor do residents fishing on their own land. Resident members of the service who are on a furlough greater than three days, as well as those fishing in Mammoth Cave National Park do not require a license either.

Kentucky Fly Fishing is Not to Be Missed

Kentucky has plenty to offer anglers, and even though trout are not native and cannot sustain a population on their own, the state works hard to maintain an incredible population throughout the hospitable waters that grace the landscape statewide.

There are quite a few separate limitations and regulations for various creeks, rivers, and lakes, so you’ll need to pay close attention to which ones apply during your planned fishing trip, but there’s plenty of the year when catch-and-release doesn’t apply so you’re sure to be able to configure exactly the right itinerary for your wants and needs.

Give Kentucky a chance and you’ll be rewarded with large populations of sizable fish, stunning landscapes full of local greenery and clear waters that will enhance your Kentucky fly fishing experience by leaps and bounds.

[DIY] Guide to the Best Fly Fishing in Kentucky