What comes to mind when you think of Iowa? Probably corn fields and plains as far as the eye can see. But this state harbors a secret – its dozens of rivers and lakes are actually excellent resources for the diehard angler.

The Hawkeye State not only offers tens of thousands of miles of rivers, creeks, and streams, but the DNR also engages in a highly active trout stocking program that keeps fishermen coming back and always offers a good challenge.

There are over 100 trout streams in Iowa, and all are situated in the northeast portion of the state. The interesting thing about this state’s trout fisheries is that most of them run through private land, and public access is provided to fishermen through agreements between the landowners and the DNR.

For the most part, these fish are not able to maintain their own population, so the state utilizes three hatcheries to provide fishermen with the opportunity to engage in this popular sport. There are, however, six trout fisheries in which naturally reproducing and sustaining browns and brook trout offer anglers exciting action.

Altogether the state boasts roughly 148 species of fish, including bass, channel catfish (the state fish and the most popular gamefish in the state), perch, pike, and sunfish.

If you’re headed to the Midwest, don’t count Iowa out of your fly fishing itinerary – you might just be pleasantly surprised. 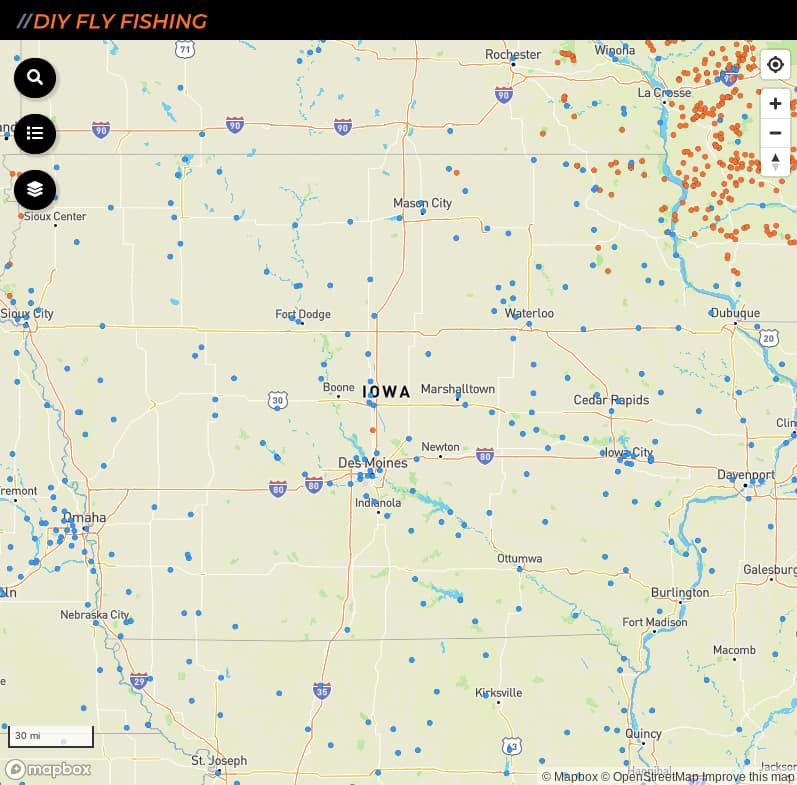 Best Places to Fish in Iowa

Indeed, it can be overwhelming, deciding exactly where to begin. There’s a reason why the trout streams are localized to the northeastern part of the state – this area, along with southwest Wisconsin and southeast Minnesota, is known as the Driftless Region.

This term is used to explain terrain that was not cut through by the last continental glacier, thousands of years ago. Because the land was not ground into “glacial drift”, it remains hospitable to the cold, crystal clear waters that allow a wild trout population to thrive.

Thanks to this lack of glacial drift, there are plenty of waters ideal for fly fishermen.

This 11-mile stretch – a tributary of the upper Mississippi – cuts right through the Yellow River State Forest, three miles west of Harpers Ferry. The state stocks the creek with catchable rainbows and brooks weekly from April through October. There are also wild brown trout, in estimated numbers of 136 per mile, making Paint a highly desirable fly fishing destination in Iowa.

Part of the draw of this area is that there are many amenities available to enhance anglers’ experiences. Not only is the stream access good, but there are also campsites that butt right up to suitable fishing spots, plus restrooms and a picnic area.

Paint Creek offers fly fishermen brooks, browns, and rainbows, with a daily bag limit of five and no length limit. And while you cast your line, you’ll revel in being surrounded by incredible natural beauty – tree-lined banks, lush foliage, and richly textured landscapes create a tranquil scene that awes.

This Upper Iowa River tributary is about ten miles in length and actually begins as Bee Creek in Minnesota – in fact, technically speaking you could hook a fish in Minnesota and land it in Iowa!

Considered one of Iowa’s premier fly fishing destinations, the creek is divided into two sections for angling purposes. The upper portion is stocked weekly from April to October, with 10-12 inch brookies and rainbows, and the portion below Highway 76 is designated catch-and-release and artificial lure only.

Waterloo is a favorite among both locals and visitors alike in large part due to its high wild brown trout population – at its peak, the creek was thought to have about 4000 browns per mile.

More recent numbers indicate specimens up to 23 inches long at a density of about 700 per mile. The healthy population, bigger size in comparison to the numerous tiny Iowa trout streams, and the creek’s path through serene pastures combine to make this an angler’s paradise that’s tough to beat.

This area is interesting because it runs straight through the Big Springs Trout Hatchery, six miles northwest of Elkader. You’ll enjoy camping sites, shore fishing with great access, and a carry-down boat launch.

The waterway is stocked with rainbows and brookies twice weekly from April through October. The width of the river combined with the surrounding landscape offers something very few Iowa trout streams can – the ability to forget worries about the backcast, or even practice a 50-foot cast.

The other beauty of Turkey River fly fishing is that there is no length limit on trout, and no catch-and-release. As an added bonus, the corridor also contains smallmouths and walleye so you never know what you might find on the other end of the line.

And, you never know how big they’ll be – word on the street is that even the little guys in this area put up a fight worthy of a much larger fish in any other stream. So don’t jump to conclusions about the size of what’s giving you all that struggle.

This waterway may only be fished by canoe or kayak unless you get landowner permission. There is public access with a carry-down boat launch available at the Volney Canoe Access.

The river runs roughly between Waterville and the Yellow River State Forest, and is stocked yearly with fingerling browns and rainbows. Bag limit is five with no length limit for the trout, although you may also hook a smallmouth which must be a minimum of 12 inches to keep. White suckers in the Yellow River have no limit.

While the fact that you can’t wade or walk is inconvenient, if you’ve got a canoe it might be worth the effort, as the state deposits an average of 50,000 fish yearly.

Best Time to Fish in Iowa

Fishing is year-round in Iowa, so the best time to go is whenever is best for you. Each season offers its own quirks. A spring rain can dislodge food and turn your day into a fishing glut, provided you’re using nymphs and streamers rather than dry flies.

Summer brings hatches, which is advantageous to fly fishermen, but it will also reduce the spread of cold-water species, causing them to stick closer to their chilly water sources (such as the hatchery at Turkey River), rather than moving up or downstream.

Fall is ideal for trout fly fishing, offering nice weather and a range of bait options. Winter can be a challenge to the fly fisherman but you could get lucky simply on the merit of the fish having not seen a lure in quite a while.

Bring along the standard gear – hip or waist waders, polarized sunglasses, broad-brimmed hat, sunscreen, bug spray, rain jacket or windbreaker, and a pack to hold small items. Felt soles on your boots will allow for better stealth than rubber or cleats. For your rod, the smaller trout streams of Iowa call for about a 4 weight, no longer than 8.5 feet, with 7.5 and 9-foot leaders with tippets from 3X to 5X.

When it comes to flies, a good selection for this state includes:

Streamers are useful to have on-hand for autumn – try out some bright colors and patterns. On Waterloo Creek in late summer you might want to pull out your grasshopper imitator, particularly in the catch-and-release section. As always, watch the hatches, consult local fly shops if possible, and match the hatch as closely as possible.

You will also need a fishing license from the Iowa Department of Natural Resources. You can purchase these in person or online.

A resident license costs $19 while a non-resident runs $41. If you’re going to trout fish, you’ll need to pay the trout fee, which is $13 for residents and $15.00 for non-residents.

There are also resident and non-resident one-day and seven-day options, and discounts for veterans.

Children under the age of 16 do not need a fishing license, although interestingly, they do need to have the trout fee in order to fish for or possess trout.

If you’re anywhere near Iowa, it’s worth checking out the extensive network of trout fisheries that the state has to offer.

Like other states, they have varying regulations and catch limits depending upon the fish species and location, but unlike many other states, Iowa has an outstanding DNR website with thorough and comprehensive information on all of their fishing sites, and even advice, how to’s, maps, fishing reports, and much more.

The DNR puts exceptional effort into the improvement and promotion of their angling resources, so if you’re out that way, take advantage of the many fly fishing opportunities in Iowa.