One of the smaller rivers in Yellowstone National Park, the Gardner River can be found in northwest corner of the park.

It winds its way through the park to join with the Yellowstone River near the park boundary in the town of Gardiner, Montana.

Despite its small size, the Gardner is one of the best fishing rivers in the park all season long.

The Gardner can be thought of in three sections. The upper river from the headwaters to the Sheepeater Cliff Picnic Area consists of meadows reminiscent of Slough Creek or Soda Butte Creek. Brook trout flourish in the headwaters and upper reach of the Gardner.

The middle Gardner is fast canyon water with long runs of pocket water interspersed with pools and runs. The Sheepeater Canyon and Gardner Canyon makes up this section of the Gardner River.

The lower Gardner from Boiling River to the confluence with the Yellowstone River is similar but with easier access from the Mammoth–Gardiner road.

The middle and lower sections contain good populations of rainbow, cutthroat and brown trout. In the late fall, the Gardner is known for its annual run of spawning browns which travel up the river from the Yellowstone.

The Gardner River is home to four different trout species including brook trout (technically a char), rainbow trout, Yellowstone cutthroat and brown trout.  Catching at least one of each in single day is possible and is considered a "grand slam".

The headwaters of Gardner River are formed up in a high altitude meadow, making its way down from here to a confluence with the Yellowstone River at the lowest altitude point in the park itself. Along the way, you will pass Osprey Falls (more than 100 feet high), and the hot spring fed Boiling river.

Osprey Falls cuts off fish populations above and below it. Above the falls, the Gardner is your standard pocket water fishing stream, with deep, slow-moving pools and boulder gardens strewn on both banks along its length from the headwaters to Osprey Falls. There are mostly small brook trout here, and not much else. 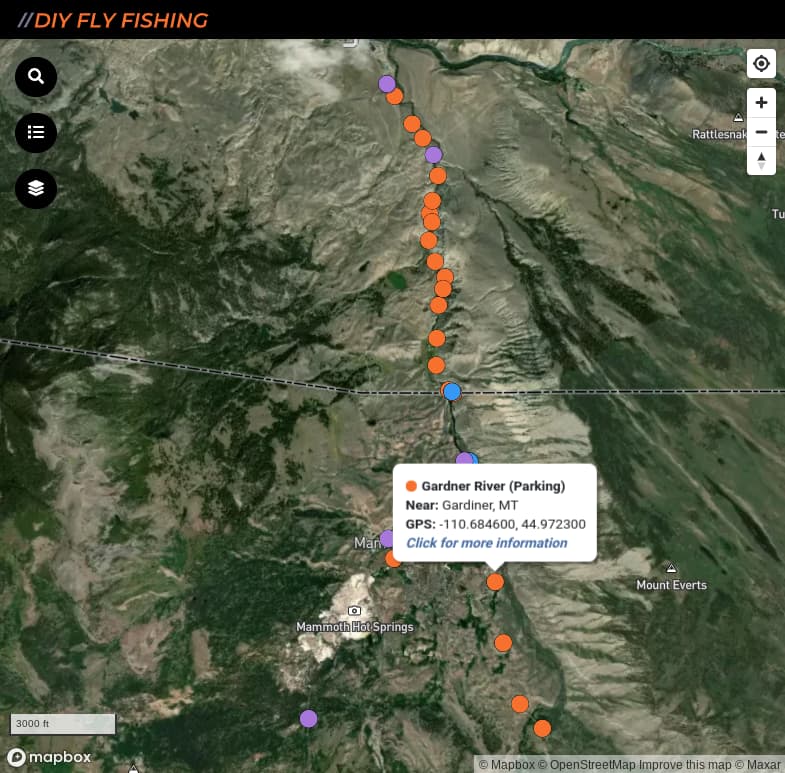 To get to the Upper Gardner, take the Mammoth-Norris Road about 7 miles south of Mammoth. The Upper Gardner is a good spot for beginners, and the fast-moving waters have fish jumping at even the most basic of fly patterns that look like food all season long.

Sheepeater Canyon (above Osprey Falls) can be accessed east of the Mammoth-Norris Road. The canyon is 6 miles to the falls, though there are mostly brook trout here with some smaller browns and rainbows at the base of the falls themselves.

Gardner Canyon marks the beginning of the Lower Gardner. Five miles downstream of the falls in the canyon is where to go to get the big trout. Cutthroat, rainbow, and brown are all common here, and most average 15-20 inches in length.

To access Gardner Canyon, take the Lava Creek Trail to the river itself from the Mammoth Campground. You can also reach it from the 4th Parallel Bridge, roughly 2.5 miles from the North Entrance to the park.

You can park here and follow the trail upstream to Boiling Springs and beyond to fish the fast-moving riffles and pocket water here. You also have access from here to Fawn Creek, Indian Creek, and Panther Creek, all excellent fishing spots in their own right.

There isn't a wrong time to visit the Gardner River for fly fishing during Yellowstone National Park's season of operation. From Memorial Day Weekend to the last Sunday in November, the waters fish well soon after runoff and continue to do so through the summer and into the fall.

May and June see big hatches of yellow stoneflies and salmon flies, and you have a chance to land some big rainbows and cutthroat. The browns start spawning in the fall, and that's when it's best to try your luck for the big trophy fish.

Beginners would do well to stick to the waters above the falls in the spring and summer, then work their way down river as summer comes into its full and moves into the colder autumn months.

It's one of the most productive rivers in the park, and for that reason, it can get crowded during the summer tourist season. Many visitors also like to swim in the Boiling River all season long, so be aware that you may be competing for parking space in some spots.

The upper river is less popular due to its more remote location and much colder water, so head there first if you are looking to avoid the crowds.

As far as patterns for flies are concerned, if you are fishing downstream of Osprey Falls, you don't need to worry too much about precise patterns. The water here moves so fast most trout will jump at most attractor patterns.

As you move downstream toward the Boiling River, stick to salmon fly and golden stonefly patterns, particularly in midsummer.

Fall brings the terrestrial season to the tailwater and dry-droppers tend to work well.

The preferred rod on the Upper Gardner is a 9-foot rod in 3 or 4 weight, changing up to 5 weight for the waters of the Lower Gardner.

Although high runoff can impair early summer fishing, the Gardner does get a reliable hatch of large stoneflies in June and July.

Caddis hatches are the river’s best during the summer and fall. Mayflies and Pale Morning Duns make for good action too. Evenings are the best time to fish the Gardner in the summer.

In July, choose an attractor dry fly such as a PMX, Stimulator, or Royal Wulff in a #12 or #14. The same flies work in August as well, but a small hopper pattern will also be good choice.

There are a number of area fly shops that publish Gardner River fly fishing reports and related information. A few to check out are listed below.

Catch and release for all cutthroat and mountain whitefish. Check the Yellowstone National Park fishing regulations for more information regarding the Gardner River.

Make sure you have your permit handy, as the rangers are vigilant about checking. Also, remember that felt-soled wading boots are not permitted.

Fly into Bozeman Airport and drive yourself to the Northern Entrance of Yellowstone National Park. Do yourself a favor and take the scenic route through Paradise Valley out of Livingston. You will not regret the detour one bit.

As far as where to stay, Bozeman has plenty of traditional and non-traditional accommodations, and local ranchers in the surrounding area near the park often rent rooms to tourists during peak season.

Make sure you check out local vacation rentals as well for those surprise deals on a stay that are far below local hotel and motel daily rates.

Regardless of the time of year or where you stay, Yellowstone National Park is always beautiful to behold.