In 1995, the Arkansas state legislature officially changed the state’s nickname from The Land of Opportunity to The Natural State. This is a fitting choice, and tells you just exactly how much the land has to offer to a fly fisherman. Not only will you find a robust trout population, but while you’re casting your line you’ll be surrounding by incredible scenery. Arkansas is an abundant blend of mountains, woodlands, valleys, plains, and sparkling streams and lakes that are teeming with wildlife. 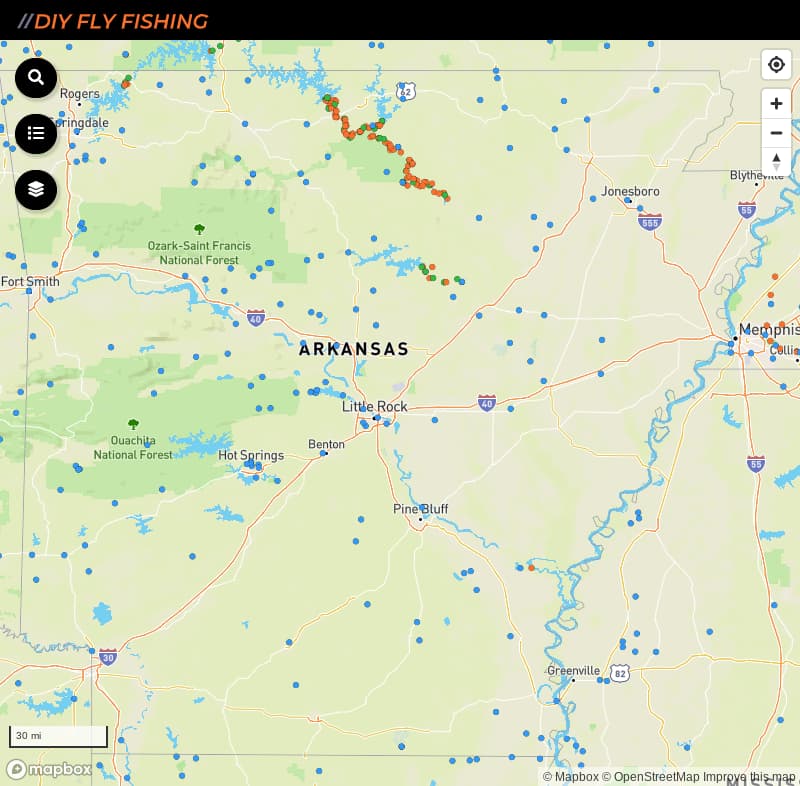 While Arkansas doesn’t have an official state fish, they certainly have no shortage of the finned creatures. Bass fans will find smallmouth, largemouth, spotted, stripes, yellow, white, and hybrid striped. Trout – a favorite of fly fishermen everywhere – although not native, are also prolific, with brook, rainbow, brown, lake and an unusual species called cutthroat, which take their name from a bright orange swathe of color under their jaw.

So grab your rod and your favorite flies and choose from among the best fishing holes Arkansas has to offer.

Best Places to Fish in Arkansas

The biggest problem fly fisherman will have in this state is choosing from among the dizzying array of waters that dot and cut through the landscape. You’ll be hard pressed to find a corner of the state that is not graced with some form of aquatic activity – from Beaver Lake up in the far northwest corner all the way to the Mississippi curling up the eastern border. The imposing Arkansas River serves as a centerpiece, slicing directly through the center and dipping slightly southward as it meets up with the Mississippi. Among the 9700 miles of streams and rivers, and 600,000 acres of lakes, here are a few great places to start.

This highly acclaimed anglers’ paradise is one of a few – if not the – most popular fly fishing area in the state. Four dams in north-central Arkansas make up the tailwaters that give the White River such a widespread reputation for good fly fishing. All of these dams are stocked with rainbow and browns, and three have brookies and cutthroat as well.

Beaver Tailwater – this fishery is created by the Beaver Dam near Eureka Springs. This seven-mile long corridor of chilly waters is home to rainbow and brown trout, as well as white bass, walleye, some stripers, and hybrid bass. Boat access is available through Dam Site Park and at Houseman Access just east of Busch, and wading accesses are available at Dam Site Park and Parker Bend.

Bull Shoals Dam – this stretch is the longest of the White River tailwaters, at 90 miles in length. These waters offer three catch and release areas, and an abundance of pools, pockets, and runs. It’s not uncommon to hook a 16-20-inch trout, and you can keep up to five per day including no more than one brown (24 or inches or longer), two cutthroat (16+ inches), and two brook (14+ inches). There are no length limits on rainbows. Public access is available via Bull Shoals White River State Park below the dam.

This tailwater created by the Greers Ferry Dam is home to a national fish hatchery, and is located less than an hour’s drive north of Little Rock. It contains wild trout which reproduce naturally, and you can also find rainbows, cutthroat, and brookies here. Vegetation and sow bugs abound, which cause the tailwater to produce some impressively sized specimens. Access is plentiful, there are several public points all the way from the dam to about 30 miles below it.

Dam tailwaters require that you be alert to changes in the water level – when the generators are active, the water rise can rise quickly so if you notice any changes make sure you’re able to move to the bank quickly.

This natural treasure stands out among the crowd of Arkansas trout fisheries due to the fact that its water comes from Mother Nature rather than from a manmade lake. Between the spring and the newly-restored Dam #3 runs 2.5 miles of riffle that may yield you browns, rainbows, brooks, or cutthroats (known as the Arkansas Grand Slam if you catch all four).

The Jim Hinkle Spring River State Fish Hatchery is situated near the dam and is responsible for supplying not only Spring River, but several other locations as well, with a total of over a million rainbow trout per year. The dam improvements significantly increased the hatchery’s production, and further enhancements have been – and are continuing to be – done in order to improve the fishing experience in the area surrounding the spring.

Wading access is available at the spring itself, in addition to Lassiter, Cold Springs, at the dam, and Bayou. While there are suitable wading areas both above and below the dam, you should take precautions due to slippery spots and carry a wading staff.

This scenic waterway runs through the Ouachitas Mountains of southwestern Arkansas. The breathtaking natural beauty of the mountainous countryside combines with clear pools, rushing whitewaters, and a variety of fish to create an idyllic fly fisherman’s paradise. Along with the native rock bass, sunfish, and smallmouth bass, the state stocks rainbows in spring and winter at the Albert Pike Campground.

Due to the catch-and-release right below the dam from May 1 until October 15, the fish get wise after a while so you might have to be patient. But the AGFC stocks tens of thousands of rainbows in this area each season so you shouldn’t have too much trouble getting a bite.

For those around the Little Rock metro, there’s Rock Creek in Boyle Park. This little creek offers some good shallow water fly fishing, and the state stocks the park’s pond with catchable rainbows.

Go just a bit southwest of Little Rock and you’ll find Lake Catherine – one of five waters known as the Diamond Lakes. The Carpenter Dam here creates a tailrace suitable to wading and stocked with rainbows.

Best Time to Fish in Arkansas

The White River is known for coughing up trophy fish all year round. During the first six months of the year you’ll have the best luck with sink tips and large streamers due to the high water. In early summer you’ll find that nymph fishing is lucrative and the water depth is usually amenable for drifting. During late summer through December, the river’s tailwaters are typically low, making for good dry fly fishing. As the experts of this popular waterway will tell you, any time of year is good, it is only your method that will change.

The Little Red River and Mammoth Spring are also great any time of the year, even on the coldest days, due to the consistency of the water temperature. Spring yields good rainbow opportunities, while fall is your best bet for the bigger browns. At Little Red, the water is generally too high for wading in the spring so you’ll want to use streamers from the banks.

Little Mo is a favorite in winter and spring – anglers find that the biting is vigorous, making these great times for beginners and those teaching their children to fly fish. The March brown hatch happens from February to May, while light cahills make late summer through October ideal for a dry fly. If you’re going for quantity, February to April yield the most fish, while June to October mean better quality.

In general, about a 5 weight 9-foot rod with a 5X or 6X tippet and 9-foot leader will be your best bet.

Streamers come in handy in locations where the water’s too deep for wading and at the Little Red River where leeches, sculpins, minnows, and shad are common food.

July through September sees terrestrials at the White River. As with all of your fly fishing adventures, you’ll do best to hit up some local shops for area-specific ties.

Anglers 16 and older must carry an Arkansas fishing license, except when fishing in a licensed put-and-take pay lake. These may be obtained from the AGFC for $10.50 if you’re a resident and $50 for non-residents. You must also have a trout license for certain waters, so check the r﻿﻿ules an﻿﻿d regulations to be sure you’re adhering to the law.

There’s no doubt this state has a bevy of choices for fly fishermen to pick from, and not only are the trout and other species plentiful, but the scenic areas surrounding the rivers, streams, and mountains make for a visually stunning experience. Arkansas may not be the first destination vacationers think of but it’s the perfect getaway for those seeking a beautiful environment in which to cast their line.