It's hard to find a place as beautiful, serene, and untouched as Alaska, and with that said you can bet you're going to find all kinds of incredible fly fishing opportunities. What makes the state so special is that you can get as remote as you like with your fishing. You can even charter a float plane that will take you to a deserted island or lake just so you can enjoy fishing in complete solitude. In Alaska you won’t have to worry about fighting crowds of anglers no matter when you fish. 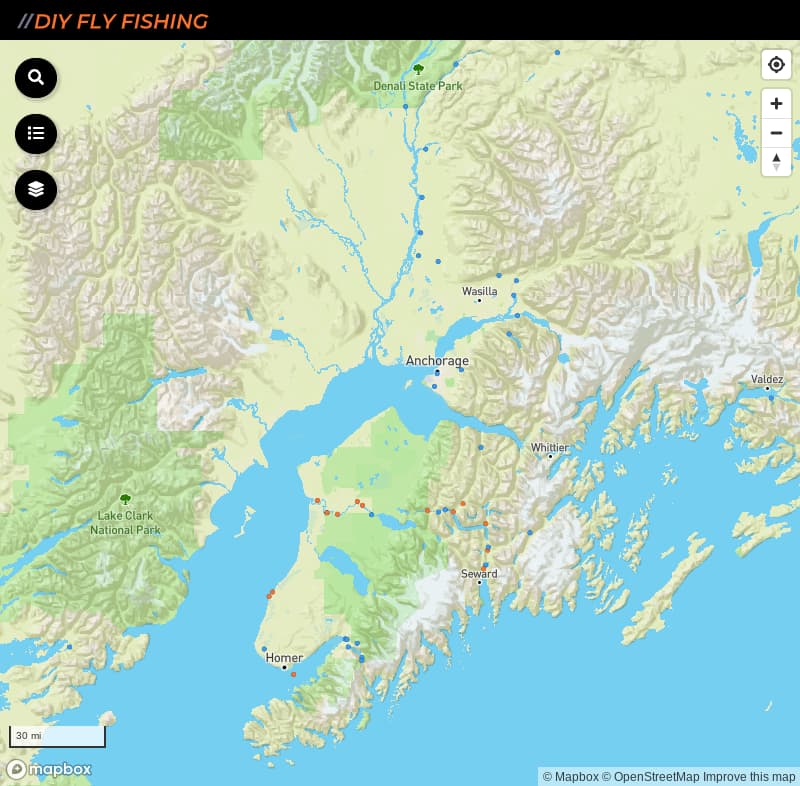 Looking at s﻿﻿﻿﻿ome of the﻿﻿﻿﻿ statistics, it's hard to believe but the state offers 3,000 streams and rivers, and more than three million lakes. Yes you read that correct, three million. Just try to wrap your mind around what that means as an angler. Of course you've got both salt water and fresh water options to choose from. There are opportunities to just get away for a few hours or create your own overnight fishing getaways.

In this guide we will take a look at some of the top spots for fly fishing in Alaska, even though it’s hard to narrow it down to just a few. We will also examine when the official fishing season is, and the gear you’ll want to bring with you.

Best Places to Fish in Alaska

In some states in the country, it’s really easy to pick a couple top streams and rivers that you’ve heard about and read about, and now you want to visit. With Alaska, this isn’t the case at all. Instead, it feels like the entire state is just one big area waiting to be discovered and enjoyed by you. When it comes to the style of fishing, fly fishing is by far the method of choice here in Alaska. The typical fish you'll be catching are bass, trout, and salmon.

Here’s a look at some standout locations as far as fly fishing in Alaska goes. It’s important to note that the state is massive, as are the opportunities. Sometimes the greatest locations end up being those that you find as you head out on a hike or drive, so don’t be afraid to get out there and do a little exploring with a map in your hands.

The Alagnak River is found in southwestern Alaska in the Bristol Bay Region. This particular destination made the list in Travel and Leisure's Best Places to Fly Fish in 2015. The typical trout you'll find here are rainbow and you'll also find all of the Pacific salmon species (five in total), and arctic grayling. What makes this area so spectacular is that the fish you'll be catching tend to be much bigger than the average size. It doesn't matter if you are an experienced angler or a beginner, you'll be able to fish this river with ease. There is a lodge located at Bristol Bay so if you choose you can stay right there and make the fishing all the more convenient. The river is a premier location that won’t leave you disappointed.

The Kenai River is found in southcentral Alaska and is very popular with anglers and guided fly fishing tours. In particular the Upper Kenai River tends to be quite popular as this is where you'll catch some massive king salmon and rainbow trout. This river is usually preferred by drift boat. Many people deem this to be the most popular river for fishing in all of the state. An interesting fact is that it is the world record holder for the largest king salmon ever caught. It weighed in at just over 97 pounds and was caught in 1985. People flock to this river in hopes of catching their own record holder.

The river itself is 82 miles in length and travels from Kenai Lake all the way to the ocean. Along the way it drops in elevation.

The Denali National Park and Preserve is found in the state's interior and is another top destination for fly fishing. You can plan a half day, full day, or many days here and never run out of exciting opportunities. A good spot within the park is the Nenana River, which isn't too far inside the park entrance. Here you'll be able to fish for arctic grayling and rainbow trout. In this area you can fish by shore or by wading. As for the skill level, even beginners can handle this river. Because it's not far from the park entrance it makes for a great one-day adventure.

Within Denali National Park are a number of other great rivers and streams, and many of them are accessible from lodges found on the grounds. This can make for a great way to enjoy the park and spend more than just one day there. Keep in mind the areas that are “the best” for fly fishing tend to change throughout the season, so checking in with local fly and gear shops is a great way to find out where these top spots are.

Best Time to Fish in Alaska

The typical fishing season runs from April through to October in much of Alaska's rivers and lakes. With that in mind there are months that are better than others. Most anglers would agree that you can't beat the fishing in August and September. Just like with most states, this is when the largest varieties of hatches are taking place.

Unlike other states in the country, you won’t find any fishing once the winter cold sets, which happens pretty early here in Alaska. By the end of October the fishing season is as good as over, except for halibut, which can be fished year-round. Quite frankly, the weather conditions aren’t ideal for anglers to be out in the winter for any length of time anyways, as it gets too cold and there is too much snow.

The hatch season can tend to be a little shorter here in Alaska, which comes as no surprise thanks to the weather. The pale morning dun starts up in mid-May and then the caddis and mayflies follow.

What makes fishing in Alaska a bit unique as far as your gear is concerned is that you will be catching some pretty large sized trout. With that in mind you want to pick your gear accordingly.

If you're heading to the large lakes and rivers opt for a rod between 9 feet and 10 feet. You can use a five weight with it. If you prefer more of the lower key streams and rivers where it's not quite as big, and the fish reflect that, then you can pick a nine-foot rod with either a four or five weight.

Your flies will be dependent on the season; as mentioned you are trying to match them to the current hatch. If heading out in early spring a good choice is fry and alevin patterns.

As you head into the summer, nymphs, dry flies, and mice make a great choice. Then in the fall you can use flesh flies.

These flies work especially well when trying to catch rainbow trout in particular, but keeping that golden rule of matching the fly to the hatch can be used with all fish.

Alaska does differ in that even though you want to try to match your hatch, it's not quite as important as it is in other states. Alaska features arctic climates, and this affects the fish and what they are looking to eat. If you’re not a resident or you’re new to fly fishing in the state, it’s a good idea to visit a local fly shop and get some tips and advice since the hatches can be a bit deceiving and differ quite a bit from region to region.

If you plan on fishing in Alaska you will need a valid state fishing license. These are available through the Alaska Department of Fish and Game and can be purchased as an annual resident license, or a non-resident license.

If you are a non-resident you can purchase a one year, 14 day, seven day, three day, or one day fishing license. Anyone who is 16 years of age and older requires this license. If you plan on fishing for king salmon, you will also need a special stamp.

In order to stand out and draw anglers from around the country, and even the world, a destination has to offer something unique. Alaska does this in spades and so much of it is due to its stunning untouched landscape.

You are truly in another world when you visit Alaska thanks to its arctic climate and landscape that you just won’t find in other areas of the United States. The fact that you can find species here that aren’t common in other states is another big draw for anglers.

For many people Alaska is that dream destination, that once-in-a-lifetime trip that just can’t be missed.