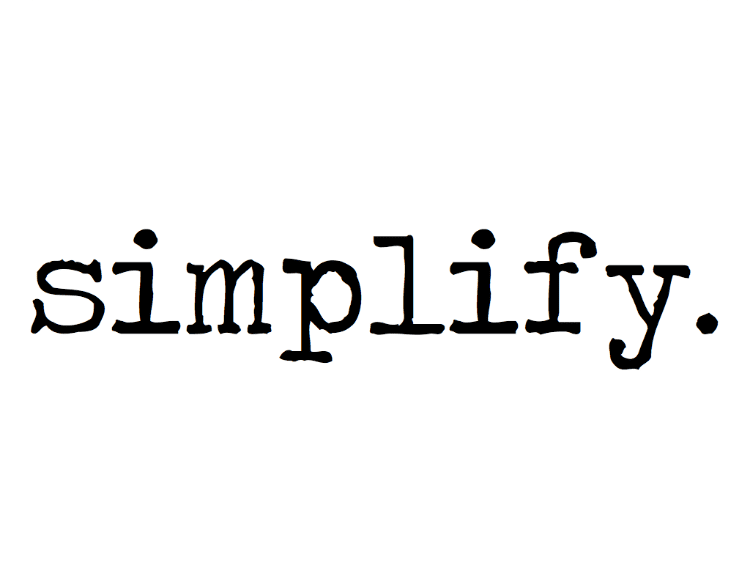 3 Tips How to Simplify Fly Fishing

This week’s Fly Fishing Tip is brought to us by RiverBum.com and Jake Ricks of Utah Fly Guides.

My wife has the term “simplify” in somewhat ornate creative vinyl letters stuck to a mirror over the dresser in our bedroom. I think she means something like we should simplify our lives. Or maybe it just looked “cute” and wise in whatever crafty location she purchased it. I like it fine but look at it a little differently. Knowing by hard experience that the shortest route to a fish is a straight line and that the most correct solution to matching a hatch is generally the simplest one I, of course, apply this advice to fly fishing first. Here are a few ways to simplify your fly fishing:

Pick your favorite flies and stick with them

I know, we here at RiverBum sell a lot of flies and I will be the first to admit that I have purchased or at least tied most of them at some point. However, when I find myself on the stream and picking a bug out of the box, I go with the same standard patterns most of the time. I won’t mention what these are exactly because you probably have your favorites too. That’s what’s important. Find a few flies that work more often than not for you and stick with them. You will find that you are more successful when you just pick a reasonable fly and fish it with confidence.

A partner of mine in our guide service, Utah Fly Guides, just posted a short video on YouTube that I think is an absolute work of art. It is all about short casts. The longer I guide and the more people I fish with the more I’m amazed at how many people pass up the easy fish close by and scare it by landing 30 feet of line on top of it in their attempts to catch fish on the other side of the river or 60 feet up stream. Learning to cast a long line is great and will pay off sometimes but the guy or girl that can cast 20 or 30 feet accurately will catch more fish, especially trout. The guy or girl that thinks to make the 10 foot cast before the 30 foot cast will catch even more. Oh, and if you can, just walk closer instead of trying to air out a whole fly line to catch a fish that isn’t going to see you and spook until you’re really close anyway. Walking is, at least in my estimation, simpler.

Cut down on the gadgetry

I know, once again, here at RiverBum we sell tons of really cool stuff and I admittedly own almost every gadget known to angler, but I really only use a few. This week I finally figured this one out a little. I had a cool little tool with a magnet for picking up small flies, a needle for clearing hook eyes, and a tube for nail knots. Maybe you’ve seen it. I liked it, however, I lost the tube/magnet end and poked myself with the stupid dangling needle about 6 times, even bleeding on several occasions, before I finally figured it out and simply tossed it. I haven’t missed it. Really, I use snips and floatant, a discarded fly for clearing hook eyes, and very occasionally a nail knot tool that I keep out of the way in a pocket. Works great for me.

I don’t mean to be a party pooper. I know that some of the fun of this sport is in the intricacies it presents, but I also know that most of the fun, at least for me, is in the catching of fish. That part really should be pretty simple.

DIY Guide to Fly Fishing the Eel River in California

Great read Ken. Simplifying fly fishing is always a topic of interest for me. Thanks for putting this up.

You bet Adam. I often have to resist the temptation to make fly fishing more complicated than it needs to be.